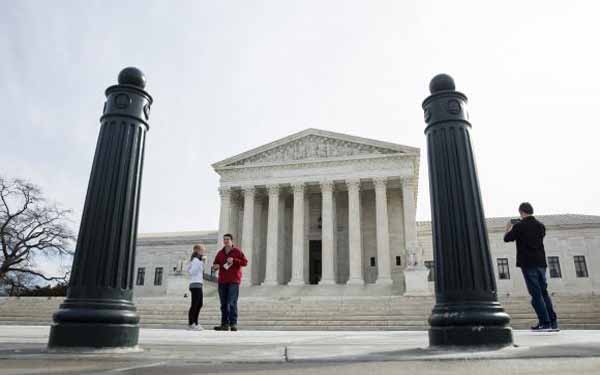 WASHINGTON — The Supreme Court has revived the University of Notre Dame’s effort to shield itself from an Obama administration policy to ensure all female employees are provided a full range of contraceptives, including those who work for religious schools and colleges.

The administration says Catholic colleges need not provide or pay for the disputed contraceptives themselves, but they must at least notify their insurer or the government so the coverage can be provided separately.

But Notre Dame told the justices it would be “complicit in sin” if it consented to this arrangement, which would trigger coverage for what it considers “abortion-inducing” contraceptives.

Last year, the 7th U.S. Circuit Court of Appeals in Chicago refused to temporarily shield Notre Dame while the issue was under appeal.

However, in a one-line order Monday, the justices granted Notre Dame’s appeal and told the 7th Circuit to take another look at the university’s claim that any involvement in the contraceptive policy violates its right to the free exercise of religion.

“We’re gratified” by the high court’s action, said Paul J. Browne, vice president for public affairs at Notre Dame. It “allows us to seek relief” from the policy. “Notre Dame continues to challenge the federal mandate as an infringement on our fundamental right to the free exercise of our Catholic faith,” he said.

The administration’s lawyers argued the appeal should have been turned down because Notre Dame, like other religious schools, “can now opt out of the contraceptive-coverage requirement.” They said the required notification simply alerts officials of the university’s religious objection.

Cecile Richards, president of the Planned Parenthood Action Fund, said it is “hard to believe we are still fighting for access to birth control. This is a case about paperwork, not religious liberty. Religious groups have been exempt from the birth control benefit all along.”

Obama’s health advisers first adopted the contraceptive policy as a regulation under the Affordable Care Act. Access to the full range of contraceptives at no cost was deemed to be a necessary part of preventive care.

Church and houses of worships were exempted from the requirement.

Last year, the high court in the Hobby Lobby case ruled that corporate employers who have a strong religious objection may refuse to provide certain contraceptives.

But in between the churches and corporations were the thousands of religiously affiliated schools, colleges, hospitals and charities. The administration adopted an “accommodation” that it said protected the religious rights of these employers as well as the rights of their female employees. It told employers like Notre Dame they need not provide the disputed contraceptives, so long as they notified their insurer or the Department of Health and Human Services. The contraceptives would then be provided separately to eligible employees.

Dozens of lawsuits have been filed to challenge that accommodation as a violation of religious liberty. The Supreme Court could agree this year to resolve the dispute.

But Notre Dame, unlike many other Catholic schools and colleges, did not win a temporary exemption. It was told it needed to comply with the administration policy while the appeals went forward.

It had notified the government in December 2013 of its objection to the providing the coverage. Two months later, the 7th Circuit Court in a 2-1 decision cited this action as one reason for refusing its request for a temporary total shield from the policy.

Notre Dame appealed to the Supreme Court and argued its religious liberty rights were being violated currently because it had to make the required notifications to the government.

On Monday, the Supreme Court vacated the 7th Circuit’s decision in Notre Dame vs. Burwell and said the university’s request for a temporary exemption should be reconsidered light of the Hobby Lobby decision.