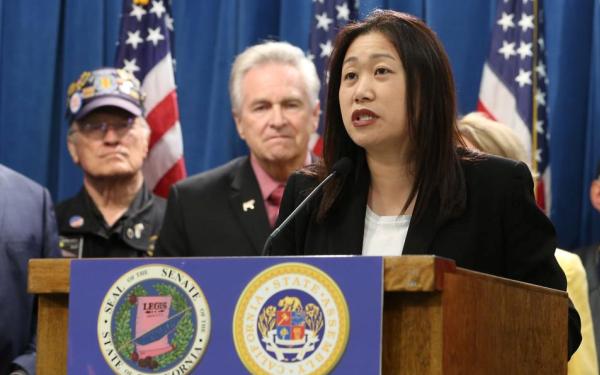 SACRAMENTO, Calif. — Outraged by an attempt to ban the United States flag from a lobby at the University of California, Irvine, Republican legislative leaders in California on Monday proposed a constitutional amendment that would protect Old Glory from being banished from state-funded colleges and universities.

The student executive council at UCI on Saturday vetoed a resolution approved by six undergraduate members of its legislative council that would have removed all flags from the common lobby area of the student government offices.

“I came to this country as an immigrant searching for freedom and democracy, and I would not be here today if it were not for the American flag,” Nguyen said, adding U.S. military men and women “fighting throughout the world deserve for us to make every effort to ensure that the American flag is proudly displayed at public universities and colleges throughout California.”

Several Vietnam veterans attended the news conference to support the constitutional amendment, which will be introduced Wednesday. The Irvine incident angered veterans including Ted Adams, president of a Sacramento chapter of Vietnam Veterans of America.

“What is going on down in Irvine is really appalling to me because I lost good friends defending our flag,” Adams said during the news conference. “I lost blood myself. I was wounded twice, so you don’t mess with my flag.”

Pete Conaty, who advocates for veterans at the California Capitol, said the Irvine incident brought back bad memories of when he and others returned from Vietnam.

“When we came home, we weren’t very welcome,” Conaty said. “And we witnessed an awful lot of flag burning. One of the things we decided is, we are not going to let that happen to another generation of veterans. We were shocked when this occurred.”

A resolution was adopted by a vote of 6-4 Thursday by the legislative council of the campus’ Associated Students called for removing all flags from the lobby area of student government offices.

The resolution says, in part, “The American flag has been flown in instances of colonialism and imperialism.”

On Saturday, the Executive Cabinet of the student government — the ASUCI President and four vice presidents — vetoed the ban on the display of flags.

“We fundamentally disagree with the actions taken by ASUCI Legislative Council and their passage of (the ban) as counter to the ideals that allow us to operate as an autonomous student government organization with the freedoms of speech and expression associated with it,” the Cabinet said in a prepared statement.