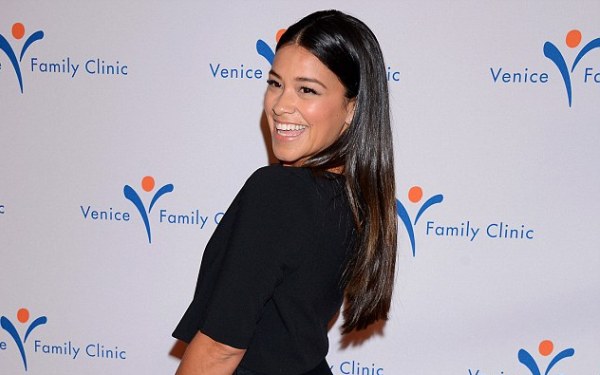 It was just six months ago that a dejected Gina Rodriguez was hanging all her hopes on an improbable show about a pregnant twentysomething virgin.

The 30-year-old actress had come off a rough year. A breakup had left her distraught, she’d moved out on her own, and a Fox pilot she’d booked, in which she’d been cast to play an aviator, had gotten scrapped on Christmas Eve 2013.

“It just felt like this really heavy downpour — as it does when you’re young, right?” she confided from the hair and makeup trailer on a Manhattan Beach soundstage just before the launch of the CW’s “Jane the Virgin” in the fall. “I just kept thinking, ‘I need a damn rainbow. When is my rainbow coming?’”

On paper, “Jane the Virgin” seems like a wacky thing to pin one’s hopes on. But as its lead, Rodriguez has emerged as one of the season’s breakout TV stars. Rodriguez, whose previous biggest credit was the lead in the Sundance hip-hop tale “Filly Brown,” has charmed critics and audiences with her ebullient, best friend-like manner on- and off-screen. The actress can go on tangents, talking about her craving for gluten-free pizza, or she might change undergarments in front of you (that is, if you’re a girl: “We have the same things. No biggie.”)

What’s more, the Chicago native, of Puerto Rican descent, has used that affable demeanor to draw attention to her frustrations and hopes as it relates to Latino representations in Hollywood — even using her time onstage during her recent Golden Globe win to speak on the subject.

In “Jane the Virgin,” based on a Venezuelan telenovela, Rodriguez stars as a twentysomething, second-generation American aspiring writer who is accidentally artificially inseminated during a routine OB-GYN exam. The show, which has been renewed for a second season, comes at a time when the nagging subject of diversity in Hollywood has come sharply into focus — whether in the film academy’s cold shoulder to minorities in this year’s Oscar nominations or in how prime-time television has scored hits and attention with the minority perspectives of “Empire,” “How to Get Away With Murder” and “Fresh Off the Boat.”

“We just felt there was an opportunity to do something that, despite its magical elements, felt real,” CW President Mark Pedowitz said by phone. “The family element to this story is crucial. But our way in is through Jane — and Gina has really made that character her own. What this show and what Gina has done for the network — we couldn’t be happier.”

A graduate of New York University’s Tisch drama school, Rodriguez has had stints on TV shows such as “Army Wives” and “Law & Order,” playing somewhat stereotypical parts such as pregnant teens or a juvenile delinquent. It’s partly what prompted her to turn down a role on Lifetime’s “Devious Maids.”

It’s a struggle Rodriguez has been vocal about — notably in an impromptu speech during the Television Critics Association press tour last summer.

“‘Jane’ just felt right for me,” she said later. “I didn’t feel like I was adding to the negativity that my community is often aligned with. We don’t talk about my ethnicity, we don’t talk about beauty. It’s implied that I have brown skin, it’s implied that I am beautiful the way I am. And I think that’s pretty damn cool and inspiring and needed.”

That’s not to say that the show ignores its Latin-ness. Developed for U.S. audiences by Jennie Snyder Urman (“Emily Owens M.D.”) and Ben Silverman (“Ugly Betty”), “Jane the Virgin” makes use of comical narration and telenovela-esque tropes — Jane’s biological father is a telenovela star (played by Jaime Camil). Jane’s maternal grandmother, Alba Villanueva (Ivonne Coll), speaks only Spanish and is a devout Catholic — upon first learning of Jane’s sex-free pregnancy, Alba thinks Jane is the next Virgin Mary. Jane’s mother, Xiomara (Andrea Navedo), has no inhibitions and is an aspiring singer who worships Mexican singer Paulina Rubio.

“Gina was the third person who auditioned for Jane,” Urman recalled by phone. “And I remember my first thought was, ‘Holy ...’ I mean, she made me cry when she did one of the scenes from the pilot. Everything rides on her on this show. And she knows that — you can see it in her face, you can hear it in the way she talks about what it all means to her.”

Although the Monday program has developed a small following by traditional, it has established itself as a darling among critics. Times critic Robert Lloyd called it “one of the best things to come out of the fall season,” while the Associated Press’ Frazier Moore wrote: “The wonder of this series is that it feels fully plausible, authentic and delightful, unfolding in a multicultural world with the irresistible Gina Rodriguez in the title role.”

It’s also the first CW show to rub elbows with some of television’s elite. The series, in a first for the 9-year-old network, broke through the awards circuit with Golden Globe nominations for the show and Rodriguez — reason enough to celebrate.

“If I’m going to have my little proud moment, it’s that this little Latin girl got the CW their first nomination, and then their first win,” Rodriguez said, taking moments to nosh on a bagel. “So if there was any point where that little ego comes in, it’s with that. I felt like it was a win for the whole Latino community. And obviously, I vocalize that a lot — because I mean it, and because it’s true, and because it’s real.”

Of course, being a role model is tricky terrain. Rodriguez brought up how someone — Viviana Hurtado of the Wise Latina Club blog — took issue with her Globes speech, in which she said that the award “represents a culture that wants to see themselves as heroes.” Hurtado, in her online piece, said that she “cringed” at the statement and that Rodriguez “missed an opportunity to educate viewers on the long string of vibrant (Latino) heroes.”

“I remember thinking, ‘Wow, what part of my heart did I ever get wrong?’” Rodriguez said, still troubled by the criticism. “She lists all these heroes — who rightfully should be named — but what I was trying to say is we need to see more Latino heroes on TV, because, like it or not, that helps shape perceptions.”

But then she quickly acknowledged that she had a tendency to be overly sensitive. “Life is good. I get to play this smart girl who is really discovering herself during a complicated time. She’s someone at odds with herself and her decisions — and I’m so lucky to get to have fun with that.”

The actress, who has a new beau (rainbow) and will next be seen in the big-screen film “Sticky Notes” opposite Ray Liotta (more rainbow), says her focus is just to keep it going.

“I had like an hour-long conversation with my parents after the Globes,” Rodriguez said, adjusting her prosthetic belly before rehearsal on the set. “My dad just kept saying, ‘Now you have to do really good work to prove that you deserve it. That we are deserving.’ What other motivation does a girl need?”