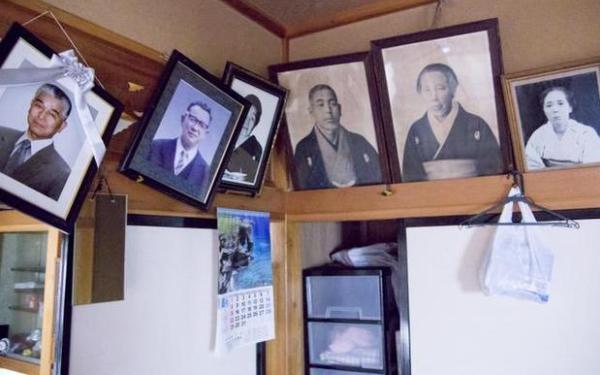 Generations of family photos are left behind by the residents that abandoned this home due to radiation evacuation orders in the town of Namie, Feb. 23, 2015.
(Credit: Albert Siegel - McClatchy)

NAMIE, Japan — The word for the number four sounds much like the word for death in Japanese. Now, four years after a magnitude 9.0 earthquake struck off the coast of Japan, causing a tsunami that devastated a large stretch of the Japanese seaside and triggered the worst nuclear disaster since Chernobyl, death is a fitting word to describe the fate of many coastal towns.

While some places have started to allow residents to move back in, others such as Namie in Fukushima prefecture have been designated as “difficult to return to” by the government. Located just more than five miles from the crippled Fukushima Daiichi Nuclear Power Plant, there’s little mystery about why.

Not only was the town virtually wiped from the map by the massive tsunami, but the ongoing crisis at the nuclear plant has made it a symbol of a disaster that just doesn’t end.

It was a normal Friday afternoon in Namie. The weekend was in sight for many people when suddenly, at 2:46 p.m. on March 11, 2011, a massive 9.0 earthquake struck off the coast. Lasting about five minutes, it was the fourth largest earthquake ever measured and the largest to hit Japan.

At first, the worst appeared to have passed when the shaking stopped. With 65 houses destroyed from the earthquake, the main concern was assessing damage. Few could imagine what was already on the way.

Then, 41 minutes after the shaking had stopped, the first wave of a massive tsunami that reached at times 45 feet in height swept in, destroying 586 homes. At least 182 people lay dead from the quake and tsunami; 33 people are still missing.

The cooling system stopped working at the Fukushima Daiichi Nuclear Power Plant about an hour later, at 4:36 p.m. The next morning, those who’d survived the quake and tsunami were told to flee Namie, as the government evacuated everyone within six miles of the failing nuclear facility.

To this day, no one has come back. The only people who can be seen in the town are decontamination workers. Buildings damaged by the earthquake remain untouched. Undamaged homes sit undisturbed, as if their owners will soon return. Wild pigs rule the ruptured roads. Bags filled with contaminated soil dot the town.

Namie’s registered population was 21,434 people in December. Of those, 3,800 still live in temporary housing, with another roughly 6,000 living in private housing provided by Fukushima prefecture. Rebuilding hardly seems worthwhile. In a recent survey, sent to 9,749 households of former Namie residents of which 59.5 percent responded, only 17.6 percent said they would return if given the chance.

“It’s hard to think about the future because the population cannot return right now, but of course I hope people will be able to go back,” said the town’s director of reconstruction planning, Katsumi Miyaguchi.

Still, he harbors hope that the town will rebuild. “Yes, we had a disaster, but we cannot just complain and be negative,” he said.

There seems little reason for optimism. With every passing day, the buildings that remain in Namie deteriorate, ravaged by wildlife and open to the elements. And many residents have moved on.

Nearly a third, 30.4 percent, of Namie’s residents have left Fukushima prefecture — doctors and teachers and other professionals whose absence discourage others from holding out hope for a return.

Ken Watanabe, 60, a retired supervisor at a chemical company, said the evacuation of the town reminded him of a science fiction film. It took him more than five hours to make a drive that normally took 20 minutes.

“On the way to evacuate, I happened to see a line of (military) cars, and the front sedan had people wearing white protection suits,” he said. “It was something weird and unusual.”

Since, he’s moved seven times. With a son in a university, he’d like to have a permanent home, but he doesn’t know if it will be in Namie. “To be honest, I don’t know yet,” he said when asked about his plans.

Takashi Kanazawa, 40, now works as a civil servant. Once a mechanic, he’s adapted and moved on. Leaving Namie was traumatic. Going back, with its memories of people now gone, is unthinkable.

“I’m not going back,” he said simply when asked. He said he and his wife appreciate now just having lives to lead. “I am satisfied and grateful that I can make my own living now,” he said.

(Siegel is a McClatchy special correspondent.)