Disneyland to close Innoventions hall; What next for Tomorrowland? 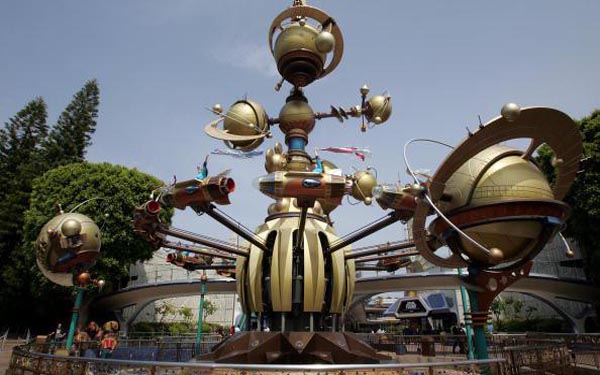 The Innoventions exhibit hall in Disneyland will close at the end of March, reigniting speculation among theme park fans about a much-rumored makeover of Tomorrowland.

Disneyland officials declined to discuss Monday what they have planned for the exhibit space, saying only that “we regularly make modifications and enhancements throughout the resort.”

But that did not stop Disney devotees and bloggers from speculating on the type of attractions that might replace the exhibit hall, now used to show futuristic technologies, such as robots and interactive computer games. The building also holds an exhibit of Marvel superheros.

With the celebration of Disneyland’s 60th anniversary starting in May, some Disney fans suggest the hall will be renovated to become a museum of theme park memorabilia.

But others point out that since Walt Disney Co. purchased Lucasfilm from “Star Wars” creator George Lucas in 2012, Tomorrowland was likely to undergo a “Star Wars” makeover.

“Have plans already been set in motion by Disney that will lead to the eventual release of the rumored Star Wars Land attraction we’ve been hearing about for quite some time now?” asked the JediNews website.

Some Disney fans say they have heard rumors that the food court in Tomorrowland will be overhauled to resemble the Mos Eisley Cantina from the 1977 movie “Star Wars: Episode IV — A New Hope.”

The ThemeParkInsider site was conducting a survey Monday, asking readers what they think should replace the Innoventions exhibit hall. Based on about 1,000 votes, a Marvel attraction was leading the poll (36 percent) over a Star Wars attraction (28 percent).

Other fans pointed out that “Tomorrowland,” a Disney science fiction film directed by Brad Bird, opens May 22. The renovation of the hall could be tied to the movie release, they suggest.

The circular building that houses the Innoventions exhibit opened in 1967 and was the home of the Carousel of Progress, an attraction of futuristic ideas that closed in 1973 and reopened in Orlando’s Magic Kingdom in Walt Disney World in 1976.

At the Anaheim, Calif., park, America Sings, an exhibit of animatronic animals telling the history of America through song, replaced the Carousel of Progress. America Sings closed in 1988, with Innoventions moving into the building in 1998 as part of a larger overhaul of Tomorrowland.