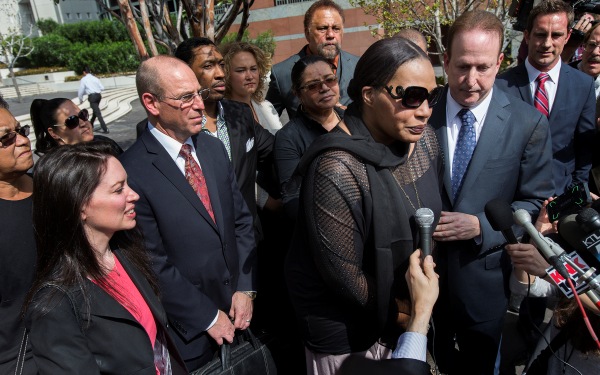 LOS ANGELES — So what effect will the “Blurred Lines” verdict have on the music industry?

That’s the question being asked after a federal jury in Los Angeles found Tuesday that the 2013 hit song “Blurred Lines” infringed on the Marvin Gaye chart-topper “Got to Give It Up,” awarding nearly $7.4 million to Gaye’s children.

The case focused on the similarities between the song and the legendary soul singer’s 1977 hit. Jurors found against singer-songwriters Pharrell Williams and Robin Thicke, but held harmless the record company and rapper T.I.

SO WHAT IS THE REACTION IN THE MUSIC INDUSTRY?

Los Angeles composer and producer Gregory Butler said Tuesday afternoon that his friends and colleagues in the industry were stunned by the verdict.

“You’ve made it illegal to reference previous material,” said Butler, also a managing director at music startup WholeWorldBand. “I’m never going to come up with something so radically different that it doesn’t contain references to something else.”

Joe Escalante, an early member of the Vandals punk rock band and an entertainment law attorney, said he was concerned that the jury’s decision had been driven by emotion rather than what’s protected under copyright law.

“This may put a smile on the Gaye family’s face, but it’s a dark day for creativity, and in the end, this will be a net loss for music fans,” he said. “Good news for lawyers and the bitter everywhere.”

Industry veteran Irving Azoff, who manages the Eagles and is chairman and chief executive of Azoff MSG Entertainment, said such disputes were normally resolved between music business insiders based on how many notes in a row were shared by two songs.

“It’s never been based on a jury’s opinion,” said Azoff, whose firm represents Williams on performance rights issues. “If we’re now entering into a gray area, that’s very scary.”

On the other hand, a veteran music industry executive said that protecting creative work was just as important to musicians, and that inspiration bordering on copying was becoming too common.

“Somebody should be protecting that,” said the executive, who asked not to be named because he might work with those involved in the case in the future. “If it has a chilling effect on copyright infringement, that should happen.... Stopping theft is what we’re talking about.”

WHAT WERE THE ARGUMENTS IN THE CASE?

The Gayes contended that they instantly recognized striking similarities between the two songs when they first heard “Blurred Lines.” They called to the stand a musicologist who analyzed the songs and concluded there was a “constellation” of eight similar elements. Others outside court had also noticed similarities.

An attorney for the Gaye children, Richard Busch, said there were copied elements — including the bass and keyboard line, the hook and a repeated theme — in all but two bars of “Blurred Lines.”

Busch also repeatedly pointed to statements made by the credited writers of the song — Thicke and Williams — referencing the late Motown legend in interviews about their writing process. Thicke said in several interviews that he suggested to Williams that they write something like “Got to Give It Up,” and Williams has said he was “trying to pretend” he was Gaye when he wrote it.

Thicke, Williams and their attorneys brushed off the statements as casual remarks designed to sell a song — and in Thicke’s case, made under the influence while he was drunk and high. Their attorneys asked jurors instead to believe what the musicians said on the witness stand: that Williams alone wrote the song with no input from Thicke, and that neither Gaye nor his song was discussed in the song’s creation.

Thicke, during his turn on the stand, played a medley of pop songs on a keyboard to demonstrate that many of them share the same chord progression and can sound similar. He painted a less-than-flattering portrait of himself, saying he’d lied repeatedly in interviews and in sworn legal documents, trying to claim credit for part of writing the song that had become the biggest hit of his career by far.

HOW BIG A HIT WAS ‘BLURRED LINES’?

It was 2013’s biggest hit. The song brought in $5.6 million for Thicke, $5.2 million for Williams and another $5 million to $6 million for the record company, as well as an additional $8 million in publishing revenue.