Blacks, other minorities at University of Oklahoma tell of isolation 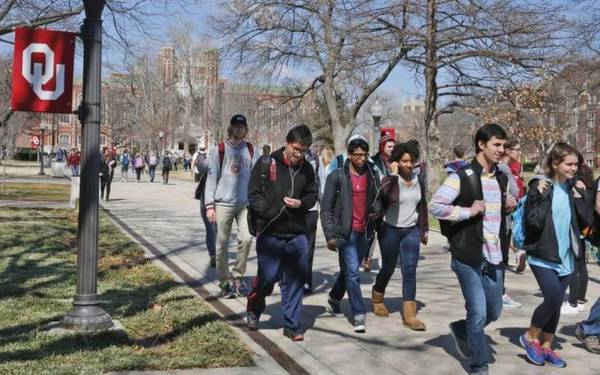 People walk on the Oval at the University of Oklahoma Tuesday, March 10, 2015. Two students have been expelled after an incident in which members of a fraternity were taped chanting a racial slur.
(Credit: Sue Ogrocki/AP)

NORMAN, Okla. — Naome Kadira walks with the practiced gait of a beauty pageant veteran, which she is, and speaks the language of the social justice activist — validation, micro-aggression, othering.

But the University of Oklahoma junior with the red streak in her hair wasn’t always so self-assured.

There were darker times, especially in her freshman year, Kadira said, when she never felt so different and so alone.

It’s part of the black experience at the university, Kadira said, a notion that you’re always outnumbered and out of place, forever identified by the color of your skin.

The release of two videos documenting Sigma Alpha Epsilon fraternity members singing a profane, racist chant rocked the Oklahoma campus this week. The university swiftly evicted the fraternity from its house and expelled two students accused of playing a “leading role” in the chant. Across the country people and organizations, including SAE’s national headquarters, expressed dismay and outrage.

But when Kadira saw the video, she said, she was upset, but not shocked. Neither were the black students she knows.

“It’s terrible, but it’s not surprising,” Kadira said. It’s not unusual for black students to encounter casual racism on campus, she said, “but it’s not outright racism usually.”

Kadira, 21, is a native of Galveston, Texas, and is proud to be a student at Oklahoma. She loves the campus and looks forward to grad school in her major, accounting. Would she recommend that black students attend OU? Yes, she said, if it helped them meet their educational goals.

“If you do, be ready to be alone,” Kadira said.

The people expressing the most surprise, she said, were white people. But that’s because they don’t see the trail of smaller acts of racism that make up so much of Kadira’s experiences in Norman, she said.

Every black person on campus knows another black student who left because of that isolation and the casual racism that grows in its place.

“People ask you, ‘Can you teach me to twerk?’ ” Kadira said.

Mirelsie Velazquez, a Latina professor in the university’s College of Education, came to Norman in August. She said she’s often the only person of color in classes or walking around town.

With the release of the video, Velazquez said she’s able to put faces and voices to the feeling she gets as a person of color standing in front of a room of white faces.

“As we stand there teaching, not just at Oklahoma, and then you think about how these students behave in private time, you wonder how do they view me and my community?” Velazquez said.

“It’s hard to enter spaces and now be constantly thinking about how you’re thought of.”

Velazquez came to Norman with her daughter, now a freshman at the university. Her daughter has yet to meet another Latino person in any class.

“She’s felt singled out a couple of times,” Velazquez said. “Her instructor asked her, ‘Do you have to translate things in your head before you speak?’ She’s barely bilingual.”

Velazquez said her daughter had learned how to handle insensitive or ignorant remarks.

“She has the language where she can defend herself,” Velazquez said. “What happens when they don’t have that kind of language?”

OU Unheard, the campus group that released the SAE video, compiled a list of grievances in a presentation to university President David Boren.

The issues are in line with Kadira’s and Velazquez’s experience. The letter demands the university hire more black teachers and better fund black campus organizations.

Most pointedly, it accuses the university of failing to retain black students.

OU Unheard also told Boren that black students feel left out of campus life and have to go elsewhere to get a college experience, including homecoming at other schools.

Ultimately, the grievances amount to individual experiences that are rooted in the paucity of people of color at the school.

There were 27,278 students on the campus in Norman at the beginning of the school year, 1,529 of them African-American. That’s less than 6 percent of the student population in a state that’s 11 percent black.

On Monday morning, a multiracial group of students, teachers and other staff members rallied on campus to denounce the video. Velazquez was among them.

Since Velazquez saw the video, she said, she’s had trouble sleeping. She was beginning to feel better after the Monday rally but then saw a another video, one of the fraternity’s white house mother, Beauton Gilbow, repeatedly using the N-word to sing along with a popular rap song, “All Gold Everything,” by Trinidad James, which repeatedly uses the word.

“I have friends of all races and do not tolerate any form of discrimination in my life,” Gilbow said in a statement to News9-TV. “I was singing along to a Trinidad song but completely understand how the video must appear in the context of the events that occurred this week.”

“Here’s another person who should know better,” Velazquez said.

At 4 p.m. Tuesday, she prepared for one of her last classes before spring break.