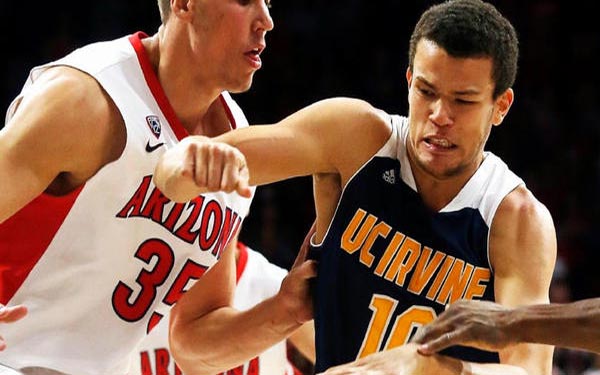 The republic of Macedonia is well off college basketball's beaten recruiting path.

But not too far for Ali Ton, a UC Irvine assistant coach.

Ton arrived in Skopje, Macedonia's capital, in 2011 and drove three hours to watch the European under-16 championships. There, in a B Division game, he recalls seeing "this skinny, long kid with a beautiful jump shot."

"That's a point guard," he told himself.

The boy's name was Luke Nelson, he was 15, and he played for England.

Four years later, Nelson is a sophomore guard in an Irvine basketball program that has competed for 37 seasons without ever making an NCAA tournament.

The Anteaters (18-12) open play in the Big West Conference tournament Thursday against UC Riverside at the Honda Center. Irvine, which finished second during the regular season, needs three consecutive wins to break what is the 11th-longest "tournament-less" span in the nation.

Last season, Irvine won the Big West's regular-season title but was upset in a semifinal of the conference tournament. The tournament champion is typically the only Big West team to advance to NCAA action.

If Irvine can break through, it will no doubt be due in part to its foreign legion. Nelson is among four contributors from overseas. Mamadou Ndiaye, a 7-foot-6 center from Senegal, Ioannis Dimakopoulos, a 7-2 center from Greece, and Haroldas Saprykinas, a guard from Lithuania, are the others.

"You look at mid-majors that have elevated their programs and many have done it, as we have, by recruiting international guys," Irvine Coach Russell Turner said.

Irvine's location — not far from the sand of Newport Beach — and academic reputation are lures on the international market.

"We look pretty good on the Internet," Turner said.

Ndiaye was easy to find. He came to the United States four years ago and played at Huntington Beach Brethren Christian High. Dimakopoulos and Saprykinas were located by Ton, whose father was a coach in Turkey. Both spent a year at U.S. prep schools.

"I have a lot of eyes in Europe," Ton said. "With my father's friends and my friends, I have built a small but strong network of people who I trust."

Nelson played a lot of soccer, but he stood out in England's basketball circuit.

He was named England's player of the year in his age group three times, including 2013 after he led the Reading Rockets to a championship in the English Basketball League Division I, the country's second-best league.

Ton made a swing through Europe in 2011 but barely got to the city of Strumica, Macedonia, in time to see Nelson. He had planned to attend the tournament in Skopje, on the other side of the country, but it was moved.

His network made it happen. "A friend of a friend picked me up at the airport and drove me three hours to Strumica," Ton said. "I watched two days of games."

Ton saw the right two days. Nelson had 27 points in a victory over Israel and 23 points in a loss to Slovenia.

Utah and Davidson came after Nelson later, and European pro teams also expressed interest. But Irvine and Ton were first.

Nelson has adjusted to life in Irvine and basketball at the major-college level.

"I never thought it was going to be easy, but I learned how tough it was going to be," said Nelson, who averaged 11.8 points to lead Irvine last season. "There are guys who play in England where it is more a recreational thing. Here, it's real serious."

Now he is ready for something even more serious.

"I came here with the NCAA tournament in mind," he said.