Gauging value of colleges' community service programs can be tough 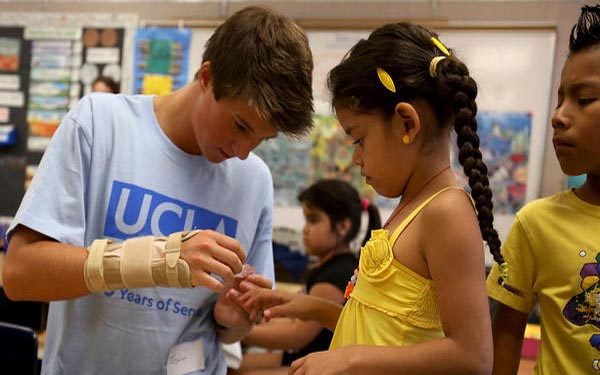 A UCLA student puts a band-aid on a second-grader during UCLA's annual Volunteer Day at Leo Politi Elementary School in the Pico-Union district in 2013.
(Credit: Luis Sinco / Los Angeles Times)

In all, nearly 10,000 students performed the equivalent of 180,000 hours of community service last year.

The campus recently won the highest federal accolade in civic engagement, the Presidential Award in the 2014 President's Higher Education Community Service Honor Roll, one of only four universities nationwide to receive the top honor.

Providing opportunities for students to contribute to the public good has become an important part of the mission of the vast majority of the nation's colleges and universities. Campuses incorporate community service into their strategic plans and reward faculty for designing courses that involve students in such activities.

There has been less attention, however, to how colleges define and measure community service, whether such programs say anything about how schools prepare students and whether communities actually benefit.

"There's a lot of rhetoric used in marketing how well colleges are interacting with the community, but when you look at the nitty gritty on the ground, it's a different story," said Dan Butin, dean of the School of Education and Social Policy at Merrimack College in Massachusetts.

Butin, who is also the executive director of the Center for Engaged Democracy there, said that incorporating community service into classroom instruction usually benefits students. But many programs are not structured to include input from community partners about their actual needs.

"All too often it becomes just about hours," Butin said. "Some community partners say it actually involves more work to handle all of the student volunteers. There are a lot of very well-meaning folks but it's hard to find good examples."

More colleges are competing for awards and recognition, such as the presidential honor roll.

And an increasing number of "best college" rankings, such as those produced by the Washington Monthly, are using civic engagement as a benchmark, rather than acceptance rates, reputation and other traditional measures that tend to favor elite institutions.

Most University of California campuses and state community colleges have centers devoted to community service, as do all 23 Cal State campuses.

Nationally, about 3.1 million college students participate annually in community service projects — through classroom-related activities or outside volunteering, according to the federal Corporation for National and Community Service, which oversees the presidential honor roll.

That work translates into about $2.5 billion in economic value. And college students are more likely to volunteer (26%) than non-college students (14%) in the same age group.

But has community service become just another box that institutions check off as they seek to upgrade their reputations?

Paul Glastris, editor in chief of the Washington Monthly, argues that a new debate has emerged about the role of higher education as magazines like his focus on alternative ways to judge an institution's caliber — such as recruiting and graduating low-income students, developing innovative research, increasing the number of doctoral recipients and encouraging students to give back.

Studies find that service learning helps motivate students to stay in class and develops critical thinking and problem solving skills. Conclusions are mixed, though, on whether it affects moral character or grades.

A small study of student volunteers at the Dominguez Hills campus found that grades dropped slightly — but also that 97% stayed in school, said Cheryl McKnight, director of the Center for Service Learning, Internships and Civic Engagement.

Cal State, where about 65,000 students each year participate in community service, is undertaking a three-year pilot project to study the effect of service learning on students studying science, technology, engineering and math using a control group to compare graduation rates and long-term effects.

"We forget that college students' minds are still shaping and developing and for some students it may have a profound effect right away, while for others it may take time to make those positive connections," said Judy Botelho, director of the systemwide Center for Community Engagement.

Many institutions are doing more to improve practices and to integrate community service into the curriculum.

UCLA, for example, offers a minor in civic engagement as well as internships and a research scholarship program, said Doug Barrera, assistant director of the Center for Community Learning.

Currently, students are working with a number of nonprofits, including conducting research on a food pantry and designing and carrying out a medical survey for a Pacoima social services agency.

The projects have helped junior Lidia Orozco academically and socially, said the 23-year-old who is majoring in Spanish community and culture with a minor in civic engagement.

'I've been involved in community service since high school," Orozco said, "and it's definitely helped me to figure out my own path."