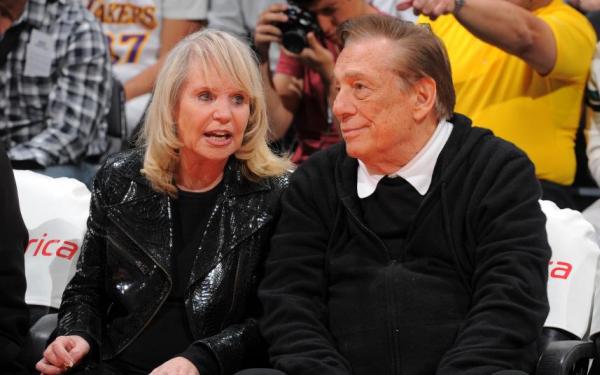 Donald Sterling has added his wife, Rochelle, and two doctors as defendants in his federal lawsuit against the NBA over the forced sale of the Clippers, alleging that they were part of a wide-ranging conspiracy to remove him as the team’s owner.

The amended complaint filed last week in U.S. District Court in Los Angeles accuses Rochelle Sterling of “secretly” working with the NBA and Commissioner Adam Silver to sell the Clippers to Steve Ballmer for a record $2 billion.

“Additionally, the NBA and Silver isolated Rochelle from her husband and scared her into undertaking certain conduct hereinafter alleged, including the signing of papers ... that she did not understand,” the 32-page complaint said. “All of this conduct constituted elder abuse.”

Silver, who banned Sterling from the NBA for life and fined him $2.5 million in response to inflammatory comments he made about African Americans in a recorded conversation, is also named as a defendant in the lawsuit.

Stephen Smith, one of Rochelle Sterling's attorneys, called the filing "desperate and frivolous."

Dr. Meril Platzer and Dr. James Spar, who found Donald Sterling mentally incapable of continuing as a member of the family trust that owned the Clippers, are also named in the amended complaint.

The lawsuit said Rochelle Sterling “fraudulently induced” and “fraudulently arranged” for her husband to be examined by the doctors last May and accuses them of violating the Health Insurance Portability and Accountability Act by disclosing the former owner’s medical records.

Because of this, the lawsuit said, Donald Sterling “suffered extreme mental distress ... including worry, anxiety, anger, embarrassment, sleeplessness and fatigue.”

Sterling sued the NBA last May, days after his wife agreed to sell the Clippers to Ballmer. The amended lawsuit seeks at least $600 million plus unspecified punitive damages for 12 counts that include antitrust violations and unfair business practices.

“[The defendants] colluded and worked toward a common goal in causing injury to Sterling’s financial interests,” the complaint said.

The NBA countersued Sterling last August, saying that Rochelle Sterling indemnified the league against any litigation by her husband, meaning, in essence, that the former owner would be suing himself.

Almost seven months after the Clippers' sale closed, $1 billion of the sale proceeds remain in an escrow account under NBA control, according to Bobby Samini, Donald Sterling's attorney.

The arrangement is detailed in an addendum to Rochelle Sterling's settlement agreement with the NBA. The money in escrow, the document said, will "serve as a source of recovery for any indemnity payments due" to the NBA. It's unclear when the money would be released.

Sterling is also appealing last July’s sweeping ruling in Los Angeles County Superior Court that allowed the Clippers’ sale to proceed. An unusual order issued by the judge in that case prevents Sterling from overturning the sale on appeal; the best he can hope for is to collect damages.

In the amended complaint, Sterling said he could have sold the Clippers for more than $2 billion but that the circumstances of the sale “markedly reduced the price” for the franchise. The complaint called the NBA’s role in the sale “unjustified, unsubstantiated, illegal and coercive.”

"This is now just about fighting over money," said Michael McCann, a sports law professor at the University of New Hampshire. "It's going to be extremely difficult to show any conspiracy between Shelly Sterling, the doctors and the NBA."

Sterling also took aim at V. Stiviano, whose recording of the then-Clippers owner making the inflammatory comments about African Americans became public last April. The complaint described her as a “former friend” and questioned the veracity of the recordings that ended Sterling’s 33-year ownership of the Clippers.

“Several of the statements on the recording were not made by Sterling,” the complaint said. “The statements alleged to be those of Sterling were apparently altered by Stiviano or her agents.”

The complaint didn’t offer evidence of the alleged alteration or identify which statements were in question.