R marks the spot at South by Southwest Film Festival 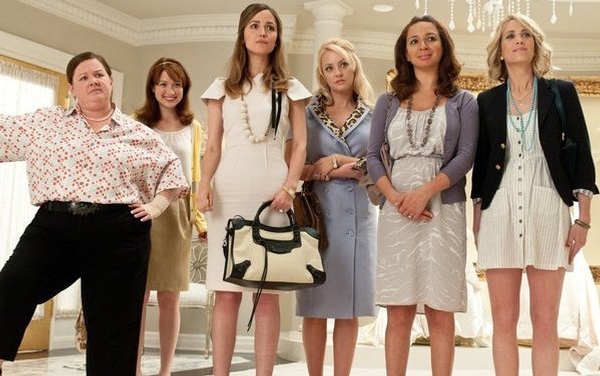 Bridesmaids is just one of the many R-rated comedies that premiered at SXSW recently.
(Credit: Universal Pictures)

The formalities of the prestige festival circuit do not apply at the South by Southwest Film Conference and Festival — a tuxedo or gown would likely end up stained with barbecue sauce or splashed with beer.

Rather, the event better known as SXSW has staked out its own distinct territory by spotlighting commercial comedies — often of the raunchy R-rated variety — that are vital to the movie business but rarely show up at festivals such as Sundance, Toronto or Cannes.

“On some of my films, we’ve said, ‘Should we show this at Cannes? Oh, I don’t think they’ll get it at Cannes,’” said comedy powerhouse Judd Apatow, who is screening a work-in-progress of his upcoming “Trainwreck,” written by and starring Amy Schumer, at this year’s festival. “But at South by Southwest, I feel like people really enjoy the type of movies we make.”

The Austin, Texas-based SXSW creates a mutually beneficial atmosphere — comic films that often don’t get much respect get a prestige polish and the festival gets a kick of star-power and audience-friendly fun. The crowds at SXSW are often friendlier than the ones at higher-brow film festivals, so these kinds of mainstream movies can get a quick boost before they roll out later in the year.

Oscar-aspiring movies? Don’t look for them here. But if outrageous, foul-mouthed comedy is your thing, you’ve come to the right place.

Raucous, R-rated comedies have long found a home at SXSW: The festival was a successful launching pad for “Knocked Up,” “21 Jump Street,” “Bridesmaids” and “Neighbors,” all going on to gross well over $100 million domestically. This year the festival is going for laughs in a big way with the premieres of three studio comedies — “Trainwreck,” Paul Feig’s “Spy” and Etan Cohen’s “Get Hard.”

The films will bring to the festival such high-profile talent as Schumer, Bill Hader, Melissa McCarthy, Rose Byrne, Will Ferrell and Kevin Hart. Other comedians are popping up around the festival too: Jimmy Kimmel is taping his late-night talk show in Austin for the week, performers from the Upright Citizens Brigade are doing improv gigs and a documentary about Russell Brand’s recent turn to social activism is screening opening night on Friday.

The film fest is in its 22nd year, and Austin — home to University of Texas, a vibrant tech industry and long-standing ethos to “Keep Austin Weird” — gives it a particular laid-back vibe, as does the concurrent interactive conference and music festival.

The festival overtakes multiple venues mainly around the city’s downtown, with a friendly bustle as attendees roam the streets from event to event. One of the central venues is the 1,100-seat Paramount Theatre, which can take on an especially rowdy, roof-raising atmosphere.

Unlike at Cannes — where crowds are known to boo when they dislike a film — SXSW attendees are generous with their laughter and applause. SXSW attendees can be generous to a fault; films such as “Observe and Report” and “MacGruber” bombed at the box office after being warmly received in Austin.

“In Austin, the audience is predisposed to laughing,” said Matt Labov, a publicist whose clients include Apatow, Seth Rogen and Sacha Baron Cohen. “Sundance is agents and buyers and press, but South by Southwest is basically comprised of fans. It’s the market you’re trying to reach — 20-ish, mobile, new media. There’s a cool vibe. It feels like a carnival.”

There’s also the sense that the next big thing could be grabbing a taco at the same joint as you. Take Lena Dunham, in many ways the festival’s signature star. Her short feature “Creative Nonfiction” screened at the festival in 2009, and then her breakthrough “Tiny Furniture” won the grand jury prize in 2010. So when she landed her own HBO show, she premiered “Girls” at SXSW in 2012.

In fact, the Sunday night lineup on HBO of “Girls,” “Togetherness” and “Looking” all feature SXSW film fest alumni.

But the rising tide of attention does not necessarily lift all boats. Last year’s grand jury winner, the New York-set comedy “Fort Tilden,” struggled to make any impression after the festival. True independent films at this year’s festival, even with enviable casts, like Jason Schwartzman in “7 Chinese Brothers” or Natasha Lyonne and Judy Greer in “Fresno,” could be left fighting for the media’s time and attention against studio-backed marketing efforts.

“Sometimes I feel guilty taking a commercial movie to a film festival,” acknowledged Feig, who made his feature directing debut with the small 2003 drama “I Am David” before directing “Bridesmaids” and “The Heat.” “The reason film festivals exists is to give a shot to movies that are more challenging or might not get distribution — that won’t necessarily out of the gate get looked at as commercial.”

Which puts the festival into something of a constant balancing act between the less obvious films that benefit from discovery and the starrier selections that attract the media to Austin in the first place.

The mainstream films screened at the festival are still specifically curated. The comedies shown at SXSW may be a bit rude, but they’re not dumb.

Comedies, like the allegorical aspects of sci-fi films, can unexpectedly sneak in a larger message that audiences may not expect. “Get Hard,” for example, in its story of a pampered upper-class man (Will Ferrell) who prepares for upcoming jail time with the help of an African-American man (Kevin Hart) he obliviously assumes had been to prison, touches on larger social issues of race and class.

“I want people to have a good time, but if just some of the audience has an interesting, difficult conversation on the way home, that’s really my Grail,” noted director Etan Cohen. “We did take on some of those big issues, and in a comedy we’re trying to give people some sugar to make the medicine go down. We tried to sneak in as much as we could.”

He noted that the film had test screenings around the time of events in Ferguson, Mo., last summer, and it was remarkable to see tense audiences find relief in the film. “In a way you can reach a much bigger audience than if you made a very serious movie about race and income inequality. And that’s kind of the privilege of comedy.”

Of course, not all of the fest’s high-profile flicks are of serious moral consequence. But they still go on to do serious business — the importance of which filmmakers like Feig don’t think should be underestimated.

“At other film festivals you get these serious movies — art movies — which are great,” said the director, whose new movie features McCarthy as a meek desk jockey thrown into the field as a secret agent.

“But it becomes this thing of ‘these are the real movies, so we can’t have these stupid comedies.’ And I think since SXSW is also about music and technology and live performance, that carries over into the screenings of the movies,” he said. “There’s a love for crowd-pleasing movies.”

Special Features
This L.A. activist went to jail. Now she runs a film fest that puts justice on trial
315 views

Special Features
‘There’s going to be no rules’: Hollywood tests new ways of releasing movies in a pandemic
748 views

Special Features
Digital theater is all the rage, but could it destroy the live stage?
922 views
bid=||