It Follows, the stuff nightmares are made of 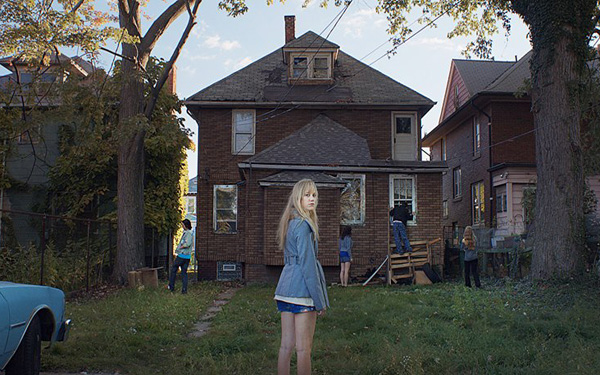 Maika Monroe stars as Jay in It Follows.
(Credit: RADiUS)

Before he was directing films, a young David Robert Mitchell (The Myth of the American Sleepover, 2010) was haunted by nightmares—nightmares filled with people silently and methodically following him no matter where he hid. There were no words exchanged and no sense of urgency, but the suffocating sensation and anxiety affected Mitchell long after he had awoken. Proving he was a true storyteller even at a young age, Mitchell catalogued that feeling, keeping it in storage until the moment he could make it come to life.

Mitchell recalls, “It was very disturbing. Sometimes when something bothers you that much, when you wake up and are thinking about it, it’s hard to shake that... Even when I was a kid, and I had these nightmares I probably thought, ‘Oh, how could I use that?’ Not to say that I really wanted to make a movie at that moment, but it wasn’t long after.”

That brings us to It Follows, a tale of horror that follows a teenage girl named Jay (Maika Monroe, The Guest) who gets the short end of the stick when she sleeps with an older guy, only to find out afterwards that he just passed her something worse than an STD: a demon. This sinister beast takes the shape of anyone—a stranger or a friend—and will eternally follow her until it consumes her.

Seeing as this demon thing walks in no great hurry, maybe this won’t be too hard for Jay to avoid. But no one else can see it and the only way to get rid of it is to sleep with someone else, making things a little stickier. Luckily she has a team of friends that will do everything in their power to help Jay fight for her sanity and safety, and maybe even find a new home for the follower.

Where most horror movies focus on the upfront and out loud scare factor, It Follows embraces the quiet drama and buzzing restlessness that comes with waiting for your demons to catch up to you. With this, Mitchell thrived in creating something primitively nail-biting.

“What was interesting to me about a horror film—about this horror film is maybe not what would be interesting to everyone else. I think it could very easily be just about the moments of attack, but I was maybe even more interested in the anxiety that is created in the waiting moments, in the spaces in between when its just these friends having to communicate with one another,” Mitchell explains. “All the feelings that they have for each other don’t go away just because of this nightmare. To me that was what the movie was really about, and the other stuff was the necessary element to make sure that they felt that kind of anxiety.”

Aiming to match the visuals with the languid stride of the story, Mitchell worked closely with his cinematographer Mike Gioulakis (John Dies at the End, 2012) to create an immersive world where the viewer is pulled in to this group of friends looking out for the encroaching demons.

Heavy on the wide-angle shots and long takes, Mitchell and Gioulakis show us everything without pointing at anything. We are left to search for signs of evil at hand, making us accountable for our own fears. Pair that kind of responsibility with the inebriating electronic score by Disasterpeace, known for composing music for video games, and the result is a sound aimed to riddle nerves and encourage self-doubt.

Explaining his methodology, Mitchell said, “I wanted a score that did what the film was trying to do, which is to move between or suggest something beautiful and also something terrible—something that’s disturbing and that provokes anxiety, and I think that’s what it does. He moves between these very beautiful melodies and then the controlled noise, and on some level it’s about assaulting the audience, you know, and we do that.”

Yes, It Follows does do that, and unapologetically so. By pulling us in various directions of comfort and disquiet, Mitchell and his crew go beyond the typical pop-out scares of the horror genre to create an immersive environment of uncertainty. And there's nothing scarier than getting caught up in the horror story, awakening a dream to reality, a nightmare to real life.

Click here to enter to win a RADiUS Blu-ray pack, an autographed It Follows poster and a gift certificate to Meltdown Comics.