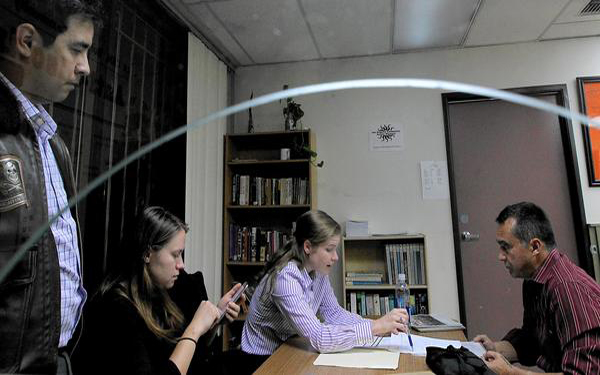 Pegues, they learned, is locked in a dispute with her landlord, who she says is attempting to evict her.

She was lost in a sea of legal paperwork with no money for an attorney and fearful of ending up back in a homeless shelter.

So nearly every Wednesday, Pegues has been riding the bus from her home in the Baldwin Village area of South L.A. to a free legal clinic in skid row. There, a staff of attorneys and law student volunteers provides free legal advice once a week to anyone who seeks it.

"It's a traumatic, mind-boggling experience trying to get out of this situation when everything is closing in on me," Pegues said. "If I have a problem, they don't look down on me here. They just step up and help."

The State Bar of California is hoping to get more help to people like Pegues by requiring that law students complete 50 hours of legal work for free or substantially reduced rates within one year of obtaining their license to practice law.

The proposal is designed to create an army of thousands of young lawyers to assist the growing number of California residents who need legal advice but cannot afford an attorney.

During the economic downturn that began in 2007, funding to provide legal help for the poor plummeted just as more people were falling into poverty and needed help with foreclosures, evictions and other serious problems. Legal aid organizations were more selective in how they doled out assistance. The state bar estimates that more than 1 million Californians seeking legal help are turned away each year.

Supporters of the 50-hour requirement say they hope it will help prospective attorneys gain experience that will make them better lawyers and give them an appreciation for the importance of providing legal help to low-income residents.

The proposal mirrors one recently adopted in New York, and advocates say its approval could lead other states to follow suit.

But some who work in the legal aid sector fear that organizations don't have the resources necessary to absorb the rush of students that would follow if the proposal becomes law.

They point to a lack of attorneys who can help the law students, who are prohibited from handling a case in court or offering legal advice without supervision by a licensed attorney. Many organizations say they lack the staff to properly train or supervise large numbers of students as well as the space for them to work.

"The need is endless," said Kirsten Kreymann, pro bono director at Public Law Center in Santa Ana. "We want to provide as much high-level legal service for our community as we possibly can — but we need the money to do it."

Unlike in criminal court, people in civil cases do not have a constitutional right to an attorney, forcing some who cannot afford representation to fend for themselves in important legal matters, such as fighting evictions, seeking restraining orders and dealing with guardianships.

The Legal Aid Foundation of Los Angeles, one of the largest of about 100 legal aid organizations in the state, accepts only about 10% of law students who apply to volunteer because it is unable to accommodate more, said Phong Wong, the organization's pro bono director.

"The need is definitely there. We turn away so many low-income clients because we don't have the support, the resources to help them," Wong said. "At the same time, there are all these law students who can be put to use. We just need to figure out how to make it work for the clients that we serve."

A key funding source for legal aid organizations in the state comes from interest earned on money temporarily held by attorneys for their clients in trust accounts. But as interest rates plunged during the economic slowdown, so too has the money earned from those accounts. It dropped nearly 80%, from $22.8 million in 2008 to $5.2 million in 2014.

Other sources of funding, including government grants, contracts and private donations, also fell.

Many organizations reduced costs by cutting staff and requiring furloughs. Caseloads were cut despite growing demand, according to legal aid groups.

"There has always been a justice gap, and it's not getting any better," said Salena Copeland, executive director of Legal Aid Assn. of California.

In 2012, the state bar formed a task force to examine ways to better prepare lawyers for a successful transition into the profession

Driving the agenda were concerns that law school students needed more hands-on experience in an era of economic belt-tightening. Many large law firms and government agencies spend less money on training new legal recruits, and more than half of newly admitted lawyers work for small practices that lack the resources to provide much training.

Providing free legal work to those who can't afford attorneys would give young lawyers the experience they need while also addressing a major gap in services to the poor, the task force decided.

The 50-hour requirement was one of several recommendations, which must still be approved by the California Supreme Court and state Legislature.

Southwestern Law School professor Laura Dym Cohen, a member of the task force, said she hopes that law schools, legal aid organizations and law firms will collaborate for students to do the work, perhaps sharing the costs.

"I would anticipate that the state bar and all of those who are involved will come together to make this a workable model for all," she said.

The requirement in New York was the brainchild of Jonathan Lippman, chief judge of the New York Court of Appeals. The rule requires lawyers to complete the 50 hours before receiving their license.

Lippman said he heard the same concerns that have been raised in California. Some argued it would be a financial burden for new attorneys as they face a difficult job market. Others feared it was a first step to mandatory pro bono work for all practicing attorneys.

"When I first put it out there, it made people nervous — the different constituencies, the law schools, the bar, the students. Everyone had some reason to sort of say, 'Gee, we don't want to be forced to do this,'" he said.

Legal aid organizations in New York feared they would not be able to handle the influx of students looking to volunteer, but the requirement has been a success, he said.

Attorneys at the clinic represented skid row residents when police stepped up ticketing in the area for minor offenses such as jaywalking, loitering and littering. It has since focused on housing issues, such as wrongful evictions and discrimination.

On a recent evening, Dan Glaser, 25, a second-year UCLA law student, left a class early to make the hour-long journey in rush hour to the clinic.

He has volunteered at the skid row and other clinics, clocking about 25 hours in less than two years. He said 50 hours wouldn't be much of a burden to him. Law students like himself, he said, can be a bit isolated from the world around them, so he decided to seek out a way to help the people who needed it most.

But he worries about the implementation of the proposed 50-hour rule and the added costs universities and legal aid foundations may face. To force law students into this type of work may turn them off it altogether, he said.

"The students that want to do this type of work have plenty of opportunities to do it," he said. "I'm not sure what can be gained by forcing them to do it if they don't have an interest."

That night, more than a dozen people sought help at the clinic. Students spent at least half an hour assisting each client. Pairs of law students debriefed each client, zeroing in on their legal problem and consulting with supervising attorneys on what steps to take.

Karl Scott, a longtime volunteer and staff member of the Los Angeles Community Action Network, said some nights the clinic closes its doors early when it doesn't have enough lawyers and volunteers.

But on this day, a good showing of law students and attorneys had the clinic running smoothly.

"We'll stay open until the last person leaves," he said.