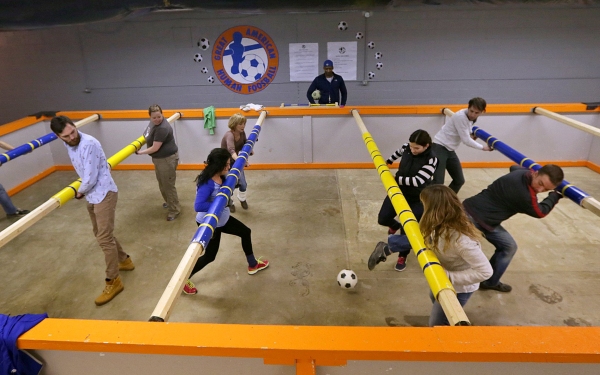 Human foosball has nearly all the components of its rec room inspiration: a fast-moving ball caroming off walls, players sliding side to side to block and kick, goalies ready to fire the ball down field.

The only missing element? The pre-kick flip.

Even without the head-over-heels spinning, though, the players in this anthropomorphized game engage in plenty of acrobatic, breath-stealing twists and turns.

On a recent Saturday inside a former retail space in the Tower Grove South neighborhood, 12 players huddle next to the 16-by-32-foot court. Six of the Great American Human Foosball competitors are donning black; six sport red. They duck through an opening in the 3-foot-high wall before sliding the goal back in place behind them.

The players, men and women in their 20s through their 40s, take their places along one of six beams that bisect the court, like the rods on a foosball table. A goalie stands at each end facing a line of two strikers from the opposing team who stand back to back with three midfielders facing off at the center.

The beams are about four feet apart, just enough room to make it difficult to steal the ball from the person facing you, but close enough that you can partly rotate and swipe at the people at your back.

Along the beams is PVC pipe with handles attached. Each line slides as one unit, just like in foosball.

“It’s a lot of lateral motion,” said Clayton Delaney, 40, who is officiating the match. “It’s like dancing, a lot of footwork. You have to have coordination with your teammates.

“The funny thing,” said Delaney, a fitness instructor and P.E. teacher, “is before you know it, you’re getting a real workout.”

He takes his place outside the court.

The players stand motionless, eyes fixed on him as they wait for the youth-size foam soccer ball to be dropped.

Almost immediately, the black team gets off a quick shot and scores before red has time to react. Soon, though, both squads find their rhythm as the ball bounces between the walls, beams and players.

The black team’s goalie, Matt Stelzer, nods to his defensive line to slide right. He does a foot fake and snaps the neon yellow ball off the left wall.

“I wasn’t sure what to expect from the game,” Stelzer, 45, said. The former college soccer player compares human foosball to small-sided soccer games, where a few players compete on a shrunken-down field.

“The hardest part was remembering to slide,” he said. “The first four or five minutes, I wasn’t doing it.”

The players also have to twist and turn to track the ball, swinging their legs back to scrap with the opponents behind them. The ball pings around so quickly, the dance — two steps to the left, one to the right — rarely stops.

Through it all, everyone’s hands keep a tight grip on the beam.

Until a well-placed shot sends arms flying up in celebration.

“Red team’s back in the game,” Delaney announces as he glides a bead across the abacus-like scoring system. “We’re low-tech,” he adds.

“It’s a good workout,” said Chris Foster, 25, catching his breath after the first 15-minute half. “It’s lots of side-to-side motion, and fast-moving because it’s a little box.”

Ed Brown, 65, built the “box” — plywood painted light gray with orange trim — over the course of a few weekends. Brown, who owns a shed building business in Farmington, came across human foosball on the Internet.

“I thought it looked like fun,” he said. “And it’s no leap to jump into manufacturing foosball tables.” He mentioned the game to his daughter, Sherri Brown.

“I knew he could build it, I could manage it, and Clayton could facilitate it,” Sherri Brown, 39, says about the genesis of Great American Human Foosball. She bought the building on Morganford Road in the fall, and friends spruced it up with some soccer-themed murals.

Part of Sherri Brown’s interest in the game stemmed from her and Delaney’s 10-year-old daughter, Ayla.

Family recreation opportunities are difficult to find in the city, Brown says. As long as children are tall enough to clear the beams (about 40 inches), they can play with adults. Men and women can play together.

As the second half of Saturday’s game starts, a slightly nervous Kathleen Branson subs in for the black team. Branson, 44, works out regularly, but “it’s always good to have different stuff to do,” she said.

Several rounds of ricocheting balls later, Branson gets off a shot from midfield that flies by the red defensive line. It is, in fact, the winning goal.

The glory is sweet. “It was awesome,” she said. “It takes a little getting used to, but it was easier than I expected.”