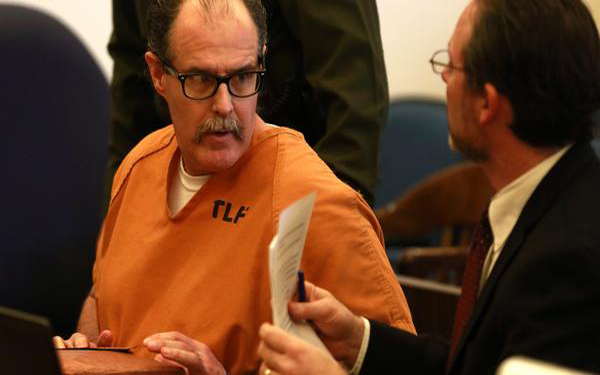 Soon after Scott Dekraai murdered his ex-wife and seven others at a beauty salon in Seal Beach, Calif., the former tugboat crewman found himself in a jail cell next to the last inmate his attorneys would have wanted in his proximity.

This was a man prosecutors called Inmate F, and around him, defendants seemed to incriminate themselves. Now he was in earshot of Orange County’s most prolific mass shooter.

Exactly what 42-year-old Dekraai told him about his crimes, amid 132 hours of surreptitious jailhouse recordings, has never been made public. But prosecutors hoped to use it to put Dekraai on death row for the 2011 murders at Salon Meritage.

Inmate F, defense attorneys learned when a judge ordered his background revealed, was a former Mexican Mafia leader facing a life sentence. He was also a longtime informer with strong incentive to help the law. But Dekraai had lawyered up and the law forbade cops or informants from milking him for information.

For two years, assistant public defender Scott Sanders has been trying to prove that is a lie.

Sanders has argued that Orange County jailers have routinely flouted defendants’ rights with an illegal jailhouse-snitch operation, and that prosecutors have repeatedly covered it up.

On Thursday, Orange County Superior Court Judge Thomas Goethals will weigh that claim, and decide whether the government’s mishandling of the case warrants the dramatic steps Sanders is requesting: dismissing the death penalty, and booting the district attorney’s office from the case.

The judge refused to do that in August, when he ruled — after months of contentious hearings — that the mistakes were “negligent rather than malicious.”

Now, as a second round of snitch-related hearings draws to a close, new evidence is before him: a trove of documents revealing the existence of secret jail logs that show jailers’ notes about Dekraai.

Dekraai’s attorney argues that the records — and the fact that a host of law-enforcement witnesses somehow neglected to mention them during hours of questioning last year — highlight what he has said all along: Jailers orchestrated Dekraai’s movements from the start and then refused to come clean about it.

Since Dekraai has pleaded guilty, one of two legal fates awaits him: Life in prison, or death row. In its zeal to win a death sentence against Dekraai in an expected jury trial, Sanders wrote in a recent motion, “the government spent years hiding and lying about evidence that undermined their version of events.”

Sanders contends that his effort to unravel the informant program has cost him years of work he could have spent building Dekraai’s defense, and that Orange County prosecutors can’t be trusted to play fair.

The district attorney’s office acknowledges that the secret jail logs were turned over to the defense “tardily” but said it doesn’t affect Dekraai’s ability to get a fair trial, particularly since Dekraai’s recorded jailhouse remarks will never be heard by jurors.

“We don’t feel that what has happened over at the jail has any bearing on his ability to receive a fair penalty phase,” prosecutor Howard Gundy said.

The district attorney’s office said that jail personnel, including a nurse, moved Dekraai into a convenient and visible cell in a ward for medical observation, and that it was only coincidentally next to Inmate F, the “prolific and inveterate informer” whose real name is Fernando Perez.

“No one involved in placing defendant and Perez in adjacent cells had any inkling that Perez had been a government informant,” prosecutors wrote in court papers.

At last year’s hearing, jailers in the sheriff’s Special Handling Unit — which works with informants — distanced themselves from the decision to put Dekraai in that cell. “In a medical ward like that we pretty much don’t have any say,” said Sheriff’s Deputy Ben Garcia.

At the recent hearing, Sanders sought to undermine that claim with a note from Dekraai’s secret jail log, written when the surreptitious recordings were underway. In it, a jailer wrote that Dekraai was “not to be moved regardless of medical or mental health request.” This showed jailers were in control all along, Sanders said.

During the hearings, another jailer, Seth Tunstall, downplayed his role in dealing with informants. Sanders confronted him with an affidavit Tunstall had written, in another case, in which he listed one of his duties as “developing confidential informants.”

“I guess I put the wrong word in there,” said Tunstall, a veteran jailer with a doctorate in psychology who brought his own lawyer to court to advise him. “I did not mean ‘develop.’”

In reality, Tunstall said, he had “supervised the passing of information” from jailhouse snitches to other agencies.

When he ruled on the case in August, Goethals said he thought jailers had not placed Dekraai next to Perez with the specific plan of eliciting incriminating remarks. Instead, the jail placement resulted from “a confluence of independent events.”

But in the same ruling, the judge harshly criticized prosecutors and deputies who had appeared as witnesses before him, saying some were “credibility challenged” and had “undoubtedly lied,” though he did not name names.

Relevant now is whether the latest hearings have deepened Goethals’ doubts about their credibility. The judge offered a possible glimpse of his thinking when he asked lawyers to weigh in on what he called his “analytical dilemma.”

What would be the proper sanction in the Dekraai case, he asked, if — in what he called a “worst-case scenario” — he found that law-enforcement witnesses had perjured themselves?

Sanders’ effort to defend Dekraai and another client, Daniel Patrick Wozniak, an actor accused of murdering two Orange Coast College students in 2010, has unearthed evidence of jailhouse-informant tactics that has already undermined other serious cases.

Leonel Vega was serving life in prison without the possibility of parole for a 2004 gangland slaying in Santa Ana.

At the Dekraai hearings, Vega’s lawyer, Todd Melnik, learned that Orange County prosecutors had won the conviction with the help of a paid jailhouse informant, Oscar Moriel, whose background had not been released to the defense before trial.

Prosecutors agreed in June not to fight Melnik’s argument to vacate Vega’s murder conviction. The alternative, Melnik said, would have been court proceedings in which “all the dirty laundry would be aired on Oscar Moriel.”

The district attorney’s office allowed Vega to plead guilty to manslaughter, which brought a 15-year sentence. Melnik said he expects him to go free in four years.

“It would have been very ugly for them to have this before a jury,” Melnik said. “This is the proverbial Pandora’s box. The more (Sanders) dug, the worse it got, and the more astonishing the revelations became.”

Moriel was also assisting law enforcement in the case against Isaac Palacios, who faced the possibility of life in prison if convicted of murder for gangland killings in 2005 and 2006. Amid the revelations about Moriel’s role, Palacios was allowed to plead guilty to second-degree murder in one of the cases, and was released on probation.