Kendrick loved time with Angels, is ‘thrilled’ to be with Dodgers 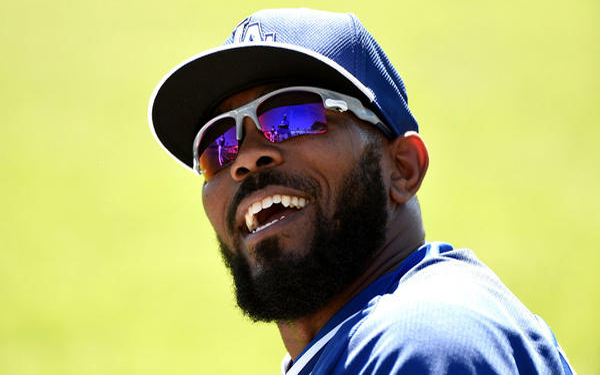 PHOENIX — Faster than you can say “bye-bye speeding bullet” and “red to blue,” Los Angeles baseball fans were thrown a curve over the winter.

It was Dec. 11, and the Dodgers were on a transaction tear.

The first shoe to drop was a head-scratcher for some, because Dodgers fans had really begun to take Dee Gordon to heart as their second baseman.

He had sprinter speed and 64 stolen bases. He had a solid leadoff year with a .289 batting average and brought excitement to every plate appearance. Every broken-bat single or lash into the corners or gaps had a chance to be extra bases. Opposing pitchers knew. Pitchers hate track meets. With Gordon, it was get him out or face chaos.

Everything seemed perfect. He was 26, not even arbitration eligible until 2016 and not a free agent until 2019. Very cost-effective.

Dodgers management apparently saw a maturity gap in the middle of their infield. Gordon was quick and seemed fairly solid defensively. At shortstop, Hanley Ramirez was a dangerous slugger who scooped up most of the ground balls hit his way but seemed to care more with a bat in his hand than a glove.

No matter. Both were gone.

Soon, the veteran Jimmy Rollins, 36, was the shortstop. And the last piece of the puzzle didn’t have far to travel.

The giant mural of stars at the entryway to Angel Stadium would be missing No. 47. After a baseball lifetime in red — nine years as an Angel, his only team in the majors — Howie Kendrick’s uniform number is presented in Dodger blue now.

“Only a color,” Kendrick said Tuesday at Camelback Ranch, the Dodgers‘ spring home and a 25-mile trek west of Tempe Diablo Stadium, where he used to spend this time of year.

“I thought I’d be an Angel forever,” he said. “I didn’t expect a trade this off-season. I hadn’t heard any rumors. But then my agent called. It was about half an hour before it went down and he wanted me to be ready.”

Kendrick might have been more ready than most because his name had been tossed around in past seasons and the Dodgers had been the one MLB club fairly public in their longtime positive assessment of him. The Angels were looking for pitching, and Kendrick was the price they needed to pay for young left-hander Andrew Heaney.

So Kendrick was sent on one of his shortest road trips ever, Disneyland to Downtown L.A. He knows baseball is a business, and he took it exactly as that.

“I cherish my time with the Angels,” Kendrick said. “I loved every minute there. But I’m also thrilled to go to another team that is a contender. I’ve played for losing teams, and that’s no fun. This is a good team.”

Kendrick is 31. The middle of the Dodgers infield is now grizzled and veteran.

If the Dodgers have this right, a much smaller percentage of ground balls will be a shade-your-eyes adventure. Double plays that should be routine will be. Cutoff men will be where cutoff men are supposed to be. Bases will be covered by the book, not by chance.

Kendrick is the dictionary definition of the word “solid.” Last season with the Angels, he batted .293; his lifetime average is .292. In 2014, he had 181 hits, 75 runs batted in and fielded his position with 11 errors and a .984 average. He is in the last year of a contract that will bring him $9.5 million. A good year could mean one more big contract. There is little question the Dodgers have the wherewithal on that front.

Kendrick’s hitting numbers last season came mostly from the cleanup spot, something necessitated by injuries to Josh Hamilton. Not many second basemen hit cleanup in the big leagues. Had he not been traded, he might be doing it again, with Hamilton’s status for 2015 uncertain.

“You know, I batted one through nine with the Angels over the years,” Kendrick said. “It never really mattered to me. I think I have figured out what I am as a hitter.

“Had (Manager) Mike (Scioscia) hit me at cleanup when I was younger, I might have had trouble with it. But last year, I think he knew me and knew I could handle it.”

This early in the spring, Dodgers Manager Don Mattingly hasn’t committed to a batting order, but he put a veteran lineup on the field Monday against the San Francisco Giants that had Kendrick batting fifth.

Parting is always sweet sorrow. But baseball players get moved around so much the public takes it for granted.

“I’ll miss a lot of the interaction in the Angels clubhouse,” Kendrick said. “But it’s a great clubhouse here, and I think this team will be a great fit for me.”

“I like the kind of guy he is,” Mattingly said. “Kind of a bread and butter player.”

Eight days after the trade, the Dodgers new Mr. Bread and Butter was meeting the media 20 miles or so up the 5 Freeway.

He was dressed in blue. And fine with it.