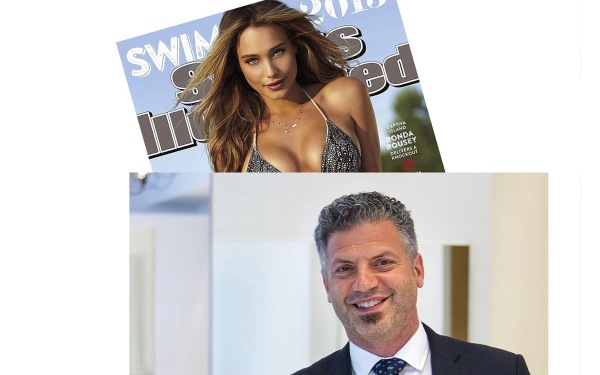 Anthony Cristiano could feel it in Sports Illustrated model Hannah Davis’ fan-blown hair that day at Blackberry Farm in Tennessee.

“I walked away feeling like, wow, we’ve really done something special,” said Cristiano, hairstylist for three of the 23 models in this year’s recently released swimsuit issue. It was his second year working alongside photographer Ben Watts and makeup artist Christine Cherbonnier.

“You could just see we were all in sync; Ben really pushed it photographically and we took more risks. They were much sexier pictures than what we did last year. It was definitely pushing the limits.”

So he wasn’t stunned when he found out via Instagram that a photo of Davis had been chosen for the cover. (He also wasn’t shocked that the pose provoked some controversy.)

But he was thrilled.

“The cover is selected out of something like 70,000 different photographs,” said Cristiano, whose celebrity clients include Adriana Lima. “It’s kind of like winning the lottery.”

Naturally, behind Davis’ unfussy-looking locks are a few tricks and tools that don’t meet the eyes.

“Because of the nature of the shoot, they’re looking for a sexy, tousled, easygoing type of style, not too overdone,” Cristiano said. “You don’t want to have a heavy hand or a hairdresser’s hand, so to speak. I use minimal products. To get it to look natural and organic, there’s a trick to still keep a finish to it.”

He starts by applying a root amplifier at the base of hair, then spiral-curls the hair throughout with a 1 ¼-inch iron.

“At the very end to rough it up a bit, I mist in what they would call an ocean spritz, any kind of texturizing spray, and then break up the curls with my hands.”

“And she comes up and it has a billowy, soft, somewhat frayed texture,” he said. “Those flyaway strands are what give it its ease and sex appeal.”

But the biggest reveal is this: “I add hair in,” Cristiano said. “That is the trick. There’s not one photo shoot that I don’t add in hair.”

The extensions aren’t necessarily for length but for density.

“And they allow the style to last throughout day,” he said. “We shoot each girl for two days and we do the makings-of video and still photography, and they’re long days. There were times we were up at 4 in the morning so we could get the 6 a.m. light and the fog from the Smoky Mountains. And then you get that beautiful light at dusk.”

He has begun selling the extensions he uses on set out of his Chicago salon for clients who want a truly luxurious mane. Using real hair, a wigmaker out of the Netherlands produces them under the name Balmain. They run from $450 on up to $2,000 for a full head of hair.

Cristiano tends to choose extensions a shade or two lighter than the model’s — or client’s — natural hair color.

“That contrast is really a nice play in texture. When shooting you have to know where the light is — backlit from the sun or front lit. Generally for every shot, I’m right next to her ready to jump in and shake the hair so the photographer can capture the right moment. You’ll see in most of the photographs that the hair has a soft flutter of wind, but that’s me working the fan, blowing the hair from the side sometimes, to make it sweep across the face.”

He custom-cuts the extensions to blend in with the woman’s own hair. You can stand over the wearer and not be able to detect them, he said.

“There are so many trade secrets and industry insider info we can give to our clients,” he said. “And it’s a woman’s secret after that — we’ll never tell.”