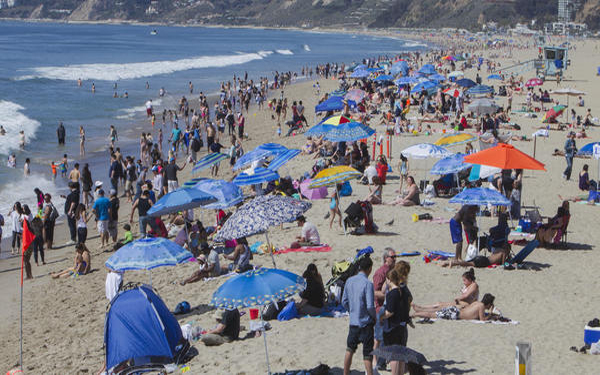 Crowds flocked to the beach near the Santa Monica pier as temperatures soared to 80 degrees in early March. Los Angeles and San Diego are among the top spring break destinations this year, per AAA.
(Credit: Gina Ferazzi / Los Angeles Times)

With a record number of Americans expected to travel by air this spring, Southern California has emerged as one of the top spring break destinations for winter-weary travelers.

The latest research on hotel booking data by the AAA found that Los Angeles and San Diego are the second- and third-most-popular destinations in the U.S. for spring break, behind Orlando, Fla.

Los Angeles moved up from the sixth-most-popular spring break destination in 2013, while San Diego was ranked eighth last year, according to the Auto Club.

"While Southern Californians are booking spring trips to destinations such as Hawaii, Las Vegas and Mexico -- and also taking advantage of available spring bargains to Europe -- much of the rest of the U.S. is planning to take advantage of the warm weather and numerous attractions here," said Filomena Andre, the Auto Club's vice president for travel products and services.

But other surveys have ranked Las Vegas as the top of spring break destination.

A survey by the travel website Obitz found that Sin City was the most-popular destination for spring break, based on an online survey of 778 U.S. adults who have traveled in the past year. Cancun, Mexico; Orlando, Fla.; the Dominican Republic; and New York also ranked high on the Orbitz list.

Las Vegas ranked as the top spring break destination among college students, according to hotel reservation data from the travel site Priceline.com.

The Priceline study found that Las Vegas ranked ahead of Orlando, New York, Phoenix, Orange County (Calif.) and Miami as the most popular destinations for college students. Among college students, San Diego ranked ninth most popular, followed by San Francisco and Los Angeles.

Expect airports at the top destinations to be crowded.

Airlines for America, the trade group for the nation's airlines, predicted that 134.8 million Americans will fly in March and April, a 2% increase over the same period in 2013 and the highest level since 2007.

The trade group attributed the increase in spring travel to "rising U.S. employment and personal incomes, an improving economy, the highest consumer sentiment in a decade and the continued affordability of air travel."