Arcade Fire’s Will Butler is moving out, not moving on 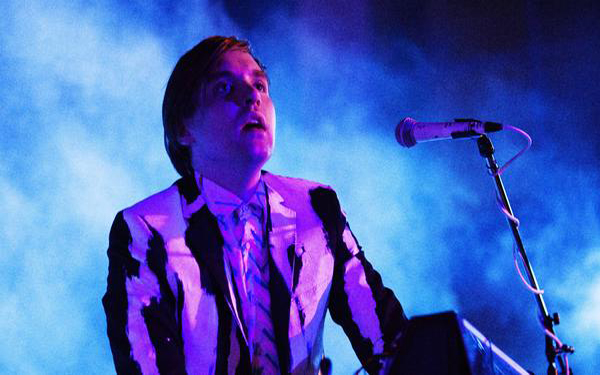 Who is Will Butler?

He is the Ringo, the goofy one, the guy who runs around on stage beating a huge drum. The problem with that analogy, though, is the Beatles had four Beatles and Arcade Fire, the Montreal-based mega group in which Butler plays guitars, drums and keyboards, has roughly 700 Arcade Fire members. At least it can seem that way. Do you have any idea what it takes to stand out in Arcade Fire? Butler has set fire to the hair of Regine Chassagne, his sister-in-law, who also plays keyboards and drums. He has climbed into the stage scaffolding. He screams into bandmates’ ears. At one show, he jumped into the moat between the stage and the audience. He recently told Pitchfork that at a Brooklyn show last year: “I took off my shirt and put on a bobble head and pretended to dance like David Byrne while rubbing my tummy.”

But here’s the thing:

Will Butler, 32, is a serious man, the former poetry editor of Northwestern University’s Helicon literary magazine. A 2005 graduate of the university, he was also well-regarded poetry major and Slavic studies minor; he once received a research grant from Northwestern to study 1980s rock under communism in the Czech Republic. Plus, he’s the only member of Arcade Fire to receive an Academy Award nomination — last year, with Canadian musician Owen Pallett, for their original score to the Spike Jonze movie “Her.”

This week, he released “Policy,” his first solo album, and perhaps not surprisingly, it’s a catchy, charming, happy thing that really wants to be loved. And likely, it will be. Butler spoke by phone last week; the following is an edited version of a longer conversation.

Q: You recently completed a project in which you wrote and recorded a song every day for a week based on something you read in London’s Guardian newspaper. How did you do that?

A: I would check headlines before I went to bed, read most of the main section, browse through and if I was lucky, have an idea before I went to bed. Then I would wake up around 7 a.m., read the paper again and try to have my idea, and also ideally lyrics and a musical idea, by 9 a.m. Then it would have to be done by 3 p.m.. So I was basically working steadily from 9 to 3 every day. Then I would start reading headlines again.

Q: There’s a great old Replacements song in which they sing a Minneapolis classified section.

A: Actually, there are lyrics I used that are literal quotes from articles. But the music didn’t quite lend itself to singing the news itself. If I had been with a band that could lay down a track first, I could have placed something like (an actual story) on top. But trying to compose a song? That made the experience different.

Q: Did majoring in poetry at Northwestern help?

A: It really did. Very much so. My poetry degree was a pretty hard-core technical degree. It wasn’t like “Paint your feelings on this page … “ It was more like “The stresses on these syllables are all wrong and stupid, so fix it! How dare you try to sound like Robert Frost! This sounds nothing like Robert Frost — go read Robert Frost!” (Laughs) So yes, it was helpful in the sense that there was a strictness to the structure of each song and I stuck to it. But you know, a song can be good and lyrics can be bad, and that can take the pressure off the lyrics at times. There are great songs with lyrics you will never even understand anyway.

Q: Did you study with Chicago poets?

A: There were a lot of local writers, I remember. Stuart Dybek was there. To be honest, it was not so local-poetry focused. But there were poets who taught — Brian Bouldrey, Christina Pugh. Oh, Christian Wiman…

Q: No longer the editor at Poetry.

Q: Are you one of those former students who has to visit their old professors when they’re in town?

A: (Laughs) I try to see Brian, definitely. Most of the ones I was close to have moved on and some of the others, some of the greatest who were at Northwestern, their classes were too popular for me to get into.

A: Well, my dad was an English major, then became a geologist, so …

Q: Speaking of poetics, you sing in on your new album about feeling lonely. Arcade Fire gets big, member-wise, in concert. Is being in Arcade Fire very lonely — the way living in a city is lonely?

A: In the context of that band, I am never lonely. My brother, Win, of course, and his wife are in the band. And everyone else I have known for 15 years. As a human being, I still get lonely. I think part of doing this album was a quest for personal glory, actually. Which stemmed from getting an Oscar nomination for work that the band had really done, too. So I thought if I am going to be personally glorified, it should at least be for something I did on my own. The “Her” soundtrack had stuff I recorded on my own, yes, but the Oscars don’t nominate bands. It would have been more accurate to nominate the band. Also, with this new album, now I had time, energy and a perspective to express. Being in Arcade Fire is satisfying artistically, actually. But I had songs I wanted to get out there, and none of these songs were Arcade Fire songs — not at all.

Q: The songs on your new album also suggest someone who listens widely, genre-wise.

A: That’s true but I think most people now listen to music that way. Listening widely has become more extreme, perhaps. Probably because of technology. That’s mostly for the good. But you’re right: I’m not a “Sgt. Pepper’s” guy. I am fundamentally a “White Album” man (i.e., rangy, and less tied to a single sound).

Q: But solo albums are often experimental things. This is arguably even catchier than Arcade Fire.

A: I am conscious of this being my introduction to the world (as a solo artist), so I don’t want a lecture so much as a conversation. But it is experimental in that I want to see how people respond, so I can respond to the response. You know, the Violent Femmes, their first album is amazing, their second is all this country and hard-core Christian music, and when people asked them about it, they would say, well, all of the songs from both albums were from the same period, just released at different moments. That’s a conversation.

Q: How big is your touring band?

Q: Do during Arcade Fire shows, do you ever look around the stage and think “I have no idea who half of these people are now”?

A: (Laughs). No, no, it’s great: Get sick of someone, there’s always someone else to hang out with.