Can anyone beat Kentucky in NCAA Tournament? 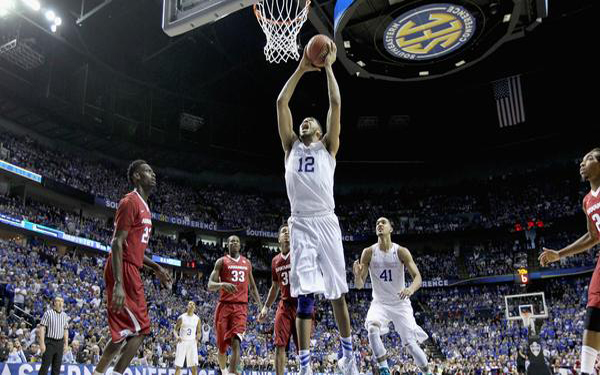 Everybody’s talking about Kentucky, the most heralded college basketball team this season.

It’s almost as if the biggest question is who’s the second-best team in America? (And, no, you can’t choose Kentucky’s bench.)

The most serious question entering the NCAA Tournament is this: Can anybody beat Kentucky?

The other No. 1 seeds are Villanova, Duke and Wisconsin.

“We haven’t lost one yet,” coach John Calipari said on the ESPN postgame telecast after the Wildcats won the SEC tournament. “That’s ridiculous, to be honest with you. We are ready. We know how hard it is going to be. Every game is going to be a war. We’re not going to get a pass.”

The Badgers, who beat Michigan State in overtime to win the Big Ten tournament title shortly before the selection show, will try to return to the Final Four after losing to Kentucky in last season’s tournament as a No. 2 seed.

The most disappointed No. 2 seed has to be Kansas, which fell into the Midwest bracket with Kentucky and No. 3 seed Notre Dame. The Irish have a round-of-64 matchup against No. 14 Northeastern.

The other No. 2 teams are Virginia in the East, Gonzaga in the South and Arizona in the West.

Of course, what’s Selection Sunday without a few sour faces?

Those left out who have the biggest gripes include Colorado State — a team with a No. 29 RPI that went 27-6 — Temple and Miami. According to selection committee chairman Scott Barnes, Colorado State lacked quality road wins.

Barnes said that the Bruins, who owned a No. 49 RPI and No. 29 strength of schedule, were “picking up steam” and “passed an eye test.” That was a curious statement, considering the NCAA typically emphasizes body of work over recent victories.

The committee had 12 contingency plans in place but said Wisconsin was a lock for a No. 1 seed regardless of the outcome of the Big Ten tournament championship game between Wisconsin and Michigan State.

Despite a supposed down season, the Big Ten ushered seven teams into the tournament: top-seeded Wisconsin, No. 4 Maryland, No. 7 Michigan State, No. 7 Iowa, No. 9 Purdue, No. 10 Indiana and No. 10 Ohio State.

The first four games in Dayton will feature matchups between Manhattan and Hampton (with the winner taking on Kentucky), BYU and Mississippi, North Florida and Robert Morris, and Boise State and Dayton.

But back to Kentucky. It’s hard to quantify exactly how strong the Wildcats are.

Is it their platoon-style system that has kept them fresh and run teams ragged? Is it how they have outscored opponents by a whopping average of 21 points per game, despite getting every team’s best shot? Is it a steel defense that holds opponents to 35.2 percent shooting?

All of the above.

“Our thing is, let’s be at our best,” Calipari said.

Which would certainly put Kentucky well above the rest of the field.