Grade colleges on how well they teach teachers? Universities balk 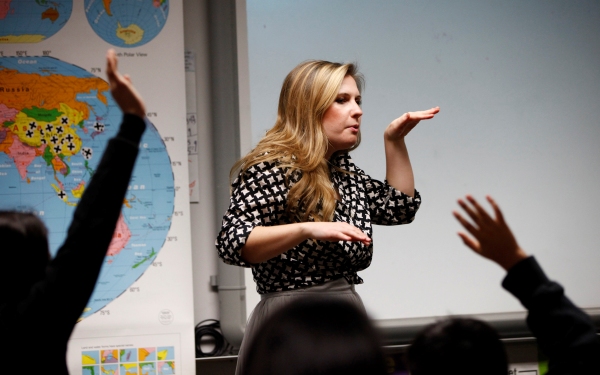 SAN JOSE, Calif. — With fresh credentials in hand, enthusiastic and energetic teachers charge into classrooms hoping to change young lives. But in the first year they often end up feeling overwhelmed, exhausted and unprepared to teach and manage classes.

Now the Obama administration wants to improve teacher training so that newly minted teachers arrive prepared and able to deliver high-quality instruction. Too many teacher credential programs focus on theory, critics say, and devote too little time to instructing teachers on how to teach. And reformers say too many teachers — 40 percent — leave the profession in the first five years, in part because they’re unable to handle a complex, tough job.

In an unprecedented plan that uses federal dollars as a lure, Uncle Sam would grade education schools and alternative training programs — partly on how well new teachers’ students perform on standardized tests. That could hit hard in California, where one national — if controversial — survey has ranked the state’s credential programs lower than average.

The federal Department of Education published proposed regulations in December, gathered comment and could issue final rules by midyear.

Not surprisingly, colleges throughout the state have fiercely objected to the proposals.

“The problem isn’t teacher education programs,” said Kathy Schultz, dean of the Mills College School of Education in Oakland. “These regulations use measures that aren’t scientifically valid.” Besides, she said, the rules would penalize schools like Mills that train teachers for inner cities like Oakland, where it’s more difficult to raise test scores.

But U.S. Secretary of Education Arne Duncan has labeled U.S. teacher preparation “mediocre” and has called for “revolutionary change.”

His backers cite the imperative to improve teaching in order to improve learning. Skillful teaching powerfully affects students, reformers argue, and teachers struggle far too long to master their craft.

“If you’re an engineer teaching bridge-building techniques and you taught a flawed method, you would be censured by your peers,” said Kate Walsh, president of the advocacy group National Council on Teacher Quality.

“There is a fundamental weakness across the system,” said Walsh. “It’s not just a few bad apples.” She maintains that programs are failing to prepare teachers and are not transparent about their results or effectiveness.

The proposed regulations would grade teacher training programs based on their students’ job placement, three-year retention in high-needs schools, surveys of alumni and their principals, evaluations and — most controversial — academic growth of alumni’s students. Students in colleges scoring the bottom two of four grades would lose eligibility for federal student aid, known as TEACH grants.

“I don’t feel a test score is the only indicator of student performance,” said Kelly O’Hara, a chemistry and physics teacher at San Jose’s Pioneer High. Student attendance, critical thinking skills, interactions with adults — all are relevant, she said.

The State Board of Education, California State University and others in the state education establishment have joined in opposition, saying the regulations would cost California $233 million to develop new tests and about half a billion dollars a year to enforce.

“Testing students of brand-new teachers and using that as a measuring stick is a wrong use of resources and energy,” said Meg Honey, who teaches in the St. Mary’s College Kalmanovitz School of Education. Most of those coming out of training programs are prepared to teach, she said.

So if not student performance, how should credential programs be judged?

“These systems are complex,” said Ira Lit, director of the Stanford Elementary Teacher Education Program. “I don’t have an answer to the question about what it should look like.”

“The inability of California to name what an effective teacher is creates the conditions where we go round and round,” said Tony Smith, former superintendent in Oakland, Emeryville and San Francisco and a regulation backer. “One of the key components of effectiveness is that a child makes a year’s growth in a year’s time.”

The acceptance rate for Stanford’s teacher program is 44.24 percent — compared with 5.07 percent for its undergraduate class.

In California, teacher candidates have to pass several tests, spend 45 hours in a school, and show they understand technology. Applicants to San Jose State’s program must have a B-minus average. “We are not taking people with C’s and D’s,” Dean Elaine Chin said. “Teaching is both a science and art, and is something you can learn.”

Walsh’s 2014 survey gave California’s teacher-preparation programs a D-plus. Of 119 programs surveyed in the state, 87 scored in the bottom half of the national sample and were not ranked. Only two scored in the top 10 nationally — UC Irvine and UC San Diego — and three more — University of Redlands, Mills College and UC Berkeley — earned a top-ranked status.

The ratings were intended to indicate the quality of teacher preparation. But schools of education roundly criticized the survey as irrelevant, unscientific and unfair, many refusing to cooperate.

Instead, Stanford’s Lit says the school’s own surveys show broad satisfaction among alumni, and that 80 percent were working in education. That kind of justification frustrates Smith. While teacher retention is important, he said, staying on the job without showing whether students are learning is like judging student achievement by taking attendance.

While California colleges may dismiss rankings of their programs, proof of success shows up in school superintendents’ recruitment. The Franklin-McKinley School District finds its best recruits in Midwestern universities, Superintendent John Porter said, and also in a San Jose State program that provides a yearlong residency, longer than other schools.

“We get superstars out of that program,” said Porter, who believes quality training is critical.

One of its graduates, Katie Andrist, a sixth-grade teacher at Meadows school in San Jose, disagrees with the proposed federal grading. “Even if you’re an amazing teacher and you’re all magical and wonderful, if you’re not part of a solid school with a solid principal and learning community, that won’t be reflected in your test scores.”

But there has to be a better way to ensure teacher program are producing good teachers, regulation backers said. “Every one of our kids in every classroom,” Smith said, “has to have an effective teacher.”