Robert Durst, subject of HBO’s ‘The Jinx,’ to be sent to L.A. in slaying case 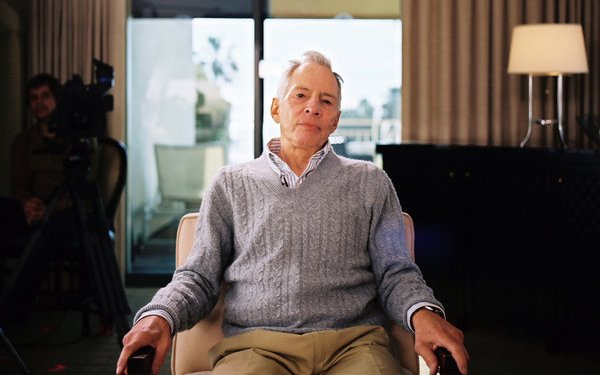 Robert Durst was the subject of the "The Jinx," a six-part documentary series on HBO.
(Credit: HBO)

NEW ORLEANS — An eccentric real estate scion who was the subject of an HBO documentary on his possible ties to several deaths waived extradition during a hearing in New Orleans on Monday and is expected to be sent to Los Angeles.

Robert Durst, 71, appeared in court after he was arrested by FBI agents Saturday afternoon in a New Orleans hotel at the behest of Los Angeles officials, who say they have uncovered new evidence linking him to the 2000 slaying of his friend, writer Susan Berman.

Wearing an orange jail suit, Durst appeared before Orleans Parish Magistrate Judge Harry Cantrell Jr. Asked by the judge if he waived his right to extradition to California, Durst, with hands shackled, said a simple “yes.”

Of the extradition order, Durst said, “Yes, I signed it, your honor.”

“I’m handing this to the officer and he’s going to notify California,” Cantrell told Durst.

The extradition agreement had been expected.

Law enforcement sources told The Times that authorities believed Durst might attempt to flee after it became obvious last week the investigation had picked up steam with the running of the HBO series “The Jinx: The Life and Deaths of Robert Durst.”

But attorney Lewis said Durst left Houston for New Orleans because he was being besieged by media as the HBO documentary neared its conclusion. Durst wasn’t hiding out and had been in New Orleans for a week, Lewis added.

Lewis earlier said Durst surrendered without incident to FBI agents at the JW Marriott. The arrest came a day before HBO aired the last episode of the documentary series about him.

Durst stayed in room 2303 and Lewis said he would call to check in daily, asking for him by name.

“He was just hanging out, enjoying New Orleans,” Lewis said. “He’s a guy from the hippie generation.”

Lewis had suggested Durst go to New York or Los Angeles, but Durst replied, “Those are the last two places I want to go.”

In Sunday evening’s HBO episode, Durst left his final interview to use the bathroom, appearing not to notice that his microphone was still recording as he muttered to himself, “What the hell did I do? Killed them all, of course.”

“There it is, you’re caught,” he said to himself in another moment. “What a disaster.”

Durst had agreed to lengthy interviews for the series and spoke about Berman, who was shot execution-style in her Benedict Canyon home just as New York authorities were preparing to interview her about the 1982 disappearance of Durst’s first wife.

Three times people close to Durst have vanished or been killed. He has been a suspect, person of interest or defendant in those cases, each time confounding authorities as they have tried and failed and tried again to build murder cases against him.

Police and prosecutors would not comment on what led them to accuse Durst now. But one source involved in the recent deliberations, who requested anonymity because of the ongoing investigation, said the documentary had played a role.

“As a result of investigative leads and additional evidence that has come to light in the past year, investigators have identified Robert Durst as the person responsible for Ms. Berman’s death,” the LAPD said in a statement issued Sunday.

Durst, accompanied by two attorneys, appeared briefly Sunday before a judge in a New Orleans courtroom. The judge ordered him held without bail until the Monday morning hearing to address Durst’s possible extradition to Los Angeles.

Richard DeGuerin, a renowned criminal attorney who defended Durst in a previous murder case and said he would mount his defense again, lashed out at the arrest, saying he believed it was timed to correspond with the last installment Sunday night of HBO’s documentary.

“Do I think this is a coincidence? Hell, no,” DeGuerin told The Times as he prepared to board a plane for New Orleans. “There has been rumor, innuendo and speculation for a number of years, and now we’re going to get our day in court on this.”

On Christmas Eve 2000, Berman’s body, with a single gunshot wound to the head, was found by police in her small home. She lived alone, and police were alerted only after neighbors spotted one of her dogs running loose and her door open. At the time, police said they believed she may have been killed a few days earlier, that nothing appeared to be missing from her home and that the assailant entered without signs of a struggle.

At the time of her death, authorities in New York were trying to talk to the L.A. writer about the disappearance of Durst’s wife.

In 1982, Kathleen Durst vanished shortly after she began talking about her desire to get a divorce from her husband. She had been fighting with her husband the night she disappeared, according to a good friend, who said Durst was worried about what her husband might do to her.

Berman acted as an “informal spokesman” for Durst, calling to give his side of the story to media outlets and people who suspected that he had a role in his wife’s disappearance. Durst and Berman went to school together at UCLA.

Less than a year after Berman died, garbage bags with dismembered body parts of Durst’s neighbor were found floating in the water off Galveston, Texas. A receipt in one of the bags and a bloody trail leading to his apartment led to Durst being charged with murder.

Durst quickly posted bail and according to police, went on the lam. He was arrested soon after in a Pennsylvania grocery store, where police said he was caught shoplifting a chicken sandwich and a Band-Aid, despite having $500 with him. Durst was returned to Texas, where he admitted to shooting and dismembering Morris Black, but claimed he inadvertently shot Black while struggling to wrestle a gun away from the man.

The 2003 trial was a spectacle in which his attorneys argued that after the killing a previously undiagnosed mental condition had propelled Durst into a traumatized state similar to an out-of-body experience. The trial was capped by four days of testimony by Durst in which he claimed he had no memory of cutting up Black’s body.