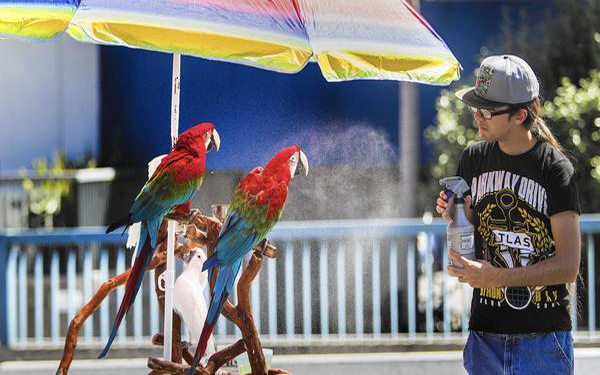 Howard Kaminsky stood in Palisades Park at the top of the Santa Monica Pier ramp, gently tossing Violet, his red-feathered eclectus parrot, from hand to hand.

The self-styled "bird man of Santa Monica" then flipped the bird into the air and, as she descended, opened his mouth, her signal to latch her black upper beak onto his bottom front teeth and dangle for a spell.

To a dozen amused bystanders, he boasted: "I've been putting birds on people for seven years here in Santa Monica. But Santa Monica feels we're a nuisance."

Many visitors might consider such creatures one of the quirky novelties of a day at the beach. But Santa Monica officials contend that aggressive handlers and their exotic beasties pose a public safety hazard and restrict access to the pier and other locations by taking over sidewalk space.

After hearing reports of snakes thrust into the hands of unsuspecting passersby and a youngster pecked by a bird, the Santa Monica City Council is poised to ban certain exotic wild animals and birds at the coastal destination's parks, pier, beach, Ocean Front Walk, Third Street Promenade and downtown transit mall.

Kaminsky, 53, who transports his birds a few days a week from Oxnard, is one of several handlers of exotic birds or snakes who team up on the pier or in Palisades Park, luring customers like old-time carnival barkers. They accept donations — typically $5 a pop — in exchange for letting visitors photograph themselves with the showy creatures.

He says his birds bring people joy and provide him with the flexibility he needs to make a living while caring for his son, who has Down syndrome, and his daughter.

"It's my passion," he said, showing off the parrot tattoos on his upper arms. "I love entertaining people."

Under a hot sun one recent Saturday morning, visitors from throughout the Southland and tourists from Mongolia and Turkey were among those flocking to see Violet and Kaminsky's other birds: an umbrella cockatoo (Whitey), a yellow-headed amazon (Sonnie) and a blue and gold macaw (Goldie).

They took turns stroking feathers and letting Sonnie use her talons and beak to climb their fingers like a ladder. They posed like pirates for cellphone photos, with Whitey or Goldie on their shoulders or atop their noggins.

When the birds weren't performing, they perched under umbrellas on the handlebars of Kaminsky's tricked-out tricycle or on the branches of a roost attached above the seat. They slurped water and snacked on nuts and grains from plastic dishes. Kaminsky misted them now and then with a spray bottle.

The birds were mostly well-behaved, although one belonging to Donald Bogner, a Northridge handler, quickly nipped off a girl's headband. Bogner returned the accessory to smiles all around — no harm, no fowl.

Inscrutable in his stroller behind Spider-Man sunglasses, 4-year-old Jack Schoen III seemed none too sure about holding Violet when Kaminsky pushed the bird his way. "He's looking like he doesn't trust it," said Angela Schoen, his grandmother, from Simi Valley. Jack finally took the bait, giving the bird a cuddle.

Far from being afraid, another 4-year-old, Raphael Rahav of Beverly Hills, seized a bird and cradled it, saying: "I like to rock and pet them."

"I think they're cool and fun," said his brother Benjamin, 7.

Pinhas Rahav, their father, stood smiling with his arms crossed. But he questioned the morality of putting exotic birds on display to entertain crowds of people.

"It seems like kind of abuse for the animals," he said. "Maybe [Santa Monica] is doing the right thing. When I see monkeys on Third Street, I think they shouldn't be there, not to entertain people. It's not fair."

Kaminsky and Bogner said handlers had offered to buy insurance and abide by regulations limiting the number of people who could display their exotic animals. The City Council was not interested. The panel unanimously approved the proposed ordinance 6 to 0 on its first reading last month and is expected to formally pass it March 24 on second reading. The law would go into effect a month later.

"They say we're a problem, and they're over there getting stoned," Kaminsky said, pointing to a group of transients with backpacks and guitars near where the pier ramp meets Ocean Avenue.

Ill-equipped roadside zoos and menageries and the "cub-petting trade" (in which operators charge customers to pose with and pet tiger cubs and other wild animals) are in animal advocates' crosshairs.

"Lots of work is being done to help captive wildlife across the country," said Nicole G. Paquette, vice president of wildlife protection for the Humane Society of the United States.

And Ringling Bros. and Barnum & Bailey Circus revealed its unexpected decision to stop using elephants in its shows. For decades, the company had fought lawsuits filed by animal welfare groups that contended it was cruel to transport elephants across the country in rail cars and to train them to perform by using or threatening to use sharp-ended bull hooks on them.

As for snakes and birds, she said: "They're exotic and wild animals. They belong in their native environments or in zoolike settings, not in crowded public places."