Kentucky, UCLA separated by more than brackets in NCAA tournament 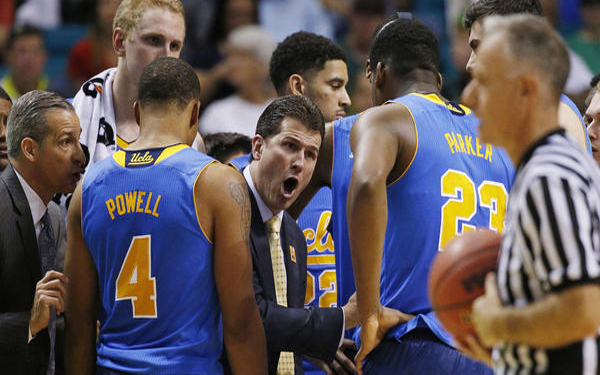 It was two different Selection Sundays for the two greatest men’s college basketball programs in the history of the NCAA tournament.

First off, one of the teams was anointed, not selected.

Kentucky, winner of eight national titles, earned the top overall seeding on its way to what everyone thinks might be a ticker-tape parade.

Wildcats players didn’t even bother, as is the tradition, to cut down nets after defeating Arkansas in the championship game of the Southeastern Conference tournament.

“Those aren’t the nets we’re really looking to cut down,” forward Willie Cauley-Stein said afterward. “We’re looking for something bigger.”

Kentucky is 34-0 and six wins shy of the first 40-0 season in the history of the sport. The Wildcats seek to become the first undefeated NCAA champion since Indiana in 1976.

At the other end of the bracket, to the consternation of some, UCLA sneaked under a fence into the field of 68.

The Bruins, winners of a record 11 national titles, in the 20th anniversary year of their last, were thrilled to avoid a play-in (first round) midweek game in Dayton, Ohio.

Instead, they will play Thursday in Louisville, Ky., against Southern Methodist and one of their former coaches, Larry Brown.

The Bruins ranked No. 42 on the selection committee’s seeding list of 68. That’s not great for a program of its pedigree, but terrific for one that had a suitcase packed for the NIT.

Kentucky is this year’s steamroller. As for UCLA, selection committee Chairman Scott Barnes put it this way during an interview televised on CBS: “We felt like they were gaining steam.”

The last four teams in were Dayton, Boise State, Brigham Young and Mississippi. The first four teams out were, most likely, Temple, Colorado State, Old Dominion and Richmond.

The committee ranked the top four schools in this order, in these regions: Kentucky (Midwest), Villanova (East), Duke (South), and Wisconsin (West).

Arizona made a case for top spot in the West after it throttled Oregon in the Pac-12 title game, but Wisconsin secured the fourth No. 1 after defeating Michigan State in the Big Ten title game.

Virginia actually came in No. 5 in the seeding order, with Arizona at six.

Arizona is No. 2 in the West and will open Thursday in Portland against Texas Southern, a pesky No. 15 that has wins this season at Michigan State and Kansas State.

West Coast basketball, particularly in Southern California, was down this season but actually rallied late with advances by UCLA and UC Irvine.

The Anteaters earned their first NCAA bid by defeating Hawaii to win the Big West tournament. Irvine was put on the No. 13 line and shipped to the East region to play No. 4 Louisville.

The positive news is Irvine got a time-zone gift, opening Friday in the Seattle pod, which should make travel more comfortable for 7-foot-6 center Mamadou Ndiaye.

The No. 13 team holds a 25-95 record against No. 4 since the tournament expanded in 1985, but Louisville might be vulnerable following the recent disciplinary dismissal of Chris Jones.

Louisville’s woeful three-point shooting — the Cardinals rank No. 309 nationally at 30.4 percent — could also pose a problem against Irvine’s zone and the inside presence of Ndiaye.

UCLA got paired, if not on purpose then at least hilariously, against SMU and Brown, who led the Bruins to the championship game in 1980.

Also in the field is former UCLA coach Steve Lavin, now at St. John’s, which is No. 9 in the South and plays San Diego State on Friday in Charlotte.

Conspicuously missing is Connecticut, last year’s national champion. The Huskies didn’t have the chops to make the field as an at-large and needed to win four games in four days to earn an automatic bid by winning the American Athletic Conference tournament.

Florida, another Final Four team from last year, will also be watching from home after finishing 16-17.

This might be a good time to dispense some fun facts before Kentucky takes its show on the road:

The Big 12 and Big Ten conferences tied for most teams in the tournament with seven. The Atlantic Coast and Big East conferences each had six, and the Southeastern Conference had five. The Pac-12 ended up with four — Arizona, Utah, Oregon and UCLA — one more than most expected.

Hampton’s entry, at 16-17, marks the fourth straight year the field has a team with a losing record.

Hampton is seeded 68th in the field, and will play Manhattan in Dayton on Tuesday for the right to get blown out by Kentucky on Thursday.

Kentucky is the 18th team to take an undefeated record into the NCAA tournament. Seven have gone on to win championships. Wichita State was undefeated entering last year’s tournament before having its perfect dream ended — by Kentucky.

Kentucky has been hellbent, for years, on eclipsing UCLA in national titles, narrowly missing banner No. 9 last year with a title-game loss to Connecticut.

Kentucky and UCLA are in this tournament together, but only in the most literal sense.

The teams, on opposite bracket sides, could meet only in the national title game.

Basketball
The Big Fail: Inside the Lakers’ most disappointing season in franchise history
622 views

Basketball
LaVar Ball: Reuniting his sons would be ‘biggest thing in NBA’
1,498 views

Basketball
The strange, ambitious marriage of the Ball family and Chino Hills
707 views