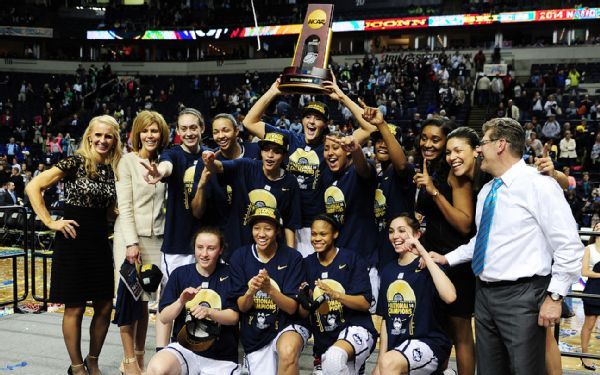 STORRS, Conn. — To say that UConn’s regular season was simply a prelude is theoretically correct in our first-things-first world. It also understates the consistency and domination that once again catapulted the Huskies to the top of the polls.

Winning 31 straight games has done more than provide the Huskies with another set of conference titles. It has provided ample momentum for another run into April. UConn was selected as the No. 1 overall seed for the NCAA tournament.

Notre Dame, South Carolina and Maryland are the other No. 1 teams in this year’s tournament.

The first step for UConn’s 10th national championship is a first-round game with St. Francis Brooklyn, the champion of the Northeast Conference. The Terriers (15-18) beat Robert Morris 77-62 Sunday to win the first title in program history. They also became the first team to win the NEC tournament with three road victories and just the second with a losing record.

The fifth-seeded Terriers defeated No. 4 Sacred Heart, then top-seeded Central Connecticut in double-overtime in the semifinal.

After that for UConn would be a sentimental journey back to the old days of the Big East. If the Huskies win, they will play the survivor of the 8-9 game between Rutgers and Seton Hall.

Rutgers (22-9), playing its first season in the Big Ten, was defeated by Northwestern 62-57 in the quarterfinal round of the conference tournament. The Huskies defeated the Scarlet Knights twice last season by a combined 63 points. And most of Rutgers’ players are still with them, including Kahleah Cooper, Tyler Scaife, Syessence Davis and Betnijah Laney.

The Albany bracket is loaded. Kentucky is the No. 2 seed, followed by Louisville, California and Texas. South Florida, which lost to the Huskies three times this season, including the American Athletic Conference final, is the sixth seed.

The goal is clear: The Huskies are after their eighth straight Final Four and 16th overall since 1991. They will try to win their third straight national championship and 10th overall in the past 20 seasons. If it happens, coach Geno Auriemma will tie John Wooden’s record of 10 titles complied in a 12-year period from 1964-75.

The Huskies seem equipped to do so. They sailed through a second straight unbeaten season in the American Athletic Conference, topping off another 18-0 regular season with wins against Cincinnati, East Carolina and South Florida in last week’s conference tournament.

Until South Florida came within 14 points in the championship game, the Bulls’ 23-point loss on March 2 represented the closest any AAC team got to the Huskies this season.

Their winning margin is 42.1 points, far ahead of the current NCAA Division I record (35.4) set by the 2001-02 team. The Huskies also held their 33 opponents to a field goal percentage of 30.1 percent, just one-tenth of a point from another program record set by the 2009-10 team.

After opening the season with a big win at UC Davis, the Huskies lost at Stanford, by two points in overtime, ending a 46-game winning streak dating to the start of play in the 2013 NCAA tournament. Since then, they have won 31 straight, brushing off challenges from tournament No. 1 seeds Notre Dame and South Carolina along the way.

As for this weekend, this is not the time of year that UConn falters. The Huskies have not lost in the first round of an NCAA tournament since March 17, 1993, when Louisville won at Gampel Pavilion.

That loss, which followed by 10 days the Huskies’ elimination from the Big East tournament by Providence, also provided another historical milestone. The Huskies have not lost consecutive games since. In fact, no member of its current team was alive on the day of UConn’s loss to the Cardinals.

Beginning with the 1993-94 season, when the Huskies lost in the Sweet 16 to North Carolina, the program has been eliminated prior to the Elite Eight only twice, in 1999 by Iowa State and in 2005 by Stanford.