Mid-Western Angst: Steve Buscemi Gets Behind the Lens for his Latest Feature 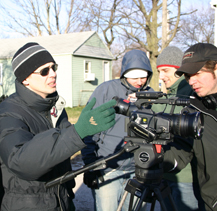 Boredom, angst and chronic frustration are the center of director Steve Buscemi's latest film, Lonesome Jim. Casey Affleck plays Jim, an adult who moves back home to his parents and brother only to see a bleak future before him. Liv Tyler plays his girlfriend and the person who occasionally provides emotional support and guidance. In the film, which takes place in Indiana (where it was entirely shot), Buscemi wanted to explore several issues about directing, acting and personal aspiration.

Lonesome Jim takes viewers through the life of an entire mid-Western family that cannot peacefully communicate, share feelings or find motivation for life. Jim is the center and the one who combines immaturity, slight selfishness and isolation with determination. After his brother endures a near-fatal car accident, Jim ponders his life, his aspirations and finds emotional solace in his new girlfriend.

"I think he‚s a lot of things. He‚s a little bit selfish and insensitive. So, I think that tends to keep other people at a distance or he distances himself from people. There are certainly people around him who are trying to reach him like his mother and Anika (Tyler)," says Buscemi.

New York's fierce competition in filmmaking gave Buscemi the armor and necessary expertise to delineate the character of Jim and his struggles with his own life and his family. „If I can find material that I relate to, it doesn‚t matter to me where the material comes from as long as I have a feel for it," says Buscemi.

The emotionally battered Jim and the overall turbulent family relations were the gist of the film for Buscemi, not the plot. "It's the characters, this whole family, where they‚re each in their own world. It's hard for them to communicate. The humor in it I really like. It was the comedy; it came from those sort of these dark places. It's a comedy about depression but they wouldn‚t let me get away with that," he adds.

Using hand-held, inexpensive cameras and shooting on a remarkably short timeline 16 days the crew was able to transport audiences to a mid-Western, self-contained town. Low-key lighting was a key tool for establishing the gloomy tone and theme of loneliness.

By partly utilizing the visual component of storytelling and a grainy look, Buscemi created an atmosphere of sedation and aimlessness. However, he emphasizes that the choice of actors was very important, not simply him being the artistic and creative engine behind the film.

Using occasional humor and sarcasm were also tools in his arsenal. Humor "was definitely in the script or I wouldn't have gotten involved," he says. "But, I think a key to that is casting, people whose sensibility I know can deliver that."

Buscemi's film, then, is an eclectic blend of humor, emotional unrest, unfulfilled aspirations, lack of communication within a family ˆ and all of these aspects are presented in realistic form.

For Buscemi, the task of directing seems uncertain, for his talents are much better in front of the camera than behind it and his own comic performances and offbeat characters have better established his reputation than any work behind the lens. "The more I direct, the more comfortable I get doing it. I don‚t know if I'm getting better at it but I certainly feel " I don't know if Œat ease‚ is the right word," he says. "But, it's less intimidating and less mysterious.
Article posted on 4/3/2006
This article has been viewed 2379 times.