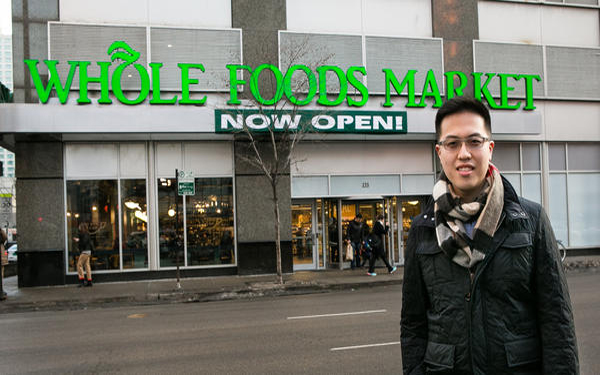 Earlier this month, Patrick Wong was right where food-industry experts expected him to be: eating mac and cheese at a table in the perimeter of his neighborhood Whole Foods, surrounded by people doing pretty much the same thing.

“If I had the time to actually cook, I’d just get groceries,” said Wong, 27, who lives in Chicago. “It’s a combination of laziness and convenience.”

In an effort to take a bigger bite of the food market and appeal to the massive millennial demographic, grocery stores increasingly are adding restaurant-style options and spawning a new hybrid: the “grocerant.” In recent years, consumers have shifted from eating out to eating at home — it used to be half and half, Lempert said, and now food at home accounts for 60 percent of meals — and drugstores, specialty stores and convenience stores all have increased in popularity.

“Supermarkets have lost market share, about 15 percent, to other retailers,” said Phil Lempert of supermarketguru.com. “The supermarket is trying to recapture consumers by being all things food, looking holistically at food.”

Lempert defines “grocerant” as a grocery store that offers groceries as well as prepared foods and “a sit-down dining experience.”

The supermarket subset has taken off in recent years, according to Aimee Harvey, managing editor at food-industry consulting firm Technomic. Harvey specializes in “retail meal solutions,” or freshly prepared, unpackaged foods. In 2007, that was a $24.8 billion market. In 2013, the market had grown to $34.6 billion and supermarkets accounted for $19.5 billion of that.

That’s because “grocerants” can offer both convenience and quality, Harvey said.

“It’s about convenience, it’s also about a consumer that wants value,” she said. “We’re becoming more of a population of foodies, people who are more informed about food.”

And one age group in particular is driving grocerant growth: millennials.

“This is a customer base that’s pretty much grown up with things at their fingertips,” Harvey said. “They want what they want when they want it. Supermarkets that provide a wide range of dining venues provide that for them.”

And there’s a reason that food has become such a millennial focus, Lempert said.

“Millennials are very passionate about food, and because of poor-paying jobs and living at home and so on, they were able to gravitate towards food as an affordable, fun way to develop community,” he said.

Take Eataly in Chicago, for example: Shoppers can grab-and-go a cheaper sandwich or sit down for a pricier meal at one of the grocery’s in-house restaurants. And Lempert mentioned the oyster bars at Mariano’s stores in Chicago as places young people can congregate around food.

“The oyster bar has been a huge draw for Friday and Saturday night,” he said. “You look at the kind of identity a supermarket can get, it really positions them in front of other food stores in a very meaningful way.”

So what’s next for “grocerants”? Expect smaller grocery stores with a stronger focus on fresh foods, Lempert said. He and Harvey both said the perimeter of the stores, where fresher foods, hot bars and sit-down restaurants generally are located, will be expanding at the expense of the center aisles, which traditionally stock packaged foods and ingredients.

“Of course the customer is always going to need certain center-aisle things,” said Harvey. “But as these grocerants really make their mark, it’s all about the perimeter of the store.”