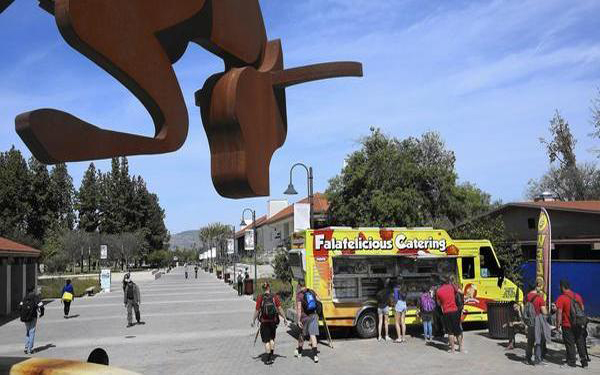 Students line up at a food truck at Pierce College in Woodland Hills. The campus has no cafeteria.
(Credit: Mel Melcon / Los Angeles Times)

"I mixed in some barbecue and chicken sometimes, but it was mainly cheeseburgers and fries," said Galan, who estimated he gained at least 10 pounds.

Like many who gain the dreaded "freshman 15," Galan said his food options were limited. And, in his case, they really were.

Pierce College doesn't have a cafeteria or food court, so the nearly 22,000 students who attend the Woodland Hills campus either have to bring their own meals, order from trucks or buy sandwiches from a campus cafe that has a maximum seating of 60. The truly desperate could also raid one of the school's nearly 40 vending machines.

"It's hard to get a salad, even if you wanted to," Galan said.

Pierce isn't alone; Los Angeles Community College District officials closed cafeterias at most of their campuses years ago to save money. The move saved nearly $700,000 annually, they said.

The district, the nation's largest two-year college system, saw its enrollment decline by about 49,000 students from 2008 to 2013 and its budget shrink by about $100 million from 2009 to 2013. Administrators also cut classes and athletic programs.

Pierce may have one of the most difficult dining situations to resolve. Located on Winnetka Avenue, Pierce has few, if any, restaurants within walking distance, students say.

"When I go out to eat lunch, I'll drive 15 minutes away," said Seth Perlstein, the editor in chief of the campus newspaper, the Roundup.

Making the situation more frustrating for many students is that there's room for a cafeteria in a building that was completed two years ago, but the large dining area on the first floor has remained empty.

A small coffee shop on campus called the Freudian Sip offers some food and beverages, but another cafe that also sold some food recently closed.

Finding occupants for the now vacant cafeteria could be difficult because there's only one kitchen, although it does contain a grill, a pizza oven and an Asian food area with a specially created appliance for woks, Pierce officials said.

The campus dining scene has evolved since Pierce's cafeteria was designed eight years ago, said Francisco Rodriguez, the district's chancellor. "The economics for food services, due to the aggressive positioning of fast food and fast casual, has impacted the college's ability to provide the initially intended services," he said in an email.

Many campuses have mall-like food courts, and several area community colleges, including Santa Monica and Glendale, have multiple places to prepare food in their dining areas, officials there said.

Los Angeles district officials initially tried to find a single vendor for all their campus cafeterias, but they are now also considering "customized solutions for each campus," Rodriguez said.

As for Pierce, Rodriguez said hiring or joining with Cal State Northridge to provide food might make the most sense since "they truly understand higher education food services" and that hiring chains might require multi-year leases, which the district would not sign until it does more research.

Galan, an electrical engineering student, said he learned his lesson after packing on the pounds last year. He exercises more and tries to bring food from home on days when he has class. When he doesn't pack a lunch and has to resort to a food truck, he stays away from the burgers.