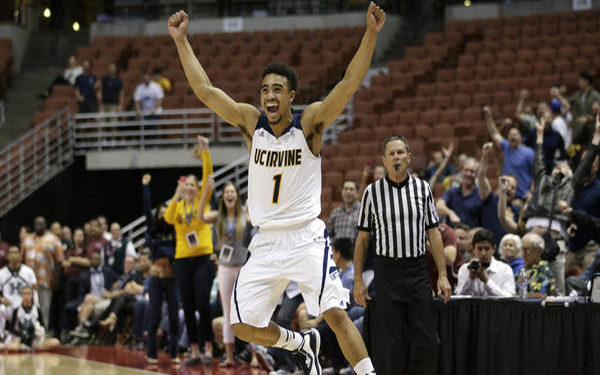 So the UC Irvine senior said he was thrilled to be among the loud fans who stormed the court Saturday night at Honda Center after the Anteaters earned their first appearance in the NCAA men’s basketball tournament by defeating Hawaii for the Big West Conference title.

But when Datta returned to campus later that evening, the party was over.

“It was like crickets were the loudest thing around,” he said.

With Irvine students still in the midst of final exams, the campus remained quiet Monday, the only discernible buzz coming from laptops and other electronic devices.

“If it weren’t for finals, I think people would be a lot more stoked,” Datta, a business major, said as he studied while eating lunch at a campus food court.

There should be a noticeable surge in excitement Friday when the Anteaters play perennial power Louisville in a first-round game at KeyArena in Seattle. This is the first dose of March Madness for Irvine, which is celebrating its 50th anniversary and has more than 29,000 undergraduate and graduate students who attend classes at its sprawling, beach-close campus.

The school has won NCAA volleyball titles and made College World Series appearances in baseball, drawing attention for its unusual mascot and nickname, but otherwise has limited experienced on a national sports stage.

Bob Olson, the school’s associate athletic director for media relations, said he had been “nonstop” busy since Saturday, fielding congratulatory text messages and phone calls and media requests for player and coach interviews.

“It is fantastic to have interest in your program like this,” said Olson, 59, who has worked at Irvine for 33 years. “It’s kind of why I’ve hung on so long in my career, to experience this. It’s finally come to fruition.”

Mike Izzi, Irvine’s athletic director since December 2007, said the tournament berth was a culmination of effort to “match the academic reputation” of the university.

“It’s a great opportunity in our young history to kind of make it to what a lot of people might consider to be the big time in college basketball,” Izzi said, adding that a tournament berth “was one of the items on the bucket list we wanted to check off.”

Datta, the business major, said interest was building — he received a request from a friend to express mail an Irvine T-shirt — and that students would rally.

“Hopefully, we can upset Louisville,” he said.

School officials said they were working out plans for possible viewing events on Friday.

“Honestly,” he said, “we get bigger crowds for [international] soccer.”

That could change Friday at 1 p.m.

“Judging by what I’ve heard from people so far,” he said. “I expect it will be a big crowd.”

As he walked a path through Irvine’s peaceful Aldrich Park, Samuel Rodriguez, a sophomore biology major from Riverside, said the NCAA tournament berth was “a boost of pride.”

“It’s nice to have this after the stuff that happened with the flag,” he said.

Irvine was in the national spotlight this month when a student government council voted 6-4 to remove the U.S. flag from a lounge area. The action was vetoed days later by the student government’s executive cabinet.

This week, students are focused on finishing the winter quarter strong and preparing for next week’s spring break.

Brian McCall, event coordinator at the campus career center, said that people who care about Anteaters athletics are excited about Friday’s game.

Jessica Zamora, a sophomore social psychology major from San Pedro, said she would still be in the midst of finals and would follow the game on social media.

“It’s cool for us, personally, to be part of that — we were here for the first time,” she said.

For the first time Monday, senior Dayton Pierce was able to tell prospective Irvine students and their parents that Irvine was an NCAA tournament team.

“It’s another thing that I feel like really does spark interest,” he said after his second tour of the day, adding, “Like, ‘Wow, they made it. They’re good enough. We can do this.’ ”