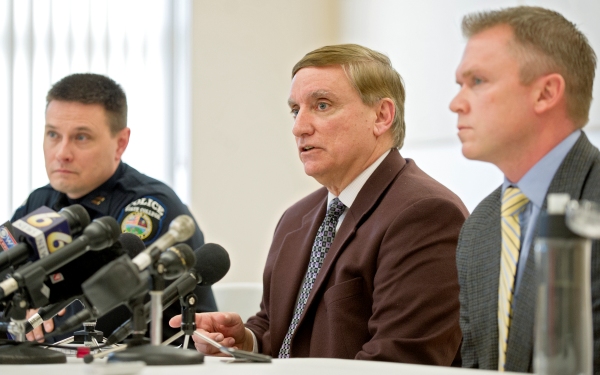 The photos and descriptions accompanying those images, outlined in a affidavit of probable cause, enabled police in this borough to secure a search warrant against a now-suspended chapter of Kappa Delta Rho, which investigators said Tuesday kept an invitation-only Facebook page that was anything but tame.

Nude and semi-nude pictures of students, including a Penn State cheerleader, are among the images that individuals apparently were allowed to comment on as they visited the page, according to a former fraternity member who is quoted in the affidavit.

The private page was fraternity-operated and allowed members to share photos of unsuspecting victims, drug sales and hazing, said the informant, who provided police with printouts, according to the affidavit. The Facebook page had 144 active members, including students and graduates, police said.

Some females appeared in “sexual or embarrassing positions,” the affidavit stated. It appears that “the individuals in the photos are not aware that the photos had been taken.”

Coming a week after the furor over a racist fraternity video at the University of Oklahoma — and amid an ongoing national discussion of campus sexual assault — the Facebook posts including the images of female students drew strong denunciations on and off Penn State’s campus and across social media.

No one yet has been charged, but police said their investigation is “active and ongoing” and urged victims or others with information to contact them or Penn State. The chapter is now barred by Penn State’s Interfraternity Council from all activities indefinitely and was informed by Kappa Delta Rho’s national headquarters in Greensburg that it is suspended for at least a year and will be reorganized.

Calls to the national office seeking comment were not returned Tuesday. Chapter leadership could not immediately be reached.

“The evidence offered by the Facebook postings is appalling, offensive and inconsistent with the University community’s values and expectations,” said a statement from Damon Sims, Penn State vice president for student affairs. “The University will hold accountable any groups and individuals found responsible.”

At a late afternoon news conference, assistant State College police chief John Gardner declined to estimate the number of potential victims, though he described the photos as being almost exclusively of females, save “a male or so in there” in various states of dress or disrobed.

“First of all, we’re looking at an invasion of privacy, which is a misdemeanor charge,” he said in response to questions about potential offenses. “We can also be looking at harassment, which could be a summary or a misdemeanor level. We’re going to explore every and all options.”

The former fraternity member approached police on Jan. 18 and told them about the page, named “Facebook 2.0.” He said it was created about eight months ago after an earlier page called “Covert Business Transactions” was discovered by a victim and shut down, the affidavit stated.

The former member told police that a member accidentally left the initial page logged in on a computer and a woman visiting the fraternity observed a topless photo of her posted to the group.

The search warrant, dated Jan. 30, is for the private Facebook page 2.0 and its contents and to obtain “copies of any postings, messages, pictures, names and other information related to possible criminal activity,” the affidavit stated.

Members can remain at the fraternity’s house during the suspension, said Penn State spokesman Reidar Jensen. The scene there Tuesday afternoon was quiet.

Scott Irlbacher, director of special programs and student community standards at Robert Morris University, said he believes the frequency of trouble at fraternities nationally is generally unchanged, but the 24-hour news cycle and social media amplify the incidents.

Asked about the apparent disconnect between the virtues including respecting others espoused by national fraternities and transgressions on individual campuses, he said, “You throw 50 to 100 18- to 21-year-old men in an organization with limited supervision and what you can get is a ‘Lord of the Flies’ sort of thing,” he said.