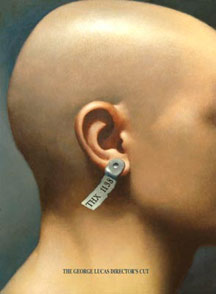 A long, long time ago, in an America far, far away, George Lucas directed THX 1138 based on his award-winning USC short film. It is a simple tale of a man named THX (Robert Duvall) who is trapped in a subterranean futuristic society where the government enforces the use of mind-numbing sedatives, and everyone — men, women and children — have shaved heads and wear white jumpsuits. The whole society is glaringly WHITE; white rooms, white hallways, even a massive white prison with an undetectable ceiling and walls that conveys an oddly oppressive sense of vastness.

For recreation, THX watches holographic television or prays to a somber television god; otherwise he spends his days at a manufacturing plant building robot policemen. These ominous, chrome-faced guards proliferate all throughout this shopping-mall society, beating transgressors with clubs.

THX is utterly complacent until his live-in mate (Maggie McOmie) halts their drug use and teaches him about love and sex.

The sex scenes are visually fascinating. Embracing in the sterile environment, Duvall and McOmie resemble dual embryos that — through sex — are somehow giving birth to their selves. She is soon taken away and liquidated, prompting THX to escape to the surface world. Hilariously, his escape has a budget; once the police have spent a certain amount of money, they will simply turn back. So the upshot is, can THX outrun the almighty dollar?

The film is technically beautiful, although marred by a few low-budget props and effects, mixed with the new "director’s cut" additions. Duvall is terrific, as is Donald Pleasance as Duvall’s reluctant escape partner. McOmie gives a sensitive performance that makes it a real shame this actress didn’t go on to have the career she deserved.

This is Lucas’s art-house film, fusing European art cinema with Buck Rogers-era sci-fi. Made in 1969, it reflects ’60s radical values: It’s an anti-authoritarian, anti-consumerism, intentionally political film. It also carries a powerful message by Lucas being, to escape the prison of the world, all you have to do is walk away.