Antonio Banderas: Has all the Right Moves in Take the Lead 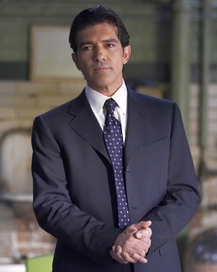 Whether he is dodging bullets in Desperado or skillfully handling a sword in The Legend of Zorro, Antonio Banderas moves with the grace of a dancer.

It‚s not surprising, then, that he‚s starring in Take the Lead, an inspirational movie about the efforts of Pierre Dulaine ˆ a Manhattan dance instructor who teaches the waltz, foxtrot, Cha Cha and tango to a group of misbehaving, inner-city kids in the South Bronx raised on hip hop and rap.

Screenwriter Dianne Houston moved Dulaine's story to a high school setting and developed the idea of what would happen when the worlds of ballroom dancing and hip hop collide. Veteran music video director Liz Friedlander makes her feature film debut with Lead, which blends together a handful of different themes: fish-out-of-water, cultures colliding and mentor as life-changing force.

Banderas is that rare breed of actor who seems at home in comedy, drama, musicals, action and even kids‚ films. With the success he has experienced in America, it hardly seems plausible that less than 20 years ago he hardly knew a lick of English and was more familiar to foreign film audiences for his roles in Pedro Almodovar‚s pictures.

Since then Banderas has prospered in Hollywood and has even conquered Broadway. Banderas received a Tony nomination for Best Actor in a Musical for his Broadway debut in "NINE," a musical inspired by Fellini's 8 1/2.

After performing with Chita Rivera for 228 performances on Broadway, he felt confident he could pull off Take the Lead.

Producer Diane Nabatoff thought Banderas was an obvious choice for the role of Dulaine, a dapper gentleman with an international flair who teaches ballroom dancing to inner-city children in New York City through an outreach program he created called "Dancing Classrooms."

"Pierre is a person who can walk into a room, command attention and convince you to do the impossible. He has presence and charisma and so does Antonio," Nabatoff says.

A key scene in the film has Banderas demonstrating the tango as a way to show his students that ballroom dancing can be cool. Banderas was already familiar with the tango, but he relied on choreographer JoAnn Jansen to make him look convincing.

"JoAnn knows how to make a person look like a dancer even if they don‚t dance at all. You start acting like a dancer ˆ how to look at the girl, position your body, the movement of the head; these things can make the audience believe that you are a better dancer than you actually are," says Banderas.

The actor feels the hip-hop style that is popular in clubs today is more about showing off rather than creating a bond with another person.

"You go to a disco now, and it‚s about people showing off their individual talents look at me, look at what I do but it's nothing about the other person. Dancing, especially ballroom dancing, brings a certain intimacy and discipline you have to look into each other's eyes, you are holding each other ˆ all of those little things create an internal rhythm," he says.

Portraying teenagers who face tough challenges growing up in a crime-infested and poverty-stricken neighborhood in the South Bronx, Rob Brown and Yaya DaCosta didn't have to look far from their own neighborhoods for inspiration.

Brown and DaCosta's backgrounds gave them added credibility to play their roles. Born in Harlem and raised in Brooklyn, Brown was raised by his mother, a social worker, and admitted he knows a couple of people in jail, who he played ball with growing up, and a few others who sell drugs.

Brown‚s character, Rock, is mixed up with the wrong crowd and makes some bad choices, but there‚s a sense that he‚s trying to do the right thing.

DaCosta‚s character, Larhette, is a good student with a troubled home life. Her mother works as a prostitute which means Larhette has to occasionally fight off her mother‚s customers while also caring for her baby brother.

DaCosta was born and raised in Harlem. "My Œhood isn't one of the nicest in the city," she says, but being raised by two educators gave her more opportunities. „My friends, when I was younger, had more in common with [LaRhette] than I did on that level, but it was right there. All I had to do was go to my block," DaCosta adds.

This is Brown‚s fourth feature film. The 22-year-old first appeared opposite Sean Connery in Gus Van Sant‚s Finding Forrester. DaCosta, 23, entered acting via "America's Next Top Model" and has since appeared on UPN's "Eve" and in the Isaac Mizrahi short film Super Model Hero.

Before filming began, all the young cast members went through a four-week dance camp with Dulaine, choreographer Jansen and brothers Rich and Tone Talauega, who specialize in hip-hop moves. While most had the moves necessary to pull off the hip-hop sequences, few had any training in ballroom dance.

"All the dance styles that I‚d done before were very individualistic it was about you expressing yourself in a dance studio or on stage,‰ DaCosta says. This was completely different because it's a conversation between you and your partner."

Brown had no formal dance training, but was confident he could keep a beat. His sense of timing served him well, but he found the more formal dances, like the waltz, were a challenge to learn.

"The waltz is real technical. You can't get away with screwing up as much as you can in the other forms,‰ he says.

Having a month to get to know each other helped the cast develop friendships that later transferred onto the screen.

„You‚d think that after rehearsing with each other all day, every day we‚d get sick of each other, but we‚d go back to the hotel and hang out in somebody's room. We'd eat together or go out at night if we didn‚t have to work the next day. Actually, we‚d end up practicing our moves in the club," DaCosta says.

Trips to the clubs "helped build that group dynamic and also helped create that dance fusion at the end because we were there practicing Pierre‚s salsa steps to hip-hop music," DaCosta adds.

Both Brown and DaCosta have trouble singling out just one person who was the best dancer in the cast.

"I don't know who the best is, but I‚m probably the worst," jokes Brown.

DaCosta says she was pleasantly surprised by everybody. "Some people hadn't been trained at all in anything, but they still had their own way of moving. It was nice to see all those physical personalities come together."