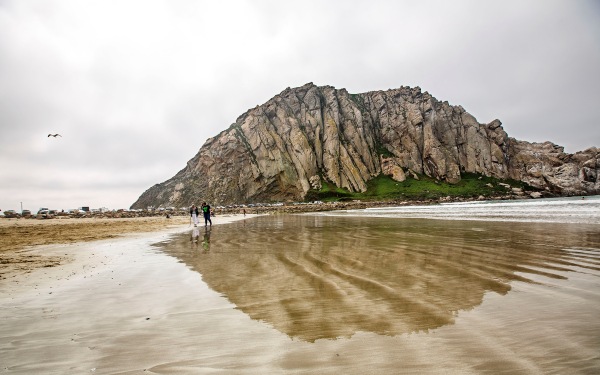 MORRO BAY, Calif. — Craggy, dome-shaped Morro Rock rises 576 feet above the shore, an attractive site for climbers and a sacred one for two Native American tribes.

And that’s the essence of a dispute between the tribes that has simmered for more than a decade.

The Salinan Indians say the dominant landmark on California’s Central Coast may be climbed on dates prescribed by the heavens. The Northern Chumash believe it should never be tread upon, only appreciated from afar.

The feud entered the legal arena last December, when the tiny Northern Chumash Tribal Council filed a document in civil court arguing that the Salinan Tribe of Monterey and San Luis Obispo counties should not be allowed to “desecrate a registered Chumash Nation sacred site” and seeking proof of the Salinans’ right to climb it.

In the folklore of the Chumash, the rock was called Lisamu, positioned at the mouth of a magnificent estuary in the heart of tribal lands that encompassed a large fishing village.

“Lisamu is alive with life that needs to be protected and honored, not trampled upon,” the tribal council wrote in a position paper unrelated to the court filing.

In the traditions of the Salinan tribe, it was called Lesamo, where the Falcon of ancient legend killed the serpent Teleekatapelta.

On a recent gray morning, Fred Collins, an elder with the Northern Chumash Tribal Council, stood at the base of the rock and looked skyward as a peregrine falcon glided over the jagged peaks.

“This is a rookery for unbelievable birds,” Collins said. “And it’s a migratory path for so many. Aside from the sacred issues, why would you want to interfere with that?”

Today, hiking Morro Rock — a state historic landmark and peregrine falcon preserve since 1968 — is prohibited for most of the public. But the Salinans have been climbing it on and off since about 2000, when elder John Burch sought a permit to conduct rituals atop the volcanic mass formed more than 20 million years ago. The permit was approved.

“It’s broadly the policy of the department to allow reasonable requests for religious practices to take place on state park property,” Joe Mette, then district superintendent for the California Department of Parks and Recreation, said in 2002. “He made some fairly compelling arguments.”

In 2006, the Salinan Indians, state parks and the Native American Heritage Commission, a state agency responsible for helping protect Native American cultural resources, formalized an agreement allowing the tribe to climb the rock for religious ceremonies twice a year during the summer and winter solstices.

Burch told the Los Angeles Times in 2002 that he climbed Morro Rock to practice rituals handed down through the ages. He sat alone at the top in blackness and starlight and entered an altered state, asking for spiritual guidance, he said. He finished the night of prayer feeling as if he was “floating on air.”

Burch said recently that five of his tribe’s 371 members ascend the rock, the maximum number allowed under the most recent five-year agreement that expires in 2019. Photographs of past climbs show tribal members carrying backpacks as they scramble up brush-covered boulders to forge a trail along the jagged incline. Another photo from 2003 shows Burch standing alone at the top of the peak.

The rock’s rugged landscape makes for a tough climb. Three 15-year-old boys had to be rescued last month while they were trying to scale the east face, and 10 days later, another climber was rescued after he got stuck part of the way up.

As for Burch, he declined to comment further, saying he wanted to wait until the Native American Heritage Commission weighs in.

“There’s a process in place at this time, and we’ll wait to see what the findings are at the end of the process,” he said.

The Northern Chumash Tribal Council maintains that it was never consulted about the arrangement but should have been because its 35 members were directly affected by the action, said Dennis J. Balsamo, an attorney for the tribal council.

Under state law, the state parks department is required to consult with Native American tribes when their sacred sites or cultural institutions are affected by projects or policies.

In a petition filed in San Luis Obispo County Superior Court, the Northern Chumash Tribal Council — a separate entity from the Santa Ynez Band of Chumash Indians, which owns the Chumash Casino in Santa Barbara County — is seeking documentation proving the Salinans have a right to climb the rock.

In the back-and-forth on the issue, Collins also has been asked by the commission to prove his heritage, and the tribal council is seeking any documents from the agency that may have questioned his ancestry.

“It is unheard of that any Native American would be required to prove their heritage,” the document states, adding that the council “believes its members were being singled out for harassment.”

As further evidence that the Salinans have no claim on the sacred site, the Chumash say the historic boundary between the two tribes rests some 40 miles to the north at Ragged Point in Monterey County, citing research by anthropologist Robert O. Gibson.

“There is no historic or religious connection between the ancient Salinan People and Morro Rock,” Balsamo wrote.

The Chumash don’t mind if other tribes gather for ceremonies at the base of the rock, Collins said, but climbing it goes too far.

“Morro Rock has such a great presence along our coast,” Collins said. “Fishermen and people of old times always viewed Morro Rock as a landmark in the ocean with special energies. It’s a magical place.”

The peak is one of the Nine Sisters, a row of volcanic mounds stretching a dozen miles from San Luis Obispo to the sea. Others are larger, but Morro Rock rests at the water’s edge.

The Portuguese explorer Juan Cabrillo named it in 1542 for a word meaning “round hill.” Quarrying in the first half of the 20th century removed about a third of the rock’s surface, and the material was used to build breakwaters in the harbor of Morro Bay.

If the climbing controversy isn’t resolved by the time the summer solstice rolls around in June, Balsamo said, the tribe may be forced seek a court order to stop the ascent.

“We hope we can come to a resolution on this issue in a positive way,” Collins said. “But we’re willing to stand up and not get kicked around.”