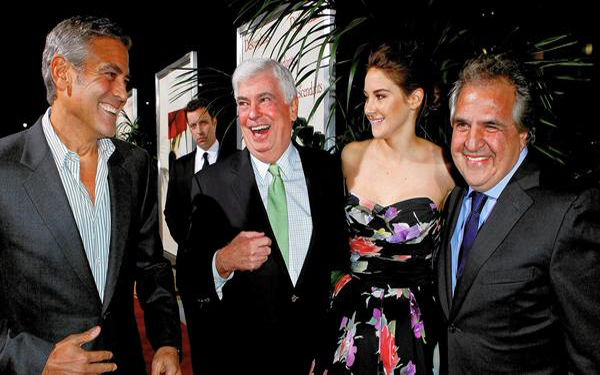 LOS ANGELES — Chris Dodd swept through Hollywood like he was still campaigning for office.

“This is a great American industry,” said Dodd, munching on shrimp salad at the Montage Beverly Hills Rooftop Grill. “No one produces the quality of film and television that we do.”

Since being tapped four years ago to head the Motion Picture Association of America, Dodd has been eager to demonstrate his influence at a time when the industry faces rapid technological disruption.

When the six major studios recruited the former Democratic senator from Connecticut four years ago, they wanted to restore the luster and clout the organization enjoyed under the legendary Jack Valenti, a former White House aide and one of the most visible personalities in Washington.

But the entertainment landscape has been transformed since Valenti left in 2004. Studios that once made most of their money on movies now rely far more on television, and they’ve been scrambling to respond to competition from the likes of Netflix and Amazon.

The sweeping changes have forced Dodd and the MPAA to rethink the role of a film trade group founded 93 years ago.

Complicating matters for Dodd, however, is that he reports to bosses who often don’t see eye to eye, reflecting the diverse interests of the media giants they belong to. The heads of the six major studios — Paramount, Sony, Universal, Warner Bros., Disney and 20th Century Fox — are all board members of the MPAA.

Dodd, 70, also faces growing scrutiny from board members over the costs and efficacy of an organization now fighting for influence with Silicon Valley.

“My impression is that Sen. Dodd is a thoroughbred who’s being treated like a workhorse,” said David Goodfriend, an attorney and lobbyist in Washington who has clashed with Hollywood studios over copyright issues. “One could easily expect multimillion-dollar movie studios headed by a former U.S. senator to be highly impactful in Washington. Certainly the Motion Picture Association has an impact, but not nearly as much as they could.”

The trade association was outmaneuvered by Google in 2012, when the Internet giant led an extraordinary campaign to scuttle the controversial Stop Online Piracy Act, known as SOPA. The bill sought to empower the government to shut down foreign websites engaged in piracy. But Google, Facebook and other tech giants feared the legislation would restrict legitimate websites and led a massive online protest to defeat the bill.

Another crisis erupted over the MPAA’s failure to speak out sooner in support of Sony after the recent and devastating hacking attack. Dodd tried to craft a letter of solidarity from the company’s peers. Sony’s Lynton drew support from Warner Bros. Entertainment Chief Executive Kevin Tsujihara, but other executives balked.

“We could have and should have done more for Michael and Sony,” Tsujihara said last month at the Code Media industry conference. But Tsujihara said there were concerns that issuing a statement might appear self-serving. “When you get lawyers and people in the room, things don’t happen,” he said.

Lynton threatened to withdraw from the MPAA, viewing it as out of touch and ineffective, several people familiar with the matter said. He reconsidered after meeting with Dodd and other studio executives to discuss possible changes to the organization’s mission and governance structure.

Dodd agreed with Lynton, but deferred to the organization’s board.

“We should have said more and done more at the time, but I work for these guys, they don’t work for me,” Dodd said in an interview.

The incident has prompted the MPAA’s board to consider scrapping its long-standing practice of making decisions by consensus.

“It’s like herding cats,” said one senior studio executive who asked not to be identified because of the sensitive nature of the discussions. “Everybody has a different agenda and a different way of doing things.”

The trade group, for example, was largely on the sidelines of the intense debate over regulating the Internet. Comcast, owner of NBCUniversal, strongly opposed the Federal Communications Commission’s recent decision to approve tough new rules that would regulate the Internet as a public utility, while other media companies were silent on the issue.

The same challenges bedeviled Daniel Glickman, the former congressman and Agriculture secretary who succeeded Valenti. “This is a tough job,” Glickman said. “It’s still a very important job, but it’s changed because the movie companies are no longer movie companies.”

Dodd, whose contract expires next year, does not appear to be in danger of losing his job. Several senior studio executives praised his role in expanding state film tax credits and pressing China — an increasingly valuable film market — to allow more foreign films into the country.

“He’s doing a great job of putting together a global operation, keeping our markets open, increasing our voice in Washington,” Gianopulos said. “He obviously has enormous credibility after 36 years in Congress and the Senate.”

But Dodd also faces pressure to rethink the trade group’s mission and who it should represent.

At a meeting last month, studio executives discussed the possibility of expanding membership to include television producers and Internet streaming services such as Netflix, people familiar with the meeting said.

“When technology is moving this quickly and media is changing so rapidly, any organization has to adapt,” Gianopulos said.

More members would bring more clout in Washington and increase dues. Some of the studios have balked at the rising costs of operating the trade group. Studios contribute at least $20 million each to support the MPAA, two board members said.

Under Dodd, the MPAA has ramped up its spending on lobbying, new hires and salaries. His own compensation in 2013 was about $3.3 million, well above the $1.1 million paid to Glickman in 2010, tax records show.

Dodd says he is considering various ways to reduce costs, such as leasing out space at the group’s Washington headquarters, but defends the increased spending on staffing. He notes Google has 100 registered lobbyists, compared with seven at the MPAA.

“We’ve had a hundred meetings with new members of Congress since November,” he said.

Dodd’s tenure has been marked by significant changes to the MPAA’s lobbying. The trade group terminated five of its eight lobbying firms in 2013, according to federal disclosure forms. In July, Dodd replaced Michael O’Leary, a holdover from Glickman’s tenure, with Joanna McIntosh, who had worked for both Verizon and AT&T, as executive vice president for global policy and external affairs.

A report last year by the Citizens for Responsibility and Ethics in Washington detailed numerous efforts by the MPAA to court Republicans, despite Dodd’s history as a leading Senate Democrat and the liberal leanings among Hollywood players. Among the new tactics: an increase in grants to such groups as the Republican Governors Association, which received $260,000 from the MPAA in 2011 and 2012.

Democratic allies have also been helped by the lobbying shake-up. Public filings show Howard Berman — the longtime Democratic congressman from Los Angeles and longtime industry ally — signed on to lobby for the MPAA last year. His firm, Covington & Burling, was paid $240,000 for the final nine months of 2014, records show.

The industry once didn’t have to work so hard to get the ear of influential politicians. It used invitations to parties at its 75-seat screening room in Washington to woo members of Congress, a practice that has been curtailed by new ethics rules.

The MPAA once believed that “it didn’t need to work very hard, that people were on its side,” said Melanie Sloan, who led the Citizens for Responsibility and Ethics in Washington when it issued last year’s report. “They were one of the hottest tickets in town.”