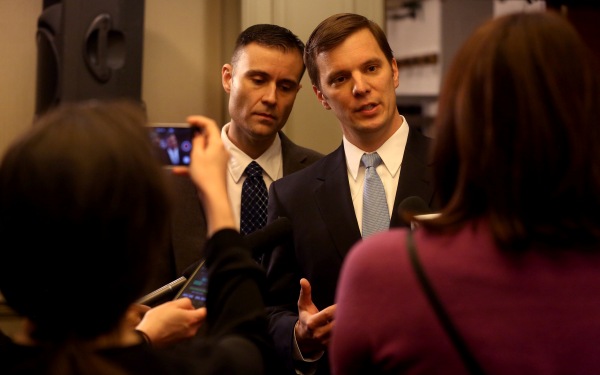 The national leaders of the embattled Sigma Alpha Epsilon fraternity plan to create a confidential hotline for reporting racist incidents such as the chant that thrust the group’s University of Oklahoma chapter into the spotlight, fraternity officials said Wednesday.

The hotline was part of a package of new diversity initiatives announced in Chicago by SAE executive director Blaine Ayers, who oversees 15,000 undergraduate fraternity members, only 3 percent of whom are black.

“Now we must begin a task of seeking forgiveness and taking steps to ensure that this never happens again,” Ayers said Wednesday at a televised news conference.

University officials, responding swiftly to national outrage, expelled two men they identified as leaders of the chant, despite skepticism from legal experts who thought the chant was protected by the 1st Amendment. The chapter has since retained Stephen Jones, the high-powered attorney who once represented Oklahoma City bomber Timothy McVeigh.

On Wednesday, the fraternity’s national leadership described the chant as an isolated and unsanctioned incident, but also said they are investigating reports of similar incidents at other chapters and launching a new set of diversity initiatives.

“How can you know? How can you call it an isolated incident?” one reporter asked Ayers. “That’s what the investigation is for,” the executive director replied.

Ayers said the fraternity’s executive leadership was planning to add “a director of diversity and inclusion,” the first such position created by any major fraternity or sorority.

All SAE members and staff will be required to take diversity training to be rolled out at chapters next week, Ayers said, and national leaders plan to create a “national advisory committee on diversity and inclusion” made up of undergraduates, alumni and outside experts to address diversity issues.

The new confidential hotline for reporting racist incidents would be similar to a hazing hotline that the fraternity created a decade ago, Ayers said.

“We will investigate every call,” Ayers said, adding that if any discrimination is found, “We will be swift in our response.”