Students strip down in demonstration at UC regents meeting 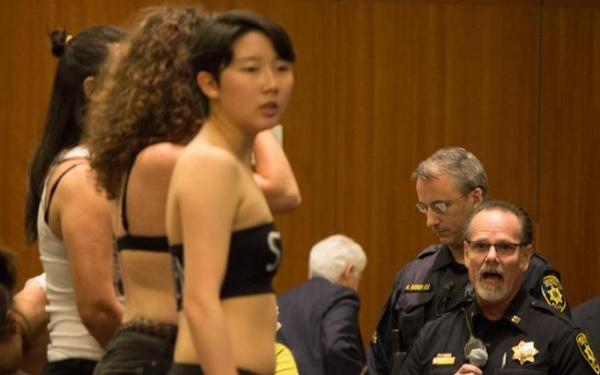 The UC regents meeting was interrupted Wednesday by a demonstration by students who stripped down to exercise outfits and underwear to symbolize giving the shirt off their backs for higher tuition.

The protesters were also demanding that UC Berkeley agree to local housing aid and union hiring if it proceeds with its plan to turn its underused property in nearby Richmond into a campus that could accommodate new global-oriented programs for as many as 10,000 students.

About 30 students chanted “People over Profits” and “Raise up Richmond, not Tuition,” and protesters stood on chairs in the meeting room at UC San Francisco, stripped off their shirts and threw phony dollar bills up in the air.

UC police lined up across from the demonstrators and warned them that they faced arrest if they didn't leave. After about 10 minutes, the protesters filed out and no one was arrested.

Among the demonstrators was Kristian Kim, a third-year UC Berkeley student who stripped down to a bikini-like outfit with the word “student” written across her top and “debt” across the bottom.

She said she wanted the regents to be confronted with the concerns of most students and that the proposals to raise tuition by as much as 5% in each of the next five years would be devastating to students.