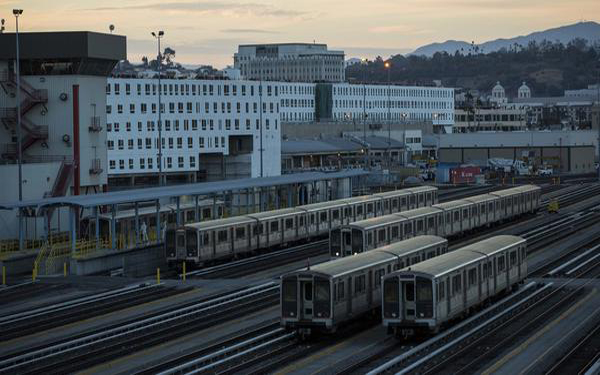 But that could change within a decade.

As part of a suite of rail projects slated for a rail maintenance yard along Santa Fe Avenue, the Metropolitan Transportation Authority is considering adding one or two Arts District subway stations on the banks of the Los Angeles River, according to a Metro staff report. If the plans were approved, Red and Purple Line trains would stop at least once to the south of Union Station.

Possible sites for Santa Fe Avenue stations include 6th Street and 4th Street, near the One Santa Fe apartments, according to a rough graphic included with the report.

The rise of the Arts District as a commercial and residential hub is one reason Metro is considering the additional stations, said David Mieger, the agency's executive officer for transit corridor planning. The arrival of condos, restaurants and hipsters in an area once reserved for warehouses and factories is putting the neighborhood's sparse transportation infrastructure to the test.

The other reasons, Mieger said, would be cost and convenience: A host of upgrades to accompany the debut of the Wilshire Boulevard subway extension would make it possible to add new stations more easily, at a fraction of the typical cost.

Currently, Metro trains reverse direction at Union Station after passengers disembark. But that will become impractical and less efficient once the Purple Line extension begins operating and more trains are using the same tracks.

The hope is that within a decade, trains will be able to head southeast from Union Station and reverse course at the Santa Fe Yards, the rail-car maintenance and storage site that borders the Arts District, Mieger said. But accommodating a higher volume of train traffic would require heavy construction, including changing the track configurations and widening rail tunnels.

The site may also need to be changed in some ways to support the bullet train, as well as a project designed to reduce travel times on Metrolink and Amtrak trains that pass through Union Station.

"There’s limited land area, and a lot of demand on it," said Nick Saponara, a Metro director of countywide planning and development. But, he added, including subway stations during the construction would be a cheaper way to address "what's typically a very expensive project."

In a 2010 report, Metro staff said building a station near 6th Street would cost roughly $90 million. That figure doesn't include the cost of acquiring land or rail tracks.

Before construction could begin, officials would need to find funding and review the environmental ramifications of the project.

"Revenue stations are something that everyone is interested in," Mieger said. "But there are a lot of other things that have to happen over there that have to be considered as well."

A more detailed staff report on the proposed stations will be finished later this spring.