When Do We Eat: Salvador Litvak's New Film is Full of Good Fun and Family Disfunction 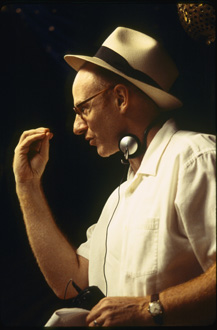 For Salvador Litvak, the director of When Do We Eat?, his little independent film carries a simple message: „Don‚t take yourselves so seriously and families can heal. But it takes work," he says about the film, which centers around a Jewish family's Passover Seder and apparently posed many challenges when it came to finding funding. After numerous failed attempts to find financial backing, Litvak and his writing partner and wife, Nina Davidovich, decided to take initiative and make the film anyway.

The result is a funny film that uses the ritualistic Seder as a context for exploring damaged family relations. In When Do We Eat a large, chaotic family led by patriarch Ira Stuckman (Ira Lerner) must get through the above mentioned Passover Seder. Problem is, not only are there 11 people at the table, but Ira must also cope with his emotionally unstable father (Jack Klugman) and his wife, Peggy (Lesley Ann Warren), who wants the family to have a perfect Seder.

"[The Passover Seder is] a very Jewish holiday. At that holiday, which is said to be the holiest time of the year, you recite the 13 attributes of God. So, God is always forgiving. God has all these great qualities that we all wish we had,‰ says Litvak, going on to explain how each character in the film was developed. "And what we said was, if each one of the members of his family is missing one of those qualities, [then] that‚s the source of the particular person‚s damage. That was the starting point."

When Do We Eat? takes these „damaged‰ characters ˆ which also include those played by Max Greenfield and Shiri Appleby ˆ through the Passover Seder, during which one of Ira‚s children slips a tab of ecstasy into his meal. As a result, Ira morphs into a modern-day Moses who‚s set on leading his hungry family to the Promised Land.

Combining spirituality and humor in a Jewish celebration may be a combustible mixture for many Jewish viewers, but Litvak seems to have the confidence and visual flair to helm a project that can provoke some audiences, while simply entertaining others. Showing the interplay between contrasting characters and using a combination of humor, character idiosyncrasies and turbulent interactions magnified what otherwise could have been a bland motion picture. Litvak and Davidovich wanted to join spirituality, family healing and humor in their take on Passover.

"We decided it's going to be this dysfunctional family dinner. We knew that our particular comedic tone would be pretty extreme because we liked that. It makes us laugh. Religion and humor do go together. In its broad sense, it's a very sophisticated type of comedy," Litvak says.

At the heart of the film is the visually colorful dinner scene in a tent. Having all 11 members of the family together in each scene proved a daunting cinematographic task. That was the key challenge for Litvak and Director of Photography David Mullen, who decided to use close-ups and tight shots in order to amplify each character's minute details and flaws, instead of relying on medium and wide shots. According to Litvak, the scenes in the tent had to be interesting because, as he says, "it's a dinner party but it has to be worth seeing."

The events that unfold during dinner are unforgettable and, according to the director, the overall and constant interaction among all the actors was integral to conveying the sense of family dynamic. The theme of the film is showing the tumultuous, positive, and negative characters and their interactions simultaneously.

"By the end of the movie, nothing is fixed but everyone has made some progress in their particular damage and the damage of the family," says Litvak, who makes a little comment about the film and being Jewish. "We're like everybody else. We have the same problems that everybody else has."

When Do We Eat? releases in select theaters April 7.
Article posted on 4/3/2006
This article has been viewed 2509 times.