Tournament’s first week was all over the map 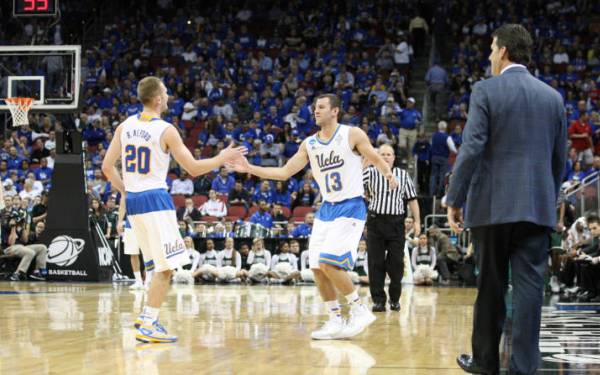 This year’s NCAA field was not trimmed, from 68 to 16, as much as it was hacked with garden shears.

The East saw its top seedlings turned into compost.

No. 1 Villanova got trashed by North Carolina State, which finished tied for sixth in the Atlantic Coast Conference.

No. 2 Virginia had lockdown defense thrown back in its face in a loss to nemesis Michigan State, which also knocked out the Cavaliers last year.

Anyway, welcome all, the expected and the interlopers.

The Pac-12, which had to apologize for getting four teams into this country club, answered by going 7-1 and sending three teams — Arizona, UCLA, Utah — to the round of 16.

The Big 12, awarded seven bids, needed a furious Oklahoma rally (against play-in winner Dayton) on Sunday to advance one team to the second weekend.

There’s a rumor going around that the regular season and the tournament aren’t even related.

And now we know why Kansas has been dodging Wichita State since 1993.

Kansas, an upper-crust property, views Wichita like a neighbor with four cars parked in the front yard.

Wichita got its chance in an NCAA-mandated matchup Sunday and took Kansas to the Midwest woodshed.

So much for getting a regular series with the Jayhawks.

The Shockers advance to play Notre Dame in Cleveland.

Last year, as a No. 1, Wichita State was pitted against Kentucky in the second round. This year, the Shockers had to beat Indiana and Kansas to advance.

This is like taking on more than half of basketball’s Mount Rushmore.

The tournament’s first week was, from Seattle to Charlotte, all over the map.

Top-seeded Kentucky, Duke and Wisconsin all survived, but others were not as lucky.

Who saw Duke vs. Utah and Gonzaga vs. UCLA in the South Regional semis?

And how often do you get Bob Huggins (West Virginia) vs. John Calipari (Kentucky), meeting in Cleveland, on a Thursday?

The NCAA didn’t have a great week. It talks about fairness and balance but strayed badly from its own principles in giving Dayton a home game for Wednesday’s play-in game.

If home court is worth two points then it worked out perfectly for the locals, with Dayton defeating Boise State by one.

“They were electrifying,” Dayton guard Jordan Sibert said of the fans. “I got to relive another senior night, I guess.”

Boise State’s NCAA player gift this year should have been … a shaft.

The tournament has more rules than the Internal Revenue Service, yet there were times when no one seemed to know what was going on.

Georgia State’s R.J. Hunter, with a three-point bomb, took down No. 3 Baylor.

Hunter, the dad/coach, embodied what the tournament means as he hopped around with the torn Achilles tendon he ruptured in celebration.

Quote of the week: “They put Baylor up at the Hyatt,” Hunter said. “They flew in here on a nice charter flight. They put us on a bus and put us in the Holiday Inn, and guess what, we get to stay another day.”

Georgia State’s request for a late checkout ended with Saturday’s loss to Xavier.

Bryce Alford, the coach’s son, beat No. 6 Southern Methodist with a three-pointer in Louisville that did not come close to going in the basket. The goaltending call on SMU’s Yanick Moreira was the low-light (“you really can’t review that?”) moment but it didn’t weaken UCLA’s belief that it really did belong.

Fueled by the anti-UCLA vibe, the Bruins responded by advancing to the Sweet 16.

In an offset to the dubious “goaltend,” officials in Seattle made no call at the end of Louisville’s 57-55 win over UC Irvine.

The Anteaters, making their first NCAA appearance, were denied a last shot when officials didn’t call a foul that Louisville was trying to give.

No big deal, Irvine makes the tournament every 37 years or so. And the team it almost defeated, Louisville, advanced Sunday by defeating Northern Iowa.

Thursday’s mayhem was followed by Friday’s sound of crickets.

Only an upset in the last game of the day, No. 11 Dayton over No. 6 Providence, prevented the higher-seeded teams from going 16-0.

The loudest noise made Friday was Providence coach Ed Cooley throwing his chair during a timeout.

The best “beer-league” performance was delivered in Seattle by North Dakota State’s chunky Dexter Werner, who scored 22 points off the bench in a Friday loss to Gonzaga.

“I would pick him up any day on a men’s league team,” Gonzaga forward Kyle Wiltjer joked.

The non-surprise was top-seeded Kentucky advancing to the “Round of 15 others” by breezing past Hampton and then winning a brats-and-beer road-rage brawl against bordering Cincinnati.

The game reminded of Jim Murray’s old line: “Cincinnati: They still haven’t finished the freeway … it’s Kentucky’s turn to use the cement mixer.”

“We don’t play dirty, but we use our bodies,” Cincinnati interim coach Larry Davis said.

The problem moving forward hasn’t changed. The tournament didn’t lose the team it needed to lose to make the next two weeks more interesting.

As long as Kentucky is still in, everybody else still feels out.