Millennial guys keen on style are reshaping the fashion trade 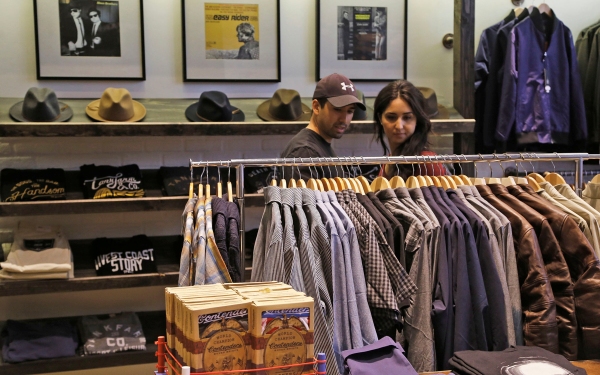 LOS ANGELES — The American male has long been judged a fashion dud.

The uniform of the Silicon Valley guy, after all, is a hoodie and T-shirt. Khakis and golf shirts show up on days other than casual Fridays.

But millennial guys in their 20s and 30s are transforming the menswear business, inspired by well-dressed male celebrities and TV shows such as “Mad Men” that celebrate bygone eras when pocket squares were de rigueur.

“Men are more in tune and more interested in looking good and sharp,” said Will McKittrick, an industry analyst at IBISWorld. “The younger generation is entering the workforce and beginning to spend a lot more on fashionable clothing.”

Although women’s clothing still sells more, menswear has been expanding at a faster clip.

Retailers facing a clogged market for the ladies are now sprinting to outfit the modern man.

Southern California has become a major hub for emerging menswear brands that deliver a distinct spin on men’s fashions.

The region’s affinity for street wear and its deep manufacturing base have nurtured dozens of budding designers for guys. When GQ magazine, considered a style bible by fashionable fellows, named its best new menswear designers of 2014, two out of the four were based in Los Angeles.

The surge in men’s apparel has even spawned its own lingo.

Analysts have dubbed the demographic driving the growth as the Henry (high earner, not rich yet) and the Yummy (young, urban male).

The looks that Henrys and Yummies are adopting to replace saggy jeans and T-shirts with ironic sayings? Among the archetypes: the modern gent (mixes suits with patterns and textures), the urban dapper dude (wears expensive street wear such as leather sweatpants), the upscale casual guy (goes for high-quality, high-cost basics) and the lumbersexual (a twist on the term “metrosexual” referring to guys in plaid shirts with well-groomed beards).

Menswear labels are not only delivering fresh takes on the male look, they’re also rethinking how men want to shop.

At J. Crew, which has opened a dozen male-only shops in the last few years, cutting down on the number of decisions men have to make is a key reason those boutiques have worked, said Frank Muytjens, head of menswear design. Guys trust that J. Crew has done all the “weeding” to offer the best styles, he said.

“Our guy doesn’t have time to think anymore. We did that for him,” Muytjens said, adding that J. Crew has come a long way since he started there 11 years ago. “We didn’t have separate men’s stores,” he recalled, “and I always felt that guys had to scale walls to get to their departments.”

Tankfarm & Co., which opened its second shop in November at the Americana at Brand in Glendale, Calif., is what co-founder John Anderson described as “Anthropologie for men,” referring to the eclectic retailer that carries women’s clothing, accessories and home goods.

Tankfarm offers clothing and shoes from its own label and classics such as Pendleton, along with items such as pocket knives, beard oil and pomade. The company also occasionally hosts whiskey and microbrew tastings.

“Guys hate the mall,” Anderson said. “They do not want to go to 12 different stores to get what they need.”

Sales at Tankfarm’s first store in Seal Beach, Calif., rose 40% in 2014 from the year before, while its online business doubled, Anderson said. Tankfarm is opening a third location in Huntington Beach in October and is scouting for a fourth spot.

“More guys are stepping up their game, especially the younger ones who are graduating college and not just scraping up beer money,” Anderson said. “This is just the tip of the iceberg.”

Those in the industry say the Southland is a prime spot for starting and growing guy-focused brands.

“There is certainly kind of a movement taking place in Southern California,” said Aaron Lavee, co-founder of John Elliott + Co, which was named by GQ last year as one of the best menswear designers. Another brand that made the list, surf-inspired M.Nii, is also based in L.A.

Street wear label En Noir, also lauded by the magazine, was co-founded by San Diego native Rob Garcia. The designer has since left the label to start a line under his own name. En Noir produces some of its clothing in Los Angeles.

Lavee said his label, with luxe offerings that include sweatpants costing $288 apiece, has found that its male shoppers are happy to spend extra to buy quality clothing that they can wear on repeat — thus avoiding additional shopping trips.

“A guy will have a pair of jeans and a sweatshirt that he will wear regularly,” he said. “Spending $198 on a sweatshirt makes more sense when it becomes a daily wardrobe.”

Like many young guys, Mitchell Holguin said his style has evolved from an early devotion to teen retailers such as Abercrombie & Fitch to more polished brands such as J. Crew. The 26-year-old college student, who collects photos of outfits he admires on the Internet, said he spends about $200 a month on clothing.

“I’ve come a long way,” said Holguin, who was browsing at the Americana at Brand shopping center with girlfriend Haleh Farhan. “He’s a bigger shopaholic than me!” Farhan joked.

The nascent fashion interest from many American guys has a fan in Rick Caruso, the sharply tailored magnate behind Americana at Brand and the Grove in Los Angeles’ Fairfax district.

Men’s clothing is one of the fastest-growing categories at Caruso properties, he said, with stores at the Grove and the Americana enjoying double-digit sales growth in menswear overall. J. Crew said its men’s shop at the Grove, which opened at the end of 2012, ranks in the top five best-performing stores by sales for the retailer nationwide.

Caruso, who still shines his shoes every morning, said his best advisor on up-and-coming brands is his 23-year-old son Greg, who is making a documentary on menswear called “Making the American Man.”

“It’s the younger male driving sales,” he said. “They know the products they want, they know the kinds of shirts and jeans. They do the research.”

Caruso said he’s on the lookout to bring in more menswear brands and potentially even barbershops.

“When I started building shopping centers 20 years ago ... menswear always struggled because men didn’t spend that much time shopping,” he said. “Now guys are spending more time not only on clothes but grooming.”