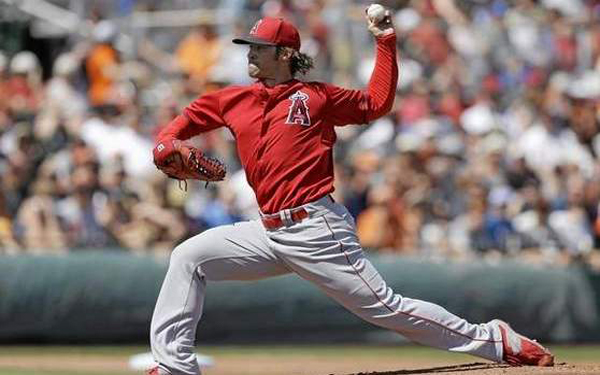 SCOTTSDALE, Ariz. - On paper, C.J. Wilson’s struggle this spring would appear to be physical.

The Angels pitcher made just his second start of the Cactus League season Sunday. He pitched well enough against the San Francisco Giants, allowing just two solo home runs in 4 1/3 innings, but he has only two starts left before the regular season.

For a starter who regularly throws 100 to 120 pitches a game, that’s not a lot of time to ramp up. Wilson threw 64 pitches Sunday.

No matter, Wilson said. This is exactly why he put in some extra work in the offseason.

“I usually come into spring training throwing two bullpens,” he said. “I was able to build my arm strength and my mechanics at the same time so I threw like nine or 10 bullpens.”

The key for Wilson from here might just be his between-starts work.

The 34-year-old left-hander is banking on some changes to his delivery adding up to a big improvement from last season, which was easily his worst in the majors as a starter. After going 17-7 with a 3.39 earned-run average in 2013, Wilson went 13-10 with a 4.51 ERA last year — 4.85 after he returned from a stint on the disabled list in July.

Wilson said early in camp that he might have rushed back too soon from the DL last year. Coming into this season, Wilson could have used a full camp to hone the adjustments to his delivery.

But he’s already been scratched from one start due to a minor knee injury and another because of the flu. Sunday, he conceded that his mechanics — particularly from the stretch — were still raw.

“I don’t have the GoPro right on the mound,” Wilson said. “You see me on the mound, I’m literally telling myself ‘get back, get the knees together.’ You have to be your own coach. There’s no earpiece, no offensive or defensive coordinator in the booth.”

Wilson said he will try to slow down his next bullpen session, “maybe bring a camera out there and look at it just to make sure I’m not repeating it over and over again.”

In spite of the time he’s missed, Wilson believes his arm will be ready come the start of the season. Hopefully the rest of his body follows.

“My delivery is positive on my arm,” Wilson said. “It’s just not correlating with a good location yet, at least today it wasn’t.”

Dodgers pitcher Hyun-Jin Ryu flew back to Los Angeles to meet with team physician Dr. Neal ElAttrache after a recurrence of discomfort in his throwing shoulder.

The left-hander received an anti-inflammatory injection Wednesday. He resumed playing catch this weekend in hopes of getting his throwing program on track in time to start the regular season on the active roster.

However, Dodgers manager Don Mattingly told reporters that Ryu felt something while playing catch Sunday, and the left-hander will begin the season on the disabled list.

Non-roster invitee Erik Bedard, who exited his most recent start Friday after one inning, was among the candidates to step into the rotation in case of an injury

But the veteran lefty was diagnosed with a strained latissimus dorsi muscle and will undergo an MRI exam. Mattingly told reporters that the severity of the injury won’t be known until the MRI results are analyzed.

Mattingly also mentioned younger pitchers Joe Wieland, Carlos Frias, Mike Bolsinger and Zach Lee among the top internal candidates to fill in. All four have been reassigned to the Dodgers’ minor-league camp, but would not have to be added to the 40-man roster.

The Dodgers and right-handed pitcher Pablo Millan Fernandez Rojas have agreed to terms on a minor-league contract with an $8 million bonus, a source confirmed Sunday. The signing was first reported by BaseballAmerica.com. Fernandez is not subject to Major League Baseball’s international bonus pool restrictions, so the Dodgers will not be taxed on the $8 million bonus or restricted in next year’s international signing period. He was primarily a reliever in Cuba until he successfully defected with his wife last year, according to a second source. Fernandez posted a 2.83 earned-run average in 2013, his last full season in Serie Nacional. ... The Dodgers reassigned IF/OF Kyle Jensen and OF Matt Carson to minor-league camp. Including pitchers Brandon Beachy and Chris Withrow, who are on the 60-day disabled list, the Dodgers have 41 players remaining in big-league camp. … Andrew Heaney will start for the Angels on Tuesday against the Texas Rangers, while Nick Tropeano will start a Triple-A game. It’s the second consecutive major-league start for Heaney, who is competing with Tropeano for a spot in the Angels’ rotation. … Matt Joyce (hamstring) will run the bases today and is expected to return to the Angels’ lineup in the next few days, manager Mike Scioscia said. “If he DHs, he’ll be able to get his timing,” Scioscia said. “There are a lot of at-bats left.” … Angels pitcher Garrett Richards, who is working back from knee surgery, will throw in a Triple-A game today against the Giants in Scottsdale. He will be limited to four innings or 60 pitches.