Exclusive interview with the cast and crew of Insurgent 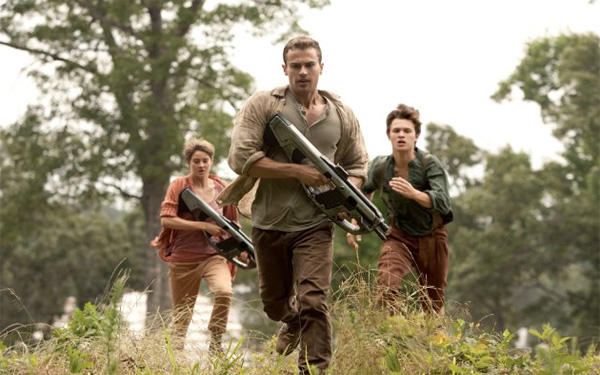 For all of those that might have been disappointed by Catching Fire, Part 1, and the hour and a half of plot building that came with it, Lionsgate is back with another one of its multi-installment, novel based, dystopian thrillers, and this time, Lionsgate nailed it. Insurgent is the second installment in the Divergent series. An action packed follow up to series that has already riveted fans, Insurgent is well executed, and to put it bluntly, pure fun.

The action is really what stands out with this film. “When we did Divergent some people referenced it as an action film and you know, maybe somewhat cockily I rejected that a little, but I think [Insurgent] definitely is without question. That’s not to say that it abandons the themes or the stories that it was rooted in, but it definitely feels like that. It’s fast paced and pretty electrifying,” said actor Jai Courtney in a recent interview with Campus Circle and the cast of Insurgent.

“That was kind of the goal for Robert when he came in,” said executive producer Todd Lieberman of director Robert Schwentke, “to say ‘I really want to blow it out and I really want to take the action to another level.”

Schwentke was a new addition to the crew, replacing Divergent’s director, Neil Burger. Being able to step into a series where the world has already been established, Schwentke had the advantage of being able to focus on other details. As actor Theo James put it, “the second movie around, you have that luxury of jumping straight into the action without having to explore characters and introducing them again.”

Producer Doug Wick elaborated by saying, “The thing where Neil Burger really had a tough job was the hardest thing was to establish a new coherent world, that the audience will want to go to, understand, and possibly go back to again.”

Actor Ansel Elgort was able to comment on Schwentke’s attention to detail; in his case, the director focused on character. “I remember the first day I came to set,” he said. “Robert sat me in a room for about 15-20 minutes and we really just talked about my character’s arc throughout the whole story, and he was like, ‘and we’re gonna keep having these conversations because they’re really important and I don’t want to lose your character throughout the parts where he’s not in it. Because it’s an important arc.’ And, I have a feeling he felt that way about everyone’s character and at the same time as being a big action director he was a great actors’ director at the same time.”

Another addition to the cast on this go around was Naomi Watts, playing the part of Evelyn. “She’s really interesting in this film because she has a very different energy,” said James of Watts. “She’s very calculating but at the same time she has a warmth and a kind of gentleness that almost juxtaposes what her real ambition is so it was kind of nice, in a way, because it puts you on the back foot, not only as the audience but as the character when you’re doing scenes with her. She’s not staring you down in any kind of abrasive way, it’s very lulling and sweet but intense at the same time. So I think those elements really lent themselves well to her character.”

New to the series, Watts was very intrigued by the depth. “I saw the film and was incredibly impressed,” she said. “The sense of adventure and fun, and at the center of it a great theme, which is this struggle of identity, who are we when we leave our families. Who do we become, what are we capable of. And that’s something that never leaves us.”

Watts went on to talk about her experience being on set and working with this pre-established cast. “When I arrived on the set it was a little scary because this was a very well oiled machine,” she noted. “I was just wildly impressed with how things were going and how fast they were moving and how disciplined all of these young actors were and how unified they were. They felt very connected and very collaborative so it was a great thing to be a part of and to join late in the piece, really.”

New team members aside, the star of the show is undoubtedly Shailene Woodley, returning in her role as Tris. Doug Wick could confirm that she really does command the screen in each of her scenes. “When we were casting the first movie,” he said, “and we were looking for the male lead, and we did a lot of screen tests, with almost every young guy that we said would be the next big movie star in town, and in each of the screen tests, Shay blew them off the screen. She was so strong she crumbled people, and we were really worried because we had a start date and Theo was the first person who came in, who in his own way, we felt two complete equals. And the same with Jai, which is that in terms of an adversary she has such a presence and is such a strong female, that you really do need strong male energy in the stories.”

But for Woodley, getting back into character was difficult. “I didn’t take into account that I myself had grown for a year,” she said. “I figured going back into her would be simple because I would just go back into that mindset, but my personal mindset had progressed a year in evolution and so I had to go back to who Shay was a year prior in order to get back into Tris’ mind.”

Woodley went on to describe her own fascination with the Divergent series: “One of the reasons I fell in love so deeply with Divergent originally was the relationship between Tris and Four, because it was grounded in truth and respect and authenticity, and it wasn’t based on a surface level physical attraction or infatuation. Tris and Four equally saw each other as individuals, that they were inspired by individuals that they were intrigued and curious about. There was a sense of mystique about each of them and I find it fascinating.

“I loved that in Insurgent their relationship is rocky, it’s not 100%, it’s not every time they see each other they feel safe and they feel protected and they feel like they’re able to be vulnerable. They put up walls against one another and that happens in partnerships. Everything has an ebb and a flow and I thought that that was one of the smartest things that Veronica [Roth] could have gifted to the young adult world, in a way, because there are lots of books that do that as well, but this one, to have that involved, and with an action film, with an action series, is quite rare.”

Insurgent is in theathers now.