You’re drinking your beer too cold, and here’s why 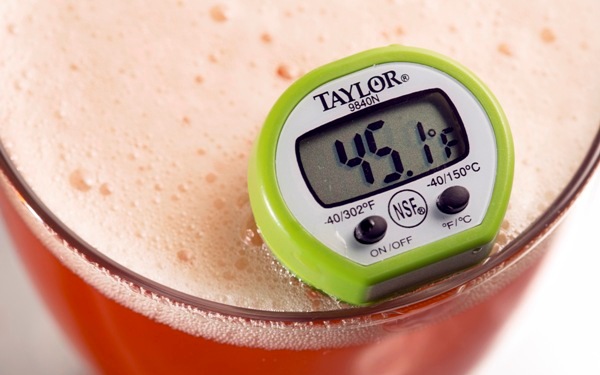 The ideal minimum temperature for most craft beer is in the low to mid-40s. For hearty yeast or hop-forward ales, a bit warmer. For even more adventurous styles, arguably as high as the upper 50's.
(Credit: Michael Tercha/Chicago Tribune/TNS)

I have a drinking problem, and it makes me order two beers at a time in bars and restaurants.

My problem is this: We drink our beer too cold, America.

Beer typically flows from taps and your fridge at a frigid 38 degrees, an ideal temperature for the mass-produced brews designed to be refreshingly easy to drink while obscuring the cost-saving ingredients within.

But for beers aspiring to some degree of nuance — arguably the definition of craft beer — 38 degrees is the equivalent of plastic wrap around a Kandinsky: It obscures all the beauty within. Sipped too cold, most craft beer is a shadow of what its maker intends, with layers of flavor lost to a palate-chilling cold.

The ideal minimum temperature for most craft beer is in the low to mid-40s. For hearty yeast or hop-forward ales, a bit warmer. For even more adventurous styles, such as lambics or imperial stouts infused with flavors of oak, bourbon, chocolate, coffee or vanilla, warmer still — arguably as high as the upper 50s. When you’re trying to meld an array of intricate flavors by pairing beer and food, proper temperature becomes even more important.

In the best bars, I therefore often order two (or more!) beers at a time: one that doesn’t mind the cold to sip immediately and one that’s higher alcohol, more complex and best served by 20 minutes of slowly warming. A double order sometimes furrows the brow of a bartender or companion — as if my drinking problem is far more serious — but of all the factors that influence beer taste, temperature is one of the easiest for a drinker to control. And so I do.

The idea of “cold beer” remains intact as ever, thanks mostly to the millions spent by Bud, Miller and Coors to show us slow-motion pulls of glistening bottles from teeming buckets of ice. It reaches in every direction, from the innocuous (bars proudly trumpeting their “cold beer”) to the egregious (bars serving beer in chilled or — heaven forfend — frosted glasses). Though to be fair, sometimes, cold is exactly what a beer requires.

“If I’m drinking a (Miller) High Life, I want it to be cold because I don’t want to taste it,” says Gary Valentine, a beer consultant and educator, who has worked on the beer lists at Girl and the Goat and Little Goat in Chicago, among other restaurants. “Otherwise, if you have a beer you want to taste, it should be above at least 43 degrees.”

That means being a proactive beer drinker: dual ordering in a bar or restaurant. If served a beer in a chilled or frosted glass, request a room temperature glass and make a careful transfer. At home, pull a beer from the refrigerator for 10 minutes to an hour before opening it. Or, if you’re Ray Daniels, founder of the Cicerone beer education program, stick a beer in the microwave.

“Ten seconds takes that frosty edge off,” Daniels says. “I used to do it pretty regularly.”

The Cicerone program, which has certified the beer knowledge of 50,000 people worldwide, spends ample time discussing beer style, storage, tap line maintenance and glassware but relatively little time on temperature “because of the practical challenges for making that happen and because there are so many other dragons to slay,” Daniels says. But as a consumer, he is acutely aware.

“It has a big influence on your perception of flavor,” he says. “That’s undeniable.”

Though Daniels no longer microwaves his beer — “I’m not that impatient anymore” — he does make a habit of wrapping his hands around a fresh-from-the-tap beer to warm the glass before taking a sip.

The issue is a beer’s volatile organic compounds. Bad for smelling when it comes to paints and cleaning products, VOCs are everything to beer, releasing the aroma and flavor (which combine to create “taste”) as they warm.

“So much of our sense of taste is in the sense of smell,” Daniels says. “In order to stimulate the olfactory nerves, you have to have volatile compounds enter the nasal passage and into the throat. If beer is too cold, it will release less aromatics.”

Daniels suggested an experiment: In identical glasses, pour a straight-from-the-refrigerator beer alongside a bottle that spent 20 minutes warming on the counter. Drink side by side. Voila — the joys of not-too-cold beer.

“If everyone ran at a different temperature of their own choosing, then it would be really hard to ensure proper beer quality,” Daniels says.

That doesn’t mean breweries and bars aren’t trying to do their part. Jerry’s restaurant and bar in Chicago’s Wicker Park neighborhood has considered serving barrel-aged stouts at room temperature, or storing them at room temperature and chilling them when ordered to about 50 degrees.

“But it takes less time to go from 38 to 50 than down from 70 to 50,” says Chris Coons, who recently left a job as beer buyer for Jerry’s to work for a beer distributor. “If I’m opening a barrel-aged stout at home that’s been stored at room temperature, I’ll put it in the fridge for about an hour to cool it to about 50.”

He called it “a signature beer geek move.”

“The general public isn’t getting into beer temperature,” says Coons at the bar one afternoon. “But they should be.”

Jerry’s general manager, Trey Elder, who spent 10 years working at three different Chicago coffee companies, chimed in: “Any extreme temperature, cold or hot, will mask flavor. At room temperature you’ll taste everything. When coffee is really hot, you won’t be able to taste that much. Coffees that are really amazing, you taste what’s amazing as they cool.”

Or in the case of beer, as it warms. The more complex the ingredients, the truer it is. At Moody Tongue Brewing Co. in Chicago, for instance, brewer and owner Jared Rouben focuses exclusively on food-driven beers — Sliced Nectarine IPA, Caramelized Chocolate Churro Baltic Porter and Dehydrated Tangerine Cacao Wheat are three recent releases.

On more than one occasion I’ve had a Moody Tongue beer at tap temperature and thought, “Eh — this is pretty good.” Twenty minutes later, the sentiment has usually changed to full-on “wow” as the complexity of the fresh ingredients emerged. Rouben professed no offense when I told him as much, and agreed that his beers are best between 42 and 55 degrees. That belief is what led him to pick a peculiar shape as the branded Moody Tongue glass used in bars: the 15 1/2-ounce Napoli grande, which, based on its design, steers a drinker toward wrapping a hand around the glass’ narrow base, which slowly warms the beer.

“In beautiful beers, all it does is open up layers,” Rouben said. “That said, I would encourage people to drink a beer at different temperatures and experience the changes.”

It’s a fair point. Beer isn’t just worth sipping at a precisely “proper” temperature, but across a range of temperatures that gradually unfold the flavor and nuance. Such an approach to beer drinking takes patience, thought and what some might consider fussing. But like wine, spirits or anything else worth drinking, the best beers reveal themselves across a journey of sorts.

Though, if you’re in a hurry, the microwave works too.