Musink brings tattoos and punk rock to the OC 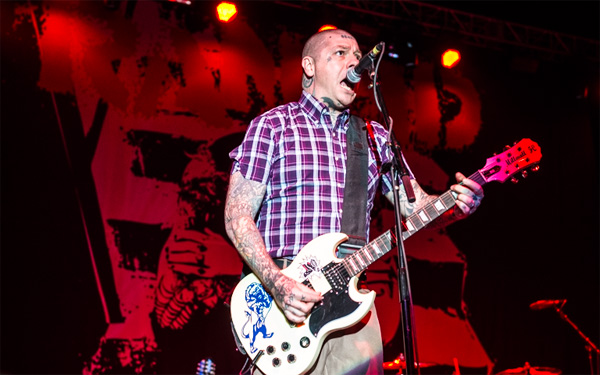 Last weekend, the Orange County Fairgrounds were taken over by heavily tattooed rockers, punks, artists and musicians. Two former airplane hangers were filled with tattoo artists and enthusiasts and the buzzing sound of needles and ink piercing skin. And it should not come as a surprise that the event was created years ago by Kat Von D and is currently carried on by Travis Barker, tow of the most heavily inked people in the entertainment industry.

Pushing the artists to present their best work, a “Tattoo of the Day” contest was in effect. The crowd was as diverse as the tattoo styles and techniques. Some were covered head to toe, some like me with a few here and there, and some who looked free of tattoos and nervous to be there. They of course had no reason to be scared; it was a great place to learn about any and all styles of tattooing.

The music was hard punk, with Rancid being a personal favorite for myself and many others in the crowd. Despite being around forever, the band erupted with high energy and classic punk rock attitude, opening their set with 1994's hit, "Radio."

Closing out the weekend, Blink 182 attracted moshers and crowd surfers to the fairgrounds. Before they hit the stage, security was already slammed with people jumping over the barricades and trying to make their way to the stage. Once Travis Barker appeared onstage, the audience pushed forward as much as humanly possible. Sunday night was their second show with a new band line up and it went surprisingly well. Earlier last week they went out for their first time at the Roxy in Hollywood and were met with rave reviews with Matt Skiba at the front. Skiba recently stepped in to replace Tom Delong, whose very public battle with the rest of the band has been making headlines. The band went on strong without him and the audience still loved the band and sang along with every bit.

As with each year, the Musink festival features great artists on the roster ready to tattoo. For tattoo diehards and also for those untouched by ink and needle, the event is a perfect place to admire art, rock out to some music and be merry. Until next year, ink lovers.