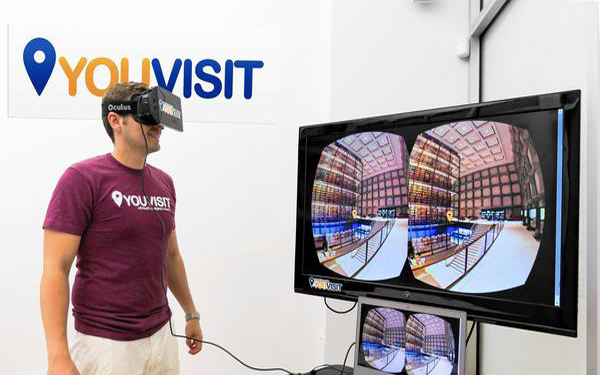 YouVisit co-founder Endri Tolka demonstrates use of a virtual reality system. About 25% of YouVisit’s clients use some form of virtual reality for recruiting.
(Credit: YouVisit)

LOS ANGELES — Payton Ricci stood in her living room with what looked like a tissue box strapped to her face. When she slid it over her eyes, she could see a college campus in Lacoste, France.

Looking up, she saw the town’s vibrant blue skies. Looking down, its cobblestone streets. When she spun around, she got a 360-degree view of the rustic Provencal campus. And when she took it off, she was back home in Palos Verdes Estates.

Payton was immersed in virtual reality, a tool being used by a growing number of colleges to recruit prospective students. The virtual reality market is in its infancy, and VR itself is still far from mainstream adoption, but colleges think it might be more attractive than brochures, phone calls and visits.

Yale University has an Oculus Rift headset, made by Facebook-owned Oculus VR, which it plans to deploy soon to recruit students already accepted for admission. It’s looking into Google Cardboard, a far-cheaper alternative made by the tech giant. The University of New Haven and Stony Brook University in Long Island are also dipping their toes into VR for outreach and recruitment.

Payton, a 17-year-old Palos Verdes High School senior, received a pair of low-end virtual reality goggles from Savannah College of Art and Design (SCAD) in Georgia last month. The college manufactured 10,000 cardboard headsets, shipped half of them to prospective students, and encouraged them to take virtual tours of its campuses in Savannah, Atlanta, Hong Kong and Lacoste. All a student had to do was fold the flat piece of cardboard to form a headset, load the virtual tour on a smartphone, pop it in and strap it to his or her face.

“I was expecting it to be something like 3-D glasses,” Payton said. “Since I was working with these cardboard goggles and my iPhone, I had low expectations going into it. I figured it would be something pretty basic.”

But the virtual tour made her downright giddy.

“I was talking to my mom and freaking out about these goggles because it was way better than I’d expected it to be,” she said. “It was super-realistic. I could see everything from every angle.”

SCAD is by far the virtual reality recruitment leader. At $5 a pop for manufacturing and distribution, the cardboard headsets are an affordable alternative to the high-end versions by Oculus and HTC, which are expected to cost hundreds of dollars when they are released for public sale later this year.

Will it pay off? The school doesn’t know yet. But officials believe it’s enhancing their efforts to attract students.

“Virtual reality is one way you can not just see but experience a place,” said Brad Grant, SCAD’s vice president of IT. “If you’re talking about a painting studio, we can get a camera assembly inside that environment, and when you put on the goggles you can experience what it would be like to be in a painting studio full of students.”

In Payton’s case, she toured the school with her mother in October, but her father wasn’t able to go. Through the cardboard VR experience, she was able to check out campus dorms and studios she’d missed on her first visit, and show her father the school she wanted to attend.

“He felt like he had the same experience I’d had,” Payton said.

The virtual reality tours for SCAD and Yale are powered by New York-based YouVisit, which works with more than 1,000 colleges and institutions around the world — including Harvard University, the University of California and San Jose State University — to create photo tours on websites.

As an international student, YouVisit co-founder and Chief Operating Officer Endri Tolka had been frustrated that there wasn’t a way to visit prospective schools short of spending a small fortune. He co-created YouVisit in 2009 in an attempt to mimic the campus-visit experience.

Many of the tours consist of basic panoramic photos of schools and museums. But as virtual reality becomes more accessible, interest from YouVisit’s clients has expanded. Tolka says about 25 percent of YouVisit’s client base has already started to use some form of virtual reality for recruiting purposes, and as VR headsets become cheaper and more widely available, he expects this number to grow.

“We see so many use cases for this,” he said, “whether it’s online classes or the ability to visit any campus. Imagine you’re a prospective student and you’re able to walk through your top 20 college choices. I think that’s a very powerful tool.”

Payton is inclined to agree.

“I’m not sure if it could replace being on campus because you don’t really get to experience the same feeling or the vibe you get from students when you’re in the virtual reality,” she said. “But it’s definitely a good first step. It could convince a lot more kids to pursue the university and go on a real tour.”