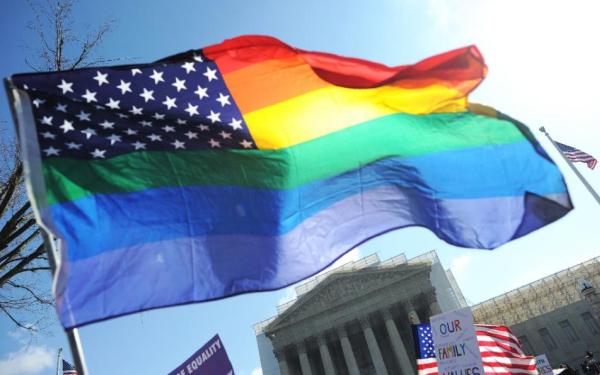 A rainbow flag is waved in front of the US Supreme Court in Washington, DC.
(Credit: AFP Photo/Jewel Samad)

Over the decades, California has chiseled out some of its most colorful laws at the ballot box.

There have been proposed initiatives seeking to allow public schoolchildren be able to sing Christmas carols, to require drug testing of state legislators, to outlaw divorce and to divide California into six states.

But the proposed initiative submitted by a Huntington Beach attorney that would authorize the killing of gays and lesbians by “bullets to the head” — or “any other convenient method” — is testing the limits of the state’s normally liberal attitude on putting even the most extreme ideas on the ballot if enough signatures are collected.

The proposed initiative has been met by a firestorm of anger, yet there appears to be nothing that can stop it from being given a formal name and advancing to the signature-gathering process.

For a fee of $200, Matthew McLaughlin submitted what he called the Sodomite Suppression Act to the state attorney general’s office, which has little choice but to give it a ballot-worthy name, summarize its effects and set the clock running for gathering signatures.

“Mr. McLaughlin’s immoral proposal is just the latest — and most egregious — example of the need to further reform the initiative process,” Assemblyman Evan Low, D-Campbell, said.

Some of California’s most controversial laws have been given life through the initiative process, though some lived only briefly. A 1996 initiative legalized marijuana for medicinal use, a law that still stands. Two years earlier, voters approved the so-called Save Our State initiative, which denied a public education and other benefits to those in the country illegally — a law that was quickly declared to be illegal.

Two lawmakers said they were so revolted by McLaughlin’s submitted initiative that they have proposed a bill that would increase the fee for filing a ballot measure from $200 to $8,000.

“We live in California, the cradle of direct democracy, but we also need a threshold for reasonableness,” said Low, who co-authored the legislation with Assemblyman Richard Bloom, D-Santa Monica.

But to get on the ballot, McLaughlin and any supporters he has would have to collect more than 365,000 signatures in 180 days, a high bar even for well-financed efforts.

“In California, this has the same chance as a snowball’s chance in hell,” said Jaime Regalado, professor emeritus of political science at California State University, Los Angeles.

Kurt Oneto, a Sacramento attorney who specializes in the initiative process, said Attorney General Kamala Harris does not have the ability to turn down McLaughlin’s proposed ballot measure, regardless of how she might feel.

“The state gets serious initiatives that are submitted and we get silly ones, and every now and then we get ugly ones like this,” Oneto said. “I would submit this is probably the ugliest one I remember.”

McLaughlin’s proposal calls same-sex intimacy “a monstrous evil” and says it would be better for gay people to die than for Californians to “be killed by God’s just wrath against us for the folly of tolerating wickedness in our midst.”

It also would make the spreading of “sodomistic propaganda” punishable by a $1 million fine, 10 years in jail or deportation from the state. And it would ban gay people from holding public office.

If the proposal collected enough signatures, it would be placed on the November 2016 ballot. If voters were to approve it, the decision on whether to make it a law would ultimately rest with the courts, which have overturned measures approved by the voters, including Proposition 8, which barred same-sex marriages.

McLaughlin could not be located for comment. The address he lists with the state bar is a postal box at a Beach Boulevard strip mall, his phone goes straight to voicemail and no one came to the door at the downtown Huntington Beach address where he is registered to vote.

The state bar shows that McLaughlin’s law license is active and that he graduated from the University of California, Irvine and then George Mason University School of Law. A Huntington Beach attorney with the same name and identical academic background submitted an initiative more than a decade ago that would have allowed public school teachers in California to use the Bible as a textbook.

“Even if you don’t believe its teachings, you’ll agree that it includes rich usage of the English language,” McLaughlin told the Los Angeles Times in a 2004 interview, saying that the Bible helped him become an honor student at Costa Mesa High School.

Earlier this month, the California Legislature’s Lesbian, Gay, Bisexual and Transgender Caucus filed a formal complaint against McLaughlin with the State Bar of California, asking that he be investigated.

An online petition at change.org calling for McLaughlin to be disbarred had more than 17,000 signatures Monday.

Dave Garcia, director of policy for the Los Angeles LGBT Center, said that anybody who signs McLaughlin’s proposal and “calls for the murder of gay people” should expect that “their names are going to be made public.”