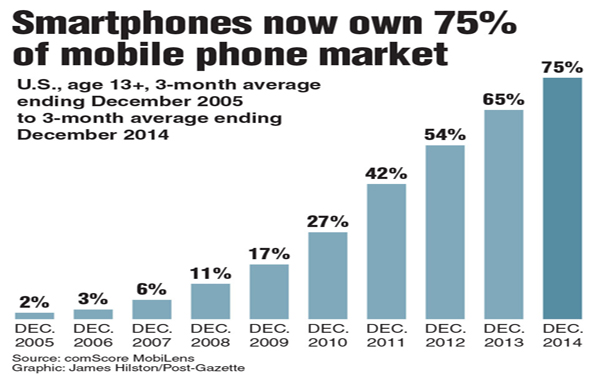 In case you haven’t raised your head long enough to notice the throngs of people gazing hypnotically at their smartphones, the nation has passed a milestone.

Smartphones now make up 75 percent of the mobile phone market, up from 65 percent a year ago and just 2 percent a decade ago, according to the Internet analytics firm comScore.

Put another way, three-quarters of Americans age 13 and older now have smartphones. Most other people have some other type of cell phone, such as a flip phone or TracFone, used mostly for old-fashioned talking.

The percentage of people who don’t own any kind of mobile phone is so low it’s not worth mentioning, said Andrew Lipsman, vice president of marketing and insights at comScore, based in Reston, Va.

“If you take a look at the big picture, it’s how mobile has taken over and become the dominant platform through which people engage in digital media,” he said.

Desktop computer usage has flattened out, but people are spending more time in front of a digital screen — whether it be on the way to work, throughout the day, sitting in front of the TV or in bed at night — because of the availability of smartphones and tablets, he said.

On the plus side, as a nation of smartphone users connected to the Internet 24/7, people are better informed and may be learning more quickly, Lipsman said.

Still, there are negative implications to consider, as well.

“Obviously, the drawback is what that (greater reliance on smartphones) means for how people engage with each other,” he said.

Dependency was strongest among the one-quarter of smartphone users who reported using their devices the most.

Among these top users, the majority said they used their phones “nearly all the time,” including while at dinner with others.

Twenty-one percent of top users said they could not maintain a relationship with a significant other without the apps on their phones, while 19 percent said they couldn’t find new friends without their smartphones.

Among all smartphone owners surveyed, 11 percent said they would be unable to be happy without their electronic companions.

It’s probably no surprise that younger Americans tend to use smartphones the most. Among every age group between 13 and 44, at least 85 percent have smartphones, according to the comScore survey.

Apple devices are the most popular, making up 41 percent of the market, followed by Samsung at 29 percent, LG at 8 percent, Motorola with 5 percent and HTC with 4 percent, comScore said.

As for the most popular smartphone apps, Facebook reigned supreme, reaching 70 percent of the app audience; followed by YouTube at 55 percent; and Google Play at 52 percent. Google search, also at 52 percent, and Facebook messenger, 47 percent, rounded out the top five.