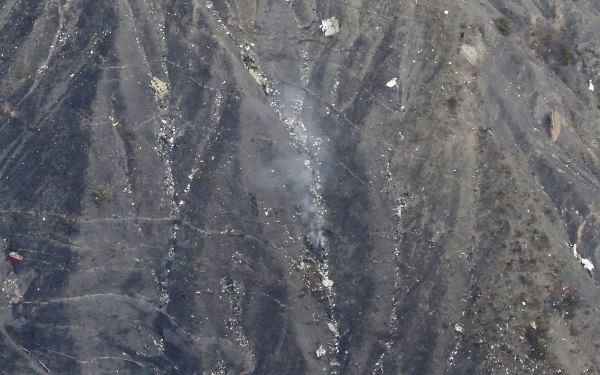 An aerial photo shows what appears to be wreckage from the crash of a Germanwings plane in the French Alps, between Barcelonnette and Digne, on Tuesday, March 24, 2015.
(Credit: Duclet Stephane/Maxppp/Zuma Press/TNS)

BERLIN — A German passenger jet that crashed Tuesday morning in the Alps in southern France, killing an estimated 150 passengers and crew, climbed for 44 minutes to reach its cruising altitude but remained there for only about a minute before it began to lose altitude, officials say.

The descent into the ground lasted just eight minutes.

The plane, an Airbus 320 flown by Germanwings, was en route from Barcelona, Spain, to Dussedorf, Germany, with 144 passengers, some of whom likely had paid as little as $32 for their seats. The French Interior Ministry placed the time of the crash at about 11 a.m. local time.

The ministry said it appeared that all passengers, the two pilots and four crew members died. Wreckage was found scattered in bits in the mountains at about 6,000 feet.

The nearest town was Barcelonnette, a small French village known for hiking and skiing amid rugged mountain terrain. Photos of the area from near the crash site show steep and snow-covered peaks, the rocky terrain interrupted only by dense mountain forest. There are few roads in the region.

In European media reports, local residents reported hearing a sound that made them think of an avalanche or one of the supersonic fighter jets that sometime train in the area.

At a news conference in Cologne, Germany, Germanwings officials said that the pilot had 10 years of experience with Lufthansa, Germanwings’ parent company, and that the plane had been given a thorough check in 2013 and a technical check on Monday.

They said that the flight left Barcelona at 10:01 a.m. and reached its cruising altitude of 38,000 feet at 10:45 a.m. The officials at the press conference said the plane maintained that altitude for one minute before beginning the eight-minute descent that ended in the crash.

They said that at this point they had no explanation for the descent.

Initial reports indicated that 45 of the dead were Spanish, while 67 were German.

“This is a time and an hour of great sorrow and great grief. We should be thinking about people who have lost relatives and also friends,” she said.

There was no initial report on the cause of the crash. Germanwings reported that the plane had been in service since 1991, having been purchased by Lufthansa.

Germanwings posted an announcement and updates on the crash on Twitter: “UPDATE: We are sorry to confirm that flight 4U9525 has crashed on the flight from BCN to DUS over the French Alps. It is a A320 aircraft. On board were 144 passengers and 6 crew members. Lufthansa and Germanwings have connected a telephone hotline (on freephone number 0800 11 33 55 77) to inform relatives of passengers and look after (them). All employees of the Germanwings and Lufthansa are deeply distressed and their thoughts and prayers are with the families and friends of the passengers and crew.”

The death toll is the highest from an aircraft incident in Europe since July 17, when Malaysian Airlines 17 crashed after being shot down over southeastern Ukraine, killing 298.

An official report into the cause of that fatal crash noted that the plane was taken down by a high-speed projectile. Ukrainian and Russian officials have blamed each other for being the source of that projectile. Last week, a Dutch television station reported that metal fragments found by their reporter in the wreckage had been analyzed and found to be from a BUK, a Russian anti-aircraft system.

Germanwings is one of several European carriers offering no-frills flights around the region. At the time of the crash, its website was offering flights from Germany for as little as 29 euro ($32) to 39 euro ($43) “to destinations all across Europe.” The airline website uses the slogan “surprisingly low-cost flights.”

There was no indication, however, that the accident had anything to do with the low-cost nature of the flight or the airline, especially as to date budget airlines in Europe appear to have good safety records. Germanwings is considered the third largest air carrier in Germany.