Portraits of Jewish life before, during Holocaust exhibited in L.A. area 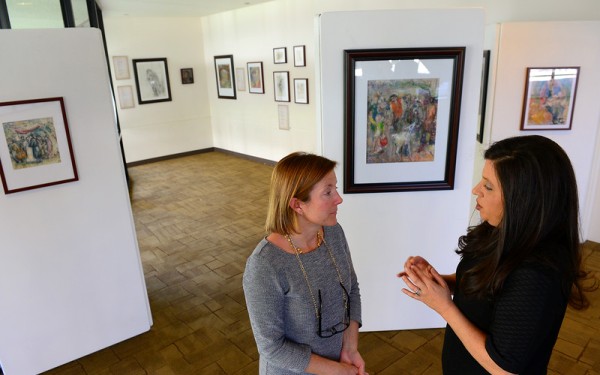 The late Lithuanian-Israeli artist David Labkovski survived a Siberian prison for eight years by becoming the resident tattoo and sketch artist for extra scraps of food.

Now, his artwork — which includes depictions of pre-war Jewish life in Vilna, his time in the Siberian prison and images recounted by Holocaust survivors living in Lithuania after World War II — is on display for the first time in the United States at New Community Jewish High School in West Hills. A larger sample of his work will also be exhibited at the Los Angeles Museum of the Holocaust starting in April.

“When you look at it, you can see the raw emotion, the detail, the emotion each person’s feeling,” said Leora Raikin, who is Labkovski’s great niece and a West Hills artist. “You can see his soul is in every single one of his paintings so you feel the loss, the longing, the desperation, the grief, the doom.”

While Labkovski was studying at the prestigious Art Academy of Leningrad in Russia in 1938, he was falsely accused of not being communist enough and sent by the Secret Police to a Siberian prison, Raikin said.

“For an extra piece of bread or a piece of potato, he would draw, sketch and tattoo,” Raikin said, noting that his talents got him out of doing much of the hard manual labor other prisoners were forced to do.

The only reason her great uncle, as well as his wife Rivka who followed him, were able to survive the war was because they were in Siberia, Raikin said. Starting in 1941, after a portion of Lithuania had been annexed by the Nazis, some 70,000 people from Vilna, now Vilnius, mainly Jews, were forced to march to the forest, where they were undressed and shot dead.

Some of these survivors shared their stories with Labkovski after he returned to Vilna in 1946, which became central themes of his art along with scenes of life before the war. He and Rivka moved to Israel in 1958, and in 1959, his artwork was displayed in an exhibit there. While critics gave him rave reviews, the public wasn’t ready to see the horrors of the Holocaust in art form yet, Raikin said. As a result, Labkovski and his wife decided they would not sell any of his artwork for two generations.

Labkovski’s Los Angeles exhibits were co-curated by New Community Jewish High School students, who wrote their own poetry and other reflections of the art, with guidance from the Los Angeles Museum of the Holocaust’s executive director, Samara Hutman, and school faculty. Several media students have also created a documentary capturing the students’ reactions to the art.

“It was a phenomenal experience,” Raikin said. “I can feel my uncle and aunt smiling down and saying, ‘At last, people care. They want to see the artwork. They want to share the story. They want to pass it on.’”

Raikin will lecture on Labkovski’s life at 6:30, April 17, Valley Outreach Synagogue in Chatsworth, and May 22 at American Jewish University on Mulholland Drive in Los Angeles.