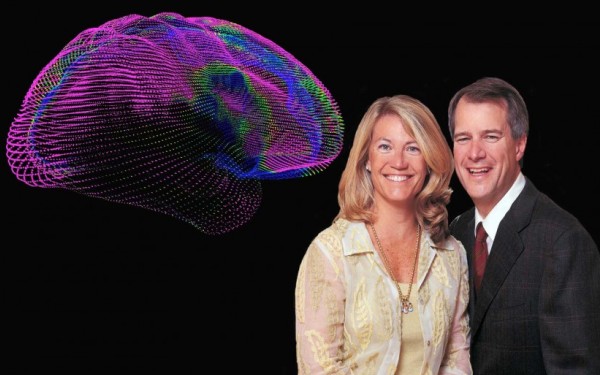 A Silicon Valley venture capitalist who is a USC alumnus and his wife are donating $50 million to a USC brain research institute in hopes of treating such disorders as Alzheimer’s disease, autism and traumatic brain injuries, university officials announced.

The gift from Mark and Mary Stevens will support the USC Neuroimaging and Informatics Institute being named after them, an interdisciplinary unit that includes medicine, biology, computer science and pharmacology and other departments at the university.

The institute’s leaders, neuroscientists Arthur Toga and Paul Thompson, and their research team moved from UCLA to USC in 2013 in what was described as an academic recruiting feat.

In an interview, Mark Stevens said that he and his wife consider neuroscience to be “the next great frontier in medicine and science.”

Stevens said he has “a front row seat” to the toll of such neurological diseases as Alzheimer’s, from which his father suffers. “If you look at the spectrum of neurological disorders, I would argue that it touches more families than cancer and heart disease. It touches youth and it touches old age,” said Stevens, who also noted that friends’ children have autism.

Stevens, 55, earned bachelor’s degrees in electrical engineering and economics from USC in 1981 and a master’s in computer engineering there in 1984. He later received an MBA from Harvard. He became one of the managing partners of the Sequoia Capital fund that bet on Google and other emerging tech firms. He now runs his own venture enterprise, S-Cubed Capital. An Atherton resident and USC trustee, he is on Forbes magazine’s list of billionaires.

The couple previously donated about $35 million to USC for such causes as a center for nurturing inventions and a program to help student athletes with their studies. They also have given large amounts to Santa Clara University, where Mary Stevens is an alumna and a trustee.

USC President C.L. Max Nikias said that the Stevens’ new gift will “be very transformative for the future of work in the institute.” Expanding what he called the couple’s “spectacular philanthropic legacy,” it will establish an endowment to help fund salaries and fellowships, he said. The specific terms of the gift were not disclosed, but Nikias said that it would be paid in full “over a short period.”

Toga, who is institute director, said the donations will, among other things, support research too preliminary to qualify for federal grants. “It really puts us in a strong position in terms of developing the intellectual cadre that makes you thrive and compete for grants,” he said. The institute has an annual budget of about $11 million, mainly from federal funding and foundation grants, and employs about 130 faculty, researchers and staff, Toga said.

Institute researchers are participating in an international effort combing through many thousands of brain scans and medical and genomic data to hunt for causes and possible treatments for schizophrenia, depression, multiple sclerosis and other brain diseases.

In 2011, USC launched a campaign to garner $5 billion in donations by 2018, on top of the $1 billion already given to the school that year. Before the Stevens’ announcement, USC said it had received more than $4 billion of the overall $6-billion goal.

At its start, that fundraising campaign was the most ambitious in American academia, but since has been surpassed by Harvard’s $6.5-billion goal by 2018. Stanford University in 2012 ended a campaign that originally sought $4.3 but received $6.2 billion.